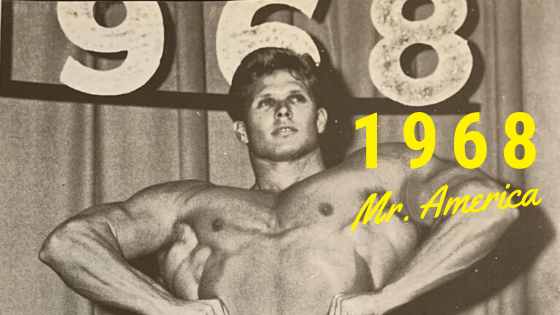 “On Sunday evening, June 8th, twenty seven contestants mounted the posing platform at the William Penn High School Auditorium to vie for the coveted Mr. America Title. As the audience got their first look at the men it was obvious that it was going to be a battle between last year’s runner-up, Jim Haislop, and Boyer Coe, a fifth place finisher in 1967. They were very evenly matched and very few of the 2000 fans who were packed in the auditorium were taking any bets on the outcome. 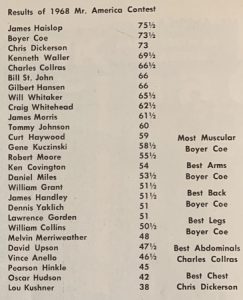 The final nod went to the Blond Hercules from Tampa, Florida, Jim Haislop, with 75 1/2 points. Jim has no weak points and his overall development eased him by Boyer Coe of Lafayette, Louisiana. Boyer ended with 73 1/2 points.

Boyer’s site and muscularity have to be seen to be appreciated. His overarm pose is perhaps the best ever with mountainous biceps growing from an iceberg-shaped triceps. The Louisiana physique star also copped the “Most Muscular,” “Best Arms,” “Best Legs,” and “Best Back” awards. I would have added the “Best Chest” for no compared with Jim in this category.

s Dickerson of Long Island, New York, finished third – a very close third. He was 1 1/2 points behind Boyer last year and eased to within 1/2 point this time around. He continues to improve and looks like he may be the first Negro to win the top physique title in the U.S. Chris won the “Best Chest” trophy and displayed his unbelievable set of calves to the greatest advantage. The biggest surprise of the meet had to be Ken Waller of Jeffersonville, Indiana. It usually takes two or three trips, at a minimum, to the Mr. A show to break into the top five, but Ken had everything plus 5 big athletics points and moved over some highly respected competitors. He should make his presence felt at the Junior Mr. USA, and Mr. USA contests this summer.

Chuck Collras of Los Angeles, California, was expected to do well and he did. He had won virtually everything in sight on the coast and made a fine appearance under the lights. Chuck grabbed the fifth sport in the scoring and won the “Best Abdominals” award.

Bill St. John, Gilbert Hanson, Will Whitaker, Craig Whitehead and James Morris rounded out the top ten. Bill St. John got my vote for the “Most Improved Contestant.” He looked terrific and should have, in my opinion, won the “Best Abs.”

Doctor Craig Whitehead also was very, very much improved over last season. He scored 4 1/2 more points than he did in Columbus, but ended up in the same relative position.

I was surprised at the placing of Will Whitaker. He was just behind Haislop in Columbus, but wound up 8th this time around. Personally, I thought he looked better than 8th – more like third or fourth. Gilbert Hansen looked better than ever before. I was very much impressed with him at the Junior Mr. America and if he works on his weaker points in the coming year he will have a shot at the title in ’69. James Morris impressed the judges and scored consistently enough to take the number ten position.

The 1968 Mr. America is certainly a credit to his chosen sport. He has spent a dedicated eight years working one goal – to become Mr. America. After his victories at the Mr. USA and Junior Mr. A shows there was no stopping him. Besides having the finest physique in America, Jim possesses a congenial personality and meets people very well. He will wear the crown well.”