In the World Wide Web it’s rumoured that only Arnold Schwarzenegger showed up to Mr. Olympia 1971 without opponents. But that’s just wrong, there were two mystery competitiors. One from Spain and the other competitor came from Lebanon. Sergio Oliva and Franco Columbo guest posed at this contest.

Sergio Oliva and Franco were suspended from the IFBB to compete at the Mr. Olympia. Over the years Sergio had a falling out with the Weider’s. It started with Sergio’s early demands for money from photos and the communication barrier due to Sergio’s poor English.

Then Sergio did some unsanctioned competitions and the Weiders decided to ban him from the Mr. Olympia 1971 and other competitions during his peak. This was a bad decision for everyone involved but Weider went on to make his fortune while Sergio was pounding the beat as a cop and making very little off his name

If you would search for the Mr. Olympia 1971 then you will find many results. I picked up this video with 600k views!
According to the narrator Arnold was the only competitor at the 1971 Mr. Olympia competition. And he also said that Sergio and Franco were allowed to guest pose because the Weider Brothers knew the fans were going to be dissappointed.

Serge Nubret was a french bodybuilder, who organized the 1971 Mr. Olympia in France and made friend with Sergio. The first time Serge met him was when he competed at Mr. Universe 1971.

Serge Nubret: “I wanted that the french people see both Arnold and Sergio but Ben Weider was not pleased with my idea. So Ben Weider asked me to refuse Sergio posing. Of course I refused Ben propsal but he tried and tried again and finally I told Weider if you refuse that Sergio pose, there will be no contest. I’ll pay back every ticket and NO MORE CONTEST. That’s why Sergio posed. I don’t keven know if Sergio knew about what I did for him.” 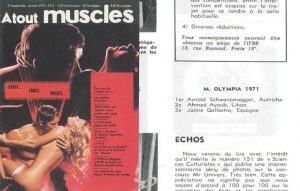 Arnold won the contest. There were two other bodybuilders: Ahemed Ayoub (2nd) and Jaime Gallostra (3rd).

In Iron Man Magazine (May 1972) Wayne Gallasch wrote, “The Olympia 1971 was something of an anti-climax, with Arnold winning in a ‘one horse race’ against two other men I had never heard of”.

And in “Beyond the Universe” Bill Pearl wrote, “The following weekend Arnold entered and won his second IFBB Mr. Olympia title in Paris, France. If my memory serves, only two contestants vied for the title.”