When a young fellow comes to Mr America Tom Sansone and asks him to set up some kind of a routine for him, he always try to impress the importance of proportionate development.

There is nothing more disheartening in bodybuilding than to see a rank novice wasting his time building a bulging biceps or pectorals that make him look like a walking bra ad and at the same time neglecting the rest of his physique.

According to Tom Sansone the body must be conditioned gradually up to the time that advanced methods can be utilized to full advantage. Otherwise, due to the rush of work forced on them without proper preparation, the muscle tissues will break down and keep on breaking down.

This of course defeats the original intention to build up the body, and the fellow who persists in using such improper methods will end up in worse shape than when he started.

Remember, a person who trains with weights exerts himself in an athletic manner, and just as any athlete must first condition himself before participating in full scale competition, so must the weight trainee prepare his body gradually before attempting the more advanced stages of training.

Even though every muscle group on an ideally developed physique should be outstanding when individually examined, they must all blend smoothly with the rest of the physique to form one harmonious whole.

Step into any gym. What do you see? Trainees working hard on just about every muscle group in the body. Some are beginners, others advanced bodybuilders. But with very few exceptions, they neglect a very important phase of their training. It’s almost a universal problem.

According to Sansone if you visit any weight gym and observe for yourself you will not find ten in a hundred bodybuilders including neck work in their programs.

The trouble lies in the early stages of their training history and a certain lack of motivation. In the beginning there was too much emphasis on the more popular muscles and not enough instruction on the value of symmetrical proportioning.

The neck muscles are the body’s barometer of condition. A man who is in ill health, who has lost his vitality, has a thin, scrawny looking neck.

The neck on this fellow has two large hollows at the back and is so weak that it allows the head of sag forward on the chest.

This actually causes respiratory trouble, for among the most important breathing muscles are sterno-cleido mastoids. The guy with the skinny neck and the padded shoulders, who may appear quite husky to the world at large when dressed in his tailored suit, to the trained observer looks like just what he is – a phone, a man who is all show, a man lacking in real nerve force, a hollow make-believe of what he actually should be. These are strong words, but they do express my feelings on the subject at hand.

The neck is very easy to bring to full massiveness; in fact, it grows too quickly for some bodybuilders. If you are one of those neck does develop rapidly, ease up on your training as soon as your neck begins to look to thick, or else you will look disproportionate for exactly the opposite reason that first prompted your neck training.

From any angle a weight trainee’s neck should appear powerful and yet possess some definition and it should be completely lacking in that disproportionate thickness that most wrestlers possess.

On the other hand, if the neck looks thin when observed from the rear or the side or from the front, then it needs intensive work to bring it up to par.

Don’t be afraid to work hard on the neck. Use fairly heavy weights when required. The same holds true for high repetitions. After each exercise, rub the neck with a rough towel and turn the head from side to side. Raise and lower the chin and keep the blood circulating in the area, thus helping the removal of waste products from the muscles and speeding recovery from fatigue.

Now for the exercises.

No. 1 is the front bridging movement. 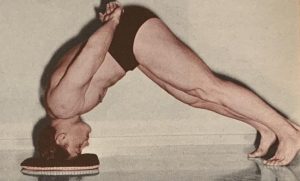 Kneeling down on the floor. place your forehead on a pad or a couple of folded towels. Thrust up with the legs and lock them the knees. This results in your body being bent in an angle at the hips.

Place the hands on the floor in a line with the head and take up a little of the pressure with them if your neck is weak. But after a few workouts you will find that you can hold the hands on the hips or behind the small of the back. Rock forward and back across the top of the head, first pushing forward with the feet, then thrusting back with the neck muscles. Keep the neck tensed throughout the movement. Do three sets of 10 reps. 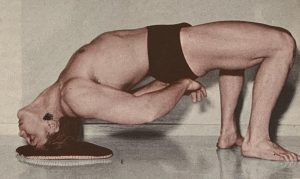 is the regular wrestler’s bridge in the supine position. A pad for the head is a necessity unless you happen to do your training where a mat is available. At first the weight of the body will offer sufficient resistance as you rock back and forth by rolling the head from the starting position until the forehead touches the pad and back.

This thoroughly stimulates the neck area. After several workouts you will find it easy to use a light barbell for added resistance. Hold the barbell across the chest. You will notice that if the head is occasionally leaning to one side slightly, extra pressure is placed on the muscles on that side, and so make a point of leaning to each side for full development. Repeat the movement 10 times and do three sets.

is the pullover in the wrestler’s bridge position. The starting position is the same as for the preceding movement. While holding the bridge, you simply do bent arm pullovers. Don’t be afraid to try these bridging exercises.

You have probably seen pictures of them many times and thought to yourself that is must be both difficult and uncomfortable. In practice it isn’t bad at all, so don’t pass it up. As with the first two movements, do three sets of 10 counts. Because it can be done at home as well as in the gym. 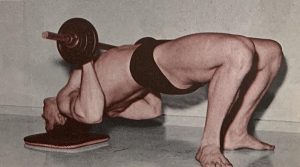 Clasp your hands together with the palms against your forehead. Then, while applying pressure with the hands, move your head slowly down and forward until your chin touches the chest. Next, while resisting with the neck, push your head back to the original position and repeat. Fifteen reps of three sets should be plenty.

No. 5 is also done with hand pressure for resistance. Place your right  hand on the right side of your head and push hard while resisting with the neck muscles until the left ear touches the left shoulder. Do 20 reps, then switch and use the left hand so as to work the opposite side of the neck. Two sets should be enough for each side.

When you have finished these exercises, stand up and rotate the head in a complete circle for a while and then finish off with a good hot shower, allowing the water to play on the muscles which have just been so vigorously worked.

It shouldn’t take too many weeks of neck specialization for results to become very apparent. Don’t make the mistake of overdeveloping this region, for when the neck is too large the shoulders begin to look narrow by comparison.

After all, you don’t want to wind up looking like a king cobra! Once you have attained the degree of muscularity your neck should have to make it blend proportionately with the rest of your physique, you will of course cut down considerably on the program outlined in this article, but it would be wise to keep those muscles in good tone and to retain your newly acquired neck strength by devoting a few minutes to neck work on a fairly regular basis. Remember, a virile neck is the sign of a real man!