Want an insider’s view of what powerlifting was like during the 1960’s? Rickey Dale Crain (a 148/165 lb superstar during the 70’s and 80’s) summarized it very nicely in this excerpt taken from the July 1977 issue of Powerlifting USA:
“As a true blooded powerlifter, who literally grew up in the sport, born with a York barbell in one hand and a bottle of Energol in the other, I can easily view the overall growth of weightlifting and powerlifting particularly in the last 20 years as nothing short of fantastic!” 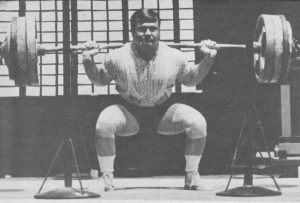 Jack did nothing in his career but break record after record. In Jack’s day, there wasn’t a man in his class that could stay with his squats. At that time he held the light-heavyweigh total of 1745 pound, and put on a few pounds and set the record in the 198lb class at 735lb. in the squat. 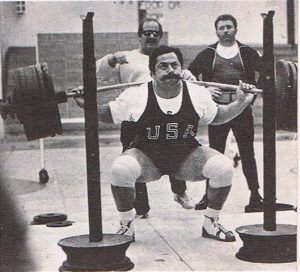 A phenomenon to say the least. George was one of the early pioneers of the power lifting game. There has never been a person with the determination of Frenn. He was a member of the U.S. Olympic Team and he threw the hammer. If my memory serves me correctly, he was also a world record holder. Before squatting with 800lb. Was fashionable George, at 242 pounds with a broken foot in a cast, squatted 854lb. At the time, few super-heavies did this great poundage! We thank you George for persistence beyond human pain

In March, 2004, George Frenn was inducted into the National and California Powerlifting Hall of Fame.
The ceremony was held prior to the USPF California State Powerlifting Championships at the Joint Training Base in Los Alamitos, California. Presenting the award is Major General Jeffrey L Gidley. 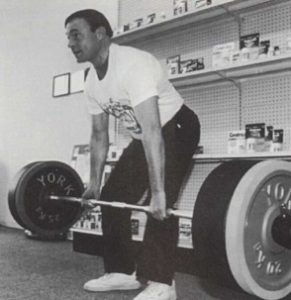 Jack was a World Champion back in 1972. At the time, Jack’s super squats and record breaking deadlifts said it all. In 1972, at 148lb., Jack did 605 in the deadlift. He was one of the eraly pioneers in powerlifting, cuminating his career with a 1400 total. I know if Jack wanted to, he could do it again tomorrow. 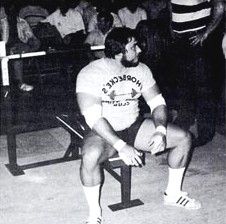 In the Honor Roll, Jon Cole has to rank very near the very top. Jon was never a full fledge super heavyweight, but always remained around the 280 mark at the time most heavies were above 300 pounds plus. Jon was a human nerve. He could excite his complete body into action, Jon at the time squatted 910.3 and bench pressed 580lb. Jon was certainly ahead of his time, and with an added 30lbs., there would be no telling what Cole could have accomplished in the poundage field. He was a world record holder in two different classed. John ended up a strength coach for a college football team in Arizona.

Won the World Championships three times crossing the waters from England. He is a great author among many other things. At the first World Championships, Precious was the smallest man there, and Jim Williams was the biggest. Jim sat Precious in hishand and as he laid back onto his shoulder, a picture was snapped! He was really tiny, but a giant of a power lifter.

Collins placed second at the National AAU Meet 1966. He totaled 1140 pounds. In 1965 at the York meet he placed third with a total of 1185 pounds. He was successful in increasing his total, once by 75 pounds and the second time by 45 pounds. He held at this time all existing Oklahoma records in the bench press, squat and deadlift. 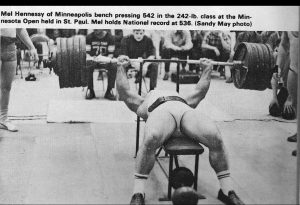 Most of you guys don’t know Mel, he was the smallest giant ever seen. He was an avid 550lb bench presser and a man to deal with. Mel was at that point in powerlifting, one of the best built dudes around. He has a decent squat, and always brought the crowds to a halt. Mel’s name on the mike meant perfection on the bench. Mel gave perfection to powerlifting. 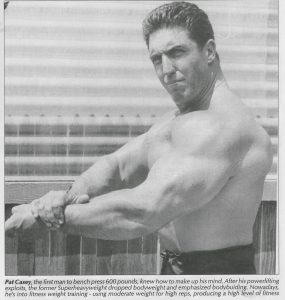 Considered the grandfather of Powerlifting; not only was he a behemoth of a man, but Pat Casey was the forefather of the bench press. In 1960, the 20 year old Casey weighed less than 240 lbs and was also handling over 300 lbs in the military press, 160’s for dumbell inclines, and 90 lb dumbell curls.
Pat Casey became the first man in the world to do 600lb. in the bench press. This feat no other man had attempted officially until Pat came along. Shortly after, Pat did 617 pounds which remained the world record for several years. Pat Casey was a policeman in Belflower, California. 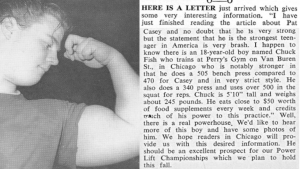 Over in Los Angeles, the young lifting phenom Pat Casey was enroute to a 500 lb bench which he finally made in training on February 9. On the other hand, Casey’s cross country rival, Chuck Fish, was the subject of considerable controversy over his alleged lifting feats in Iron Man Magazine.

Joe is not be sold short, no one person has done more for powerlifting than the Doc. He has never backed up from any major meets, but has come forth with his wears. He is a record holder and has totalled near 1600 pounds.
Robert Weaver (january 23, 1938 – Died january 28, 2017) 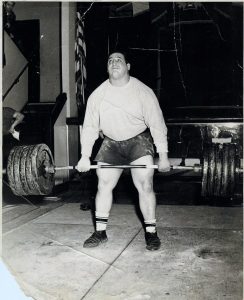 Big Bob was from the keystone State – Pennsylvania. Hailing from Pittsburg, Pa., he was one of the largest men to participate in power lifting. It could be said that Bob was the first man to squat 800 pounds or better. In between accomplishing that feat, he also became a world record builder for the total poundage. 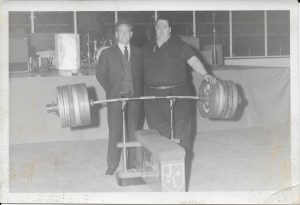 Jean Louis Auger was a Canadian strength star who was heavily promoted in Joe Weider’s magazines (much like his compatriot’s Hepburn and Cote had been: no surprise given Weider’s Canadian roots). Trouble is, Auger was not able to duplicate his strength feats outside of Canada. His “official” world record was supposedly for a 620lb “Push Bench Press”: big claims for 1964. 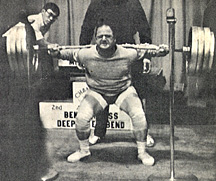 Bill “Peanuts” West was proprietor of the original Westside Barbell Club in Culver City California during it’s heyday from the early 1960’s through the 1970’s. Before he started the Westside Club, Bill would often be seen training at Muscle Beach during the late 50’s and used copious quantities of peanut butter and jelly sandwiches to bulk up, hence the “peanuts” moniker. The Westside Barbell Club (actually a couple of different garage gyms owned by West), became famous for its strength training innovations and elite clientele. Name lifters like Pat Casey, George Frenn, and Steve Marjanian were training regulars during its heyday. Countless other future legends of more recent vintage (e.g. Louie Simmons and Dave Shaw) would gain inspiration from Bill West and his hard-core minions. 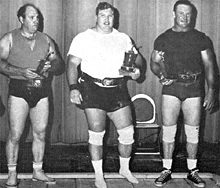 Above: Ed Moerlins, Terry Todd, and Wilbur Miller at the 1964 National Powerlifting Tournament. Terry Todd enjoys the distinction of having been the first Senior National champion in the Heavyweight class back in 1965. He was also the heavyweight National Powerlifting “Tournament” champion the year prior and would set 15 unofficial “world” records during his short powerlifting career. Before he retired in 1967, Todd would become the first lifter to officially post totals of 1600, 1700, and 1800 lbs in competition. His best official lifts were 720 squat, 515 bench, and 742 in the deadlift. 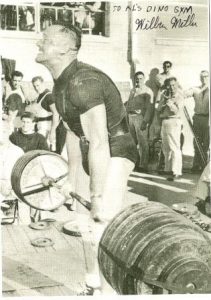 Wilbur Miller (b. 1935) was at one time considered the best amateur deadlifter in America, pulling an official AAU record 705 lbs in 1963. A year later he pulled 715 at the first National Powerlifting Tournament held in York Pennsylvania. He was a Kansas farmer at the time and weighed 245 lbs. The photo from which the above image is taken was shot at a Missouri Valley meet and shows Miller pulling 680 lbs. Notice the tape holding all those plates together? 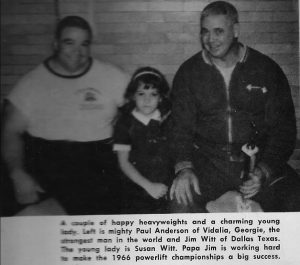