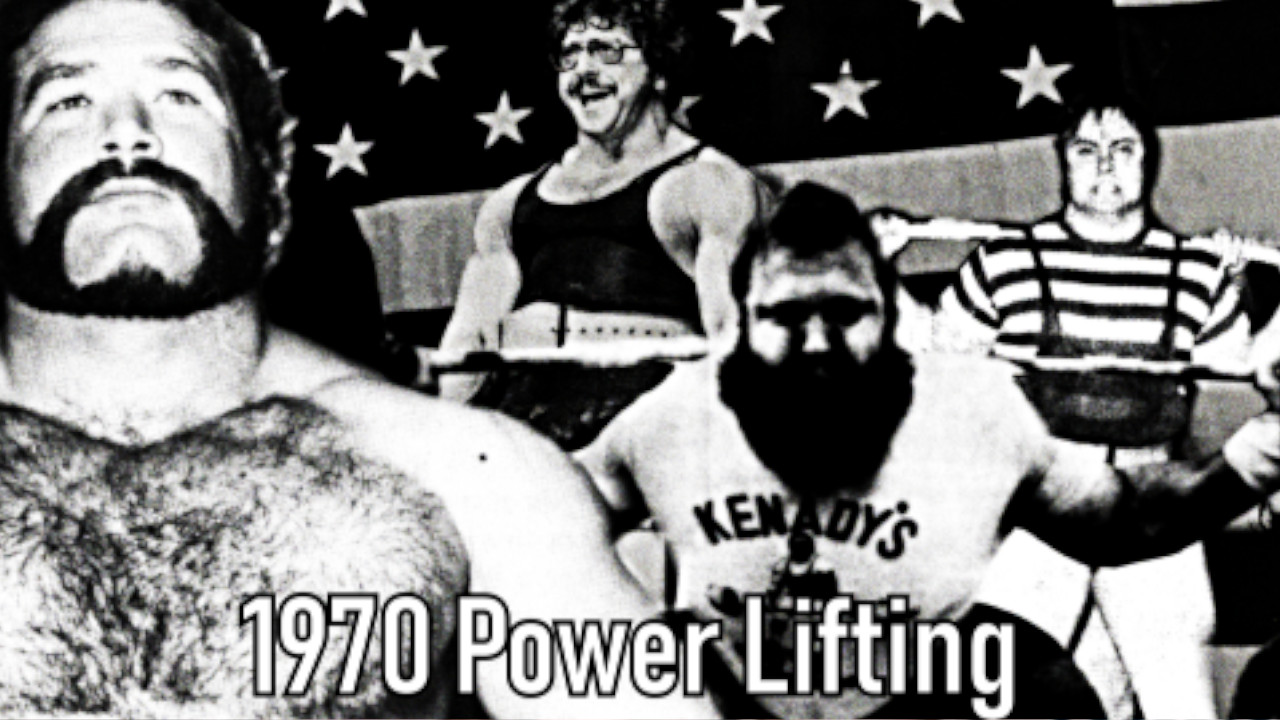 The 1970’s were a fantastic decade in powerlifting history that saw many all-time lifting barriers fall and/or nearly fall. In the squat, 900 would first succumb in 1972 compliments of either John Kuc or Jon Cole (depends on whose side you want to take) and we would have Joe-Joe White’s close miss with 1,000 lbs in 1977. The all-time bench record would climb from Pat Casey’s 1967 record 617 all the way up to 675 by Jim Williams in 1972. The Scranton leviathan would barely miss 700 at the same meet. 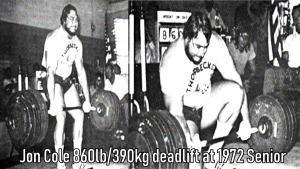 The deadlifting records would skyrocket thanks to Jon Cole and Don Reinhoudt: 900 was nearly made on more than one occasion. Also the all-time total record: from a “paltry” 2000+ during the late 60’s to just over the 2400 lb mark a decade later by big Don Reinhoudt. 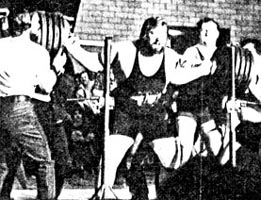 Were changing gear standards the reason for so much improvement across the board? No way! See that picture of Joe-Joe from 1977? That’s a singlet he’s wearing. The sport hadn’t yet “evolved” to the extent that one could expect “huge” improvements from equipment use: the first suits and wraps during the 1970’s were only a little better than the ace bandages and weightlifting suits of the late 1960’s. And the cut-off jeans? Still popular training aids but you didn’t want to get caught wearing them in a meet! 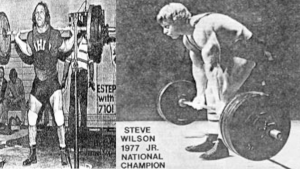 No… the records were improving because the sport was taking off! Powerlifting was growing by leaps and bounds during the 1970’s. Lifter registration was closing in on 5,000+ by the mid-70’s and nearing 8,000 by 1980. Television coverage was being provided. The major networks were actually after us! The first mainstream publication ever written about powerlifting was released in 1978. The International Powerlifting Federation (IPF) was born in 1972 and we had nearly 20 nations participating in the IPF World Championships before the decade was over.

Powerlifting during the 1970’s would see many changes on the political front as well. In 1973, a semi-autonomous Powerlifting Committee was created within the AAU hierarchy and our sport finally got its first Powerlift Chairman, Charles Gschwind. But not everything was coming up roses. Wrapping was still frowned upon by many within the AAU hierarchy. This would lead to their complete BAN in 1973!

A 320lb giant of a man. The most feard super squatter in history. No man alive has made assaults above the 1000 pound mark like Dave. If there is a record, Dave has squatted 900 plus more than any other human alive. Waddington comes to no suprise as the greatest squatter of our time. Dave has unofficially done 1003.0 lb. It didn’t happen to end there either for Dave has also bench pressed 580lb. If you talk about total poundages too, you must include Dave also because the giant has done in excess 2300! Mr. Thighs.

When talking about giants, most people think of Goliath, or Ishbebenob, who was a brother to the giant, but let me inform some of your later comers who the real giant of our time in powerlifting was, Don Reinhoudt.Don was an olympic shot-putter and his wife, Cindy Watt, was on the woman’s Olympic team. Don stood in the neighborhood of 6’4″ and sometimes weighed around 380 pounds. WOW! Don went even further than that, he bench pressed 606.27lb and squatted 934.6. Did he stop there? By no means, but deadlifted 887 pounds which was a world reocrd. Don held the world record squat and was the very first man to total 2400 plus pounds for three lifts.

Brother of Bob Young, the professional football player. One would have to see Doug to really appreciate him. Doug Young was not necessarily a giant, but me reminds you of the one called the giant killer. Doug looked like the ultimate bodybuilder with power to spare. In the days when overgrown super heavyweights roamed the earth with 600 pound benches, Doug, at 275lbs., did 611.8 – simply magic!

The man with good lifts in each class. Kenady is the schoolteacher of the powerlifts. Can you imagine a man who can squat 914.9lb/414kg; bench press 590lb/267kg and has done 904lb/410kg (world record) in the deadlift. The only thing that has hampered this veteran is putting all the lifts together at the same time. He can be said to be one of the most feared supers because his ability to go all the way anytime. Doyle has offered much to the game. FEAR! 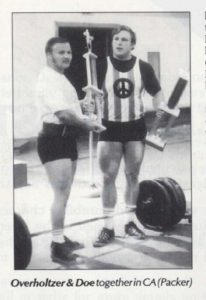 Tom Overholtzer came into his own as a powerlifter while training at California’s famous Fuddpucker’s Gym. Tom and many of his west coast contemporaries gained notoriety during the late 60’s and early 70’s as exponents (some would say “abusers”) of knee/torso bandaging and the layering of extra garments under the lifting singlet in order to boost one’s squat and deadlift. Such practices led to a tightening of gear rules after the 1968 Los Angeles Seniors. To his credit, Overholtzer was the only member from the California contingent that returned to Senior National competition in 1969 to compete under the new gear standards. 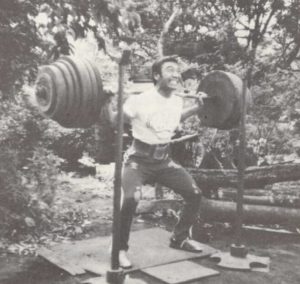 He has won 12 world championships. Hideaki Inaba is japanese and represents his country impeccably. Who, but a master craftsman could compile such a record of 12 world championships.  At 52 kg class, he’s totaled an astonishing 1272lb. He squatted 534lb/242kg; benched 236lb/107kg, and deadlifted 518lb/234kg. Talk about giants, and inaba has a front row! He too has shown that a small man can do it too.

Franklin Riley (Birth date: november 20, 1941 – Died december 21, 1981)
Was one of the hottest Feather-weights in the world. Frank became, in one year, both Senior National Champion and World Champion in 1972. Frank had warriors in his class like Bryon Benoit, Milt McKinney and Allen Lord, but Frank rose to the occasion and therefore will be in this Honor Roll as one of the finest feathers to grace the powerlifting stage. 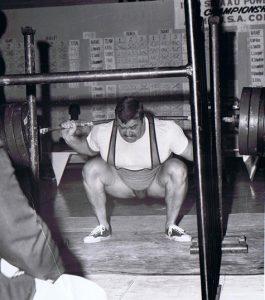 A gentle giant and school teacher from Oxenhill, Maryland. What made Hugh so important to this list is: he was a world champion super heavyweight, he had no really outstanding lifts but his lifts were even enough to allow him to become the world champion. Hugh Cassidy can be proclaimed the first real mind of power lifting. Hugh knew the ins and outs of development and could be called a vitamin bible. 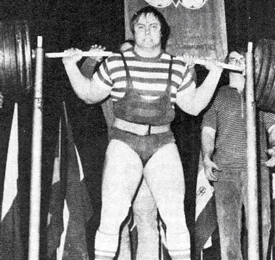 A prodigy of Big Jim Williams, and a giant of his own. John Kuc was an ex-marine from Kingston, Pa., with all the abilities of a champion. John was in fact, later in his career, a world record holder and champion. I don’t think there’s a person alive in the Powerlifting buisness that doesn’t know John Kuc. What did John do for us, well let me start by saying he bench pressed 272.2kg/600 lbs. And squatted 410kg/905lb and John didn’t stop therefore his best lift is a deadlift in which he has done 395kg/870lb pounds. Today, John is one of the founders of drug-free meets.

Full Article about him: John Kuc: The Strong Silent Type 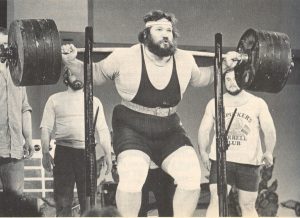 Most of the youth today will not remember the colorful JoJo White. Joe was a big farmboy who later in manhood would develop into an excellent squatter. Well listen, number one, when heavyweights were pushing to squat 900lbs., JoJo White was attempting the 1000 pound barrier. Many that have seen Joe squat the very first 1000 pounds still believe he should have gotten credit, but instead it was turned down for height. Joe White later made a 920lb/417kg 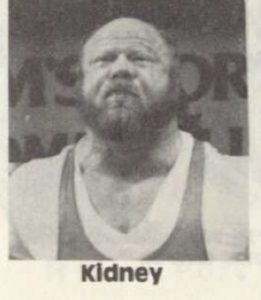 He is not a youngster and therefore has put this time in. Larry is definitely a world champion and is to be dealt with in the 275-lb. Class. 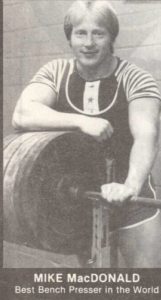 Mike McDonald was so good in the bench press that in the Junior Nationals he benched 540lb. For a record. Don’t think he stopped there either, for Mike has held the bench press record in several different classes. Word has it that Mike may have done 600 lb. In the bench – how about that? Mike offered to the powerlifting world and offset benching bar to allow greater resistance. He’s also offered himself as a superior bench press annalist – Mike!

What can be said about Superman? Nothing of course That’s who larry Pacifico is. He was nine times world record holder and champion in the lighter classes he reigned supreme. Larry bench pressed 590lb/267kg and squatted 832.2lb/377kg His contributions to powerlifting range from his feats in competition to some of the best meets ever ran. 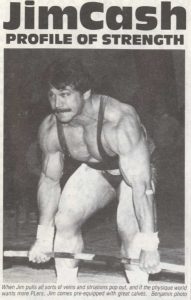 James had been coming up through the ranks as a 198 lber during the late 70’s and had a 1945 total to his credit. During the 1980’s however, James’ best competition lifts would skyrocket and included an 815 squat, a 485 bench and an 845 deadlift.
James made his mark as a 220 lber in 1981 when he defeated the 9 times World Champion Larry Pacifico at the USPF Senior Nationals. 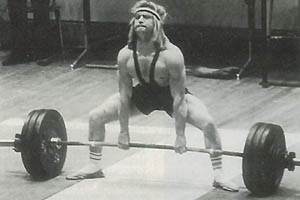 Great Britain’s finest has come to the american shores with the pride of a champion. Not only did Eddie come to these shores, but he indeed became a world champion. Eddie has done near the 1500 pound barrier and is only second to himself. The years that Pengelly has participated has lent foreign intrigue to the mystery of lifting weights. 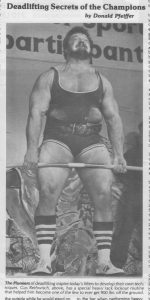 Mr. Contest himself. I don’t think there’s another person anywhere who has done what Gus has done for the sport. In fact no one has given away the prizes Gus has. He has even provided plane fare and accommodations for his geusts. Gus is a 900lb squatter and he may have bench pressed 600lb.
Gus is without a doubt a pioneer and ranks at the top of the list when you talk about promoters. 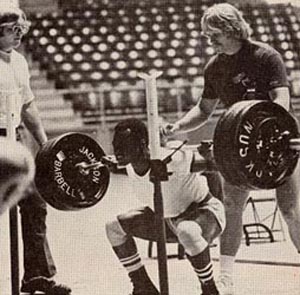 What can be said about the great Walter Thomas? He’s won four World Championships, and believe this or not, Walt’s wife, Julie, is the women’s world champion in her class. Walt has done lifts of 799lb/362kg in the squat; 518lb/234kg in the bench press and 821lb/372kg in the deadlift. There may be two other people that are in Walt’s class.

Ron collins is still alive. He is retired and currently living in south africa. He is known for his ‘strength longevity’. In the year 2000 he competed in a south african powerlifting meet and was able to deadlift 330kg and bet how old he was. Yes, he deadlifted 330kg at the age of 67. Hats off to Ron!

In the late 70s he was lifting in the 242lb or 275lb class. At that time ot too much was known about William Kazmaier, but as seasons come and go before it was announced, Kazmaier was on the scene. People were telling that Kazmaier would be challenging Big Jim Williams’s bench press mark. Bill was like a storm in powerlifting. He managed to squat 925lb and bench pressed 661lb. By the time had broken Don Reinhoudt’s total record. Bill was a giant at 6’2″, 340lb!

One of the first black men to establish himself and a world record holder in powerlifting. In Scranton, Pennsylvania, Williams started running the first big power meets in that area. Jim was a devoted lifter in the Scranton Y.M.C.A. and it was there that Jim hit stardom by breaking Pat Casey’s record of 617lb benchpress. On that special night Jim did 628lb and broke that total record. He would than do World Records of 635lb – 650lb – 655lb – 661lb – 675lb. Unofficially Jim was the first man to not only attempt 700lb but to do also 705lb and 720lb in training. Jim has done more on the bench press than any other man alive today! He held the record longer than any other men too – a span of thirteen years. Yes, this how far ahaead he was. He squatted 860lb officially and over 900lb in the gym. Coming out of retirement, Jim deadlifted 860 plus. At 47 years old, he talked of bench pressing 770lb. He’s held the total record on several occasions. In the summer of 1987 in Philadelphia, Jim was given an 80lb gypson sculpture for what he has done in powerlifting. If there was a Superman on the bench, it had to be Jim Williams!
Full article about Jim: Big Jim Williams From Prisoner To World Champion