A Brief Comparison Of Arnold Schwarzenegger and his son, Joseph Baena 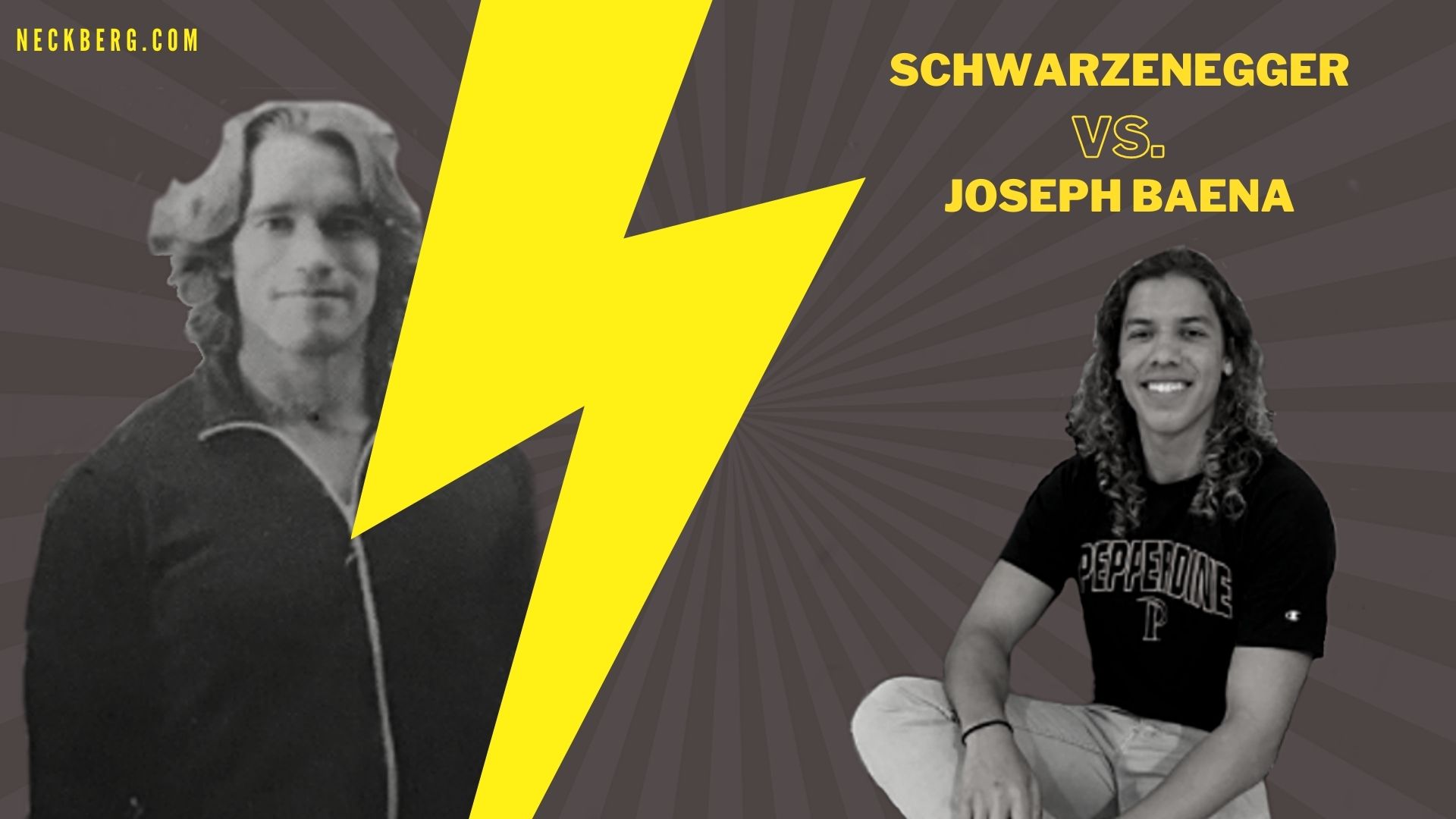 It is quite interesting how similar their faces are, you can not neglect the fact that Joseph inherited Arnold’s genetics, especially for the pursuit of bodybuilding. Joseph has been training for several years, and on Instagram he uploaded his first workout on 23. SEPTEMBER 2018 and since then has made some  huge progress.

There is a popular video comparing Arnold with his son Joseph uploaded by Nick’s Strength. I agree with Nick and would love to quote him.

Nick: “He’s training outdoors like his father used to with Franco Columbo. You can see Arnold’s legendary genetics for chest development shining through in his son!”

In this article I want to go deeper into the comparison, and present you some facts you maybe didn’t know.  Further I want to inform you how Joseph achieved that Natural Golden Era look!

Deep Love For Their Mothers

Both share a deep relation to their mothers. Joseph Baena uploaded a picture cooking with his mom and wrote on:

“I LOVE MY MAMA! Happy Mother’s Day to all the mothers out there. Thank you for always being our best friends, our protectors and our teachers! You all deserve the best on this special day and every day.”

Schwarzenegger loves his mother Aurelia too. He loved eating the famous Aurelia’s apple strudel. I am currently reading the German book “Arnold Hautnah” (engl. Close To Arnold), it was published by a long-time friend of Arnold. He wrote: “The only time I saw Arnold crying, was at the funeral of his mother.”

Mr. Schwarzenegger helped bodybuilding become quite popular world wide. So of course, Joseph Baena was born into the right atmosphere and he’s training at the well-equipped Gold’s Gym, Venice. Further he has access to high quality nutrition and most important,  knowledge from the Internet.

So in what kind of era was Schwarzenegger born?

Arnold was born on July 30, 1947, in Austria, Europe. Back in the day, bodybuilding was not accepted by the Austrian society. Strongman and weightlifting were the true sports of manhood.

How can I envision that era?

In 19th century Europe, especially in beerhalls, men gathered to lift weights and test their strength. You would not see mirrors or training machines.  Only  men with Bear- Type physiques with a barbell! Everybody would cheer each other and enjoy drinking beer. You see training for strength was popular and accepted by the society. Otherwise bodybuilding was deemed to be homosexual in nature.

Arnold was born in Graz, Austria and would enter a strength club aka a weightlifting club at the age of 13/14. An old training partner named Kainrath published a German book entitled GOLDSCHOOL BODYBUILDING.  He also uploaded videos on Youtube, a real treasure for history enthusiasts!

According to Karl Kainrath, the club was equipped very primitive. They trained only with self-made dumbbells and with a original Olympic weightlifting barbell.

Benches were self-made too. For each muscle, they would do 12 – 14 sets and after each set they would increase their weights.Nobody at the club was self-centered, everybody helped each other and motivated one another with cheering. As you can imagine, with that training mentality and environment,  Arnold and his mates were quite strong.

Joseph Baena uploaded a video on Instagram, in which he is deadlifting 180kg/396lb for 4 reps.  A young Schwarzenegger would outlift Joseph easily. Of course Joseph Baena was born into position where he had of a lot “opportunities” and he chose bodybuilding, which today is quite accepted by society.

It’s understandable that he’s not quite strong. Further he has not been training for as long on the deadlift, so he is quite strong in nature!

It is still impressive that the Golden Era Look is shining through Joseph’s physique. How can I achieve that look?Arnold Schwarzenegger is doing a great job, in introducing Joseph to great oldtime exercises!

Above you see Mr. Schwarzenegger introducing Joseph to the exercise pullover machine. It was invented by Arthur Jones and basically all bodybuilders during the 70s used this exercise. It’s a great exercise to build your latissimus and to build a huge rib-box. Of course not all gyms offer  this kind of equipment. You can basically take a dumbbell and perform this movement on a bench. As you might remember, Karl Kainrath stated that they used pullovers back in the day.

Furthermore, all 70s superstars, including Schwarzenegger, would combine pullovers with breathing squats for maximal testosterone release.

Every greenhorne would know, that the squat is the king of mass building. Unbelievable how the biomechanics are quite similar to Arnold. But how did Arnold train the squat? Luckily, I have access to Arnold’s rare old booklet entitled “Arnold: Building the legs of an oak”.

“FULL SQUAT – just because an exercise is old doesn’t mean that it’s bad. Put your heels on a block for balance and the bar on the shoulders. I then take a deep breath and squat below parallel. As I come up from the squat position I exhale. This aids in the expansion of the chest. I do six sets of eight reps.”

What is Joseph missing for achieving more muscle size?

One of the most beautiful tools to achieve more is training with a partner! Mr. Schwarzenegger had an Italian training buddy named Franco Columbo. They pushed each other onto a new level. Frank Zane, the winner of three Mr. Olympia titles and a High-School teacher, witnessed the intensity of both Arnold and Franco training together.

In an article of Iron Man (1972), Frank Zane wrote: “Arnold trained that summer – so hard that he and Franco Columbo had to employ an oxygen mask between sets of squats during the hot August evenings.”

Note: Thanks to Paul Leonard for proof reading

1 thought on “A Brief Comparison Of Arnold Schwarzenegger and his son, Joseph Baena”