A Day With Chris Dickerson

“Morning with Chris Dickerson comes early. It must, for when 8:30 brings his job around, he must have shaved, showered, dressed, breakfasted AND trained. Since his workout lasts about 2 1/4 hours, Chris usually rises at 4:45. This leaves him time for the first of his four-a-day meals.

Breakfast consists of three four-minute eggs, water, a protein drink, and supplements. During the day his supplementation will include vitamin B & B complex, C, E, and a liver pill supplement. He will not drink milk, as he feels this bloats the tissues. 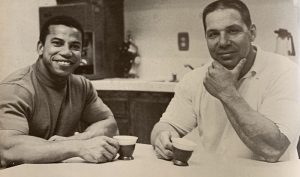 Following breakfast Chris heads over to the gym, where Bill Pearl will be waiting. Together they plot the day’s training, and then to work.

Chris moved out to California specifically to train with Bill, and feels there can be no better trainer or training partner. “Bill’s attitude toward training makes it easier to be motivated and work harder.” When they train, both of these fine athletes work toward symmetry, which Dickerson describes as “a cut-out comparison of upper and lower body divisions. The three most crucial areas are: shoulder, waist and calf development.”

Chris does not devote too much time to benchpress, as he thinks too many bodybuilders push this one exercise too hard and develop a top-heavy appearance.

Working on a varied schedule, Chris strives for all-around perfection, a goal too many bodybuilders ignore, being too wound up about big arms or pectorals or some such. He also works his legs quite hard, feeling this a too-often neglected area, and one that if well developed will set off the entire physique. He warms up quickly but thoroughly, unlike many physique men who spend little time on warmup and laze around for several minutes between sets. Both Chris and Bill treat training as serious business, but maintain a light-hearted attitude during it, cracking jokes occasionally. Thus, while striving for the Herculean ideal of total body development, they maintain a positive and unstressful attitude.

Following his workout and shower, Chris heads for work. Unable to get transferred from his job at NBC Studios at New York to the California branch right away, he is currently occupied as an employment consultant. His lunch at work consists of tuna fish and 6 1/2 ounces of protein supplement. Dinner is steak, liver or chops, green vegetables, cooked and leafy, water and another glass of the protein drink he had at breakfast.

His evening snack is sardines, the last of his protein drink and water.

Chris’ social life, like everything else in his life, is thoroughly enjoyed, but not allowed to interfere with his goals. Twice a week he socializes and is in bed by 9:00. He is actively studying voice and music and spends two evening a week studying with the renowned Mrs. Williams Eddy. He also practices an hour a day on voice lessons.

He is an ardent reader of non-fiction, and believes in improving the mind totally, as well as the body.

There have been black contenders for the Mr. America crown before. Harold Poole was a top competitor, as was Sergio Oliva.

But no black athlete has matched Dickerson’s qualifications: personable, intelligent, well-spoken and friendly, Chris is a champ in every department. “