A record lift streamed around the World by Hafthor Julius Bjornsson 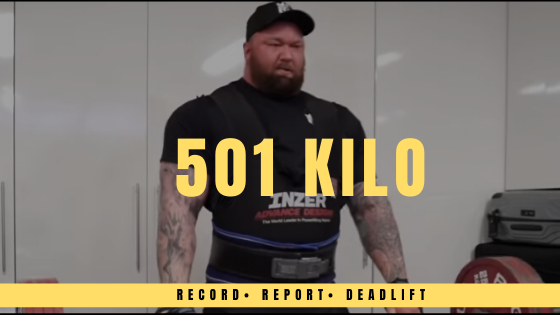 On May 2, 2020, Hafthor Julius Bjornsson, broke the all time strongman deadlift record by pulling 501 kilograms (1104.52lbs) at Thor’s Power Gym in Iceland. The event was sanctioned by the World Ultimate Strongman (WUS)Organization. The reason that the event was held was due to the fact that the WUS had a deadlift contest scheduled for Bahrain, but that show was canceled due to the current COVID pandemic.

The lift will certainly go down as the most watched deadlift of all time, between live ESPN cable coverage as well as internet streaming views such as Rogue Fitness’s YouTube Channel which documented almost 2 million views within 10 hours of the event.

The final build up to the record attempt:

Social media played a significant part in the build up to the event, as Thor’s YouTube Channel released content of his last two workouts as well as a hype video, recapping Thor’s training and competition highlights for 2020. Many in the strength world with a social media presence weighed in on a Thor’s deadlift event, creating an environment of excitement and interest for this first of its kind online contest.

ESPN advertised Thor’s event in the week leading up to it, with reminders during Sportscenter as well as in their daily print news letter. The good news was that ESPN was promoting and covering the event, the bad news is that ESPN was covering the event. Mainstream attention for any strength sport is great, as long as it promotes the sport and does not damage the integrity of the sport or it’s participants. ESPN labeled the entire day as ESPN 8 aka the Ocho. After the decent coverage of Thor’s event, the remainder of the day’s programming included the world stone skipping championship, dodge juggling contests, as well as the World Cherry Pit spitting championship.

The announcers for the event were on site Icelandic Tomas Johansson and Professional Strongman Lawrence Shahlaei streamed in from the United Kingdom. Both did a great job, as did Thor’s nutritionist Stan Efferding and strength coach Sebastian Oreb. The judge for the event was four time Worlds Strongest Man Contest winner Magnus ver Magnusson. Unfortunately Magnusson did a terrible job explaining the rules of the deadlift, muttering about the difference between Powerlifting rules and strongman rules but not clearly explaining to such a diverse audience what the rules are for the correct performance of a deadlift.

Prior to the deadlift attempts, the Rogue plates and bar to be used were weighed for the world to see. This process was conducted before every attempt to document how much the bar weighed. The second and third weighings were just of the weight added to the existing 925 lb bar weight. Thor’s father Bjorn was the person who loaded and weighed each plate for the camera.

Thor began his deadlift attempts by vaporizing 425 kilograms or 925 lbs. According to Lawrence , Thor was held to a 15 minute rest period between attempts. His second attempt was 465 kilograms or 1025 lbs. Thor manhandled this weight, pulling it strongly without the bar slowing down. The stage was set for the attempt at 501 kilograms (1104.52lbs) to break Eddie Hall’s 500 kilograms record set in 2018. The broadcast coverage of the pre-attempt proceedings was well done capturing the donning of a soft belt, then an SBD lever belt over the soft belt, an adjustment of his deadlift suit straps, the addition of a shirt over his suit, some ammonia inhaled and finally some chalk crushed before Thor stepped on the platform. The pre-lift psyche up was awesome before the record attempt, with Stephan Solvi Peterson (WSM competitor) grabbing Thor’s ears and getting right in his face with lots of passion and Icelandic speech that appeared to inspire Thor.

Thor pulled 501 smoothly, with great focused effort. Unlike some strongman deadlifts, there was no hitch during the lift, with Thor pulling the deadlift barefoot and with wrist straps. ESPN had multiple cameras positioned to capture the effort, with great footage they replayed approximately 5 times during the remaining 10 minutes of the broadcast as well on ESPN’s flagship sports highlights program Sportscenter for the remainder of the weekend.

After Thor got the down signal from Magnus, he lowered the weight under control and then he exalted his performance with his hands up in celebration along with a roar of satisfaction. Thor was congratulated first by Stefan as he left the platform and then he embraced his wife Kelsey, giving her a kiss.

The aftermath of the record, calling out Eddie Hall:

Following the record deadlift, Thor was interviewed by the two commentators with his wife by his side. Thor exclaimed that he was standing tall and healthy following breaking the record. Thor said he could have lifted more weight, but what would be the point of that; he would save that greater pull for a future competition. At this point in the interview Thor announced that he had signed a seven figure contract with Coresports, the richest contract of his career. He continued by saying that Eddie Hall had been offered the same deal and that Eddie had been running his mouth for weeks. Thor said, I knocked out your record Eddie, now it is time to put your fists where your big mouth is. Now I am ready to knock you out in the ring. I am ready, are you ready. Lawrence tried to get an answer to his question to Thor, whether he was challenging Eddie to meet him I’m a boxing match. ESPN cut from the broadcast and began showing a 2006 arm wrestling tournament.

Eddie’s Instagram for May 2nd had a picture of himself and Thor hugging, with a well wish for Thor prior to his deadlift event. The next posting by Eddie said he will sign the paper 1000 percent to knock Thor the fuck out because he has never gotten over Thor calling Eddie a cheat after the 2017 WSM Contest that Eddie won. Eddie went on to say his conflict with Thor was not over his deadlift record being broken, it was due to Thor never apologizing for calling Eddie a cheat. Eddie vowed to out train, out diet, out recover and to rip Thor’s head off in the ring, regardless of whether Thor is a giant with a reach advantage.