A Tribute to Luke Iams

“John L. (“Luke”) Iams, 55, of New Martinsville, WV, died April 10, 2004 in Wetzel County Hospital. He was born February 05, 1949. He was a graduate of Fairmont State College and the Pittsburgh School of Mortuary Science.

He was a powerlifter, and the owner of Luke’s Gym. In view of his passing, the memories I have of Luke are many. Mike Lambert has allowed me to share a few.

In October of 1975, I met Luke Iams while lifting at a bench press contest at the Parkersburg YMCA. As AAU Weightlifting, Powerlifting, and Physique Chairman for West Virginia, I introduced myself to Luke and asked him “point blank” if he would hold the WV State Championship beginning in 1976?

Without hesitation, Luke agreed to conduct the event at the earliest possible date.

Beginning in 1977, Luke served as WV Powerlifting Chairman until April, 1982. During the 1970s, long distance telephone calls were not cheap. Luke would often call me in the evenings and discuss Powerlifting meets, plans, etc.. sometimes for hours! Rather than 28 years ago, it seems as though it has only been 28 years. 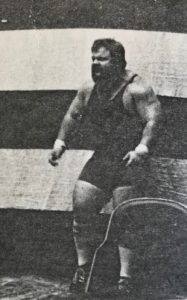 Luke performed squats in competition very deep and with good acceleration. The Iams method of “psyching up” prior to attempts was so popular the CBS Sports Spectacular aired his lifting from the Auburn, Alabama World Series of Powerlifting during the Summer of 1980, several months after the actual event.

Had Luke been blessed with the ability to pull Deadlifts in proportion to his outstanding Squat and Bench Press, he probably would have won the IPF Worlds. To this date, Luke remains the first and only West Virginian to officially Bench Press 600 without the use of a Bench Press shirt. 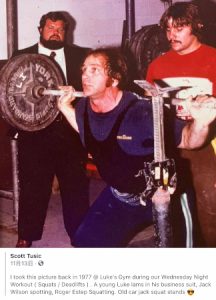 From 1976 to 1981, Luke Iams hosted some of the most memorable Powerlifting competitions that I have been associated with. Each year, the audiences present for the Powerlifting, held in the Magnolia High School Gymnasium, were enthusiastic and very large in number because of the achievements and promotional efforts of Luke Iams and the local lifters from LUKE’S GYM. For all of those associated with Powerlifting, especially in WV, the memory of Luke Iams will live on.

1 thought on “A Tribute to Luke Iams”