A Tribute To Ray Rigby 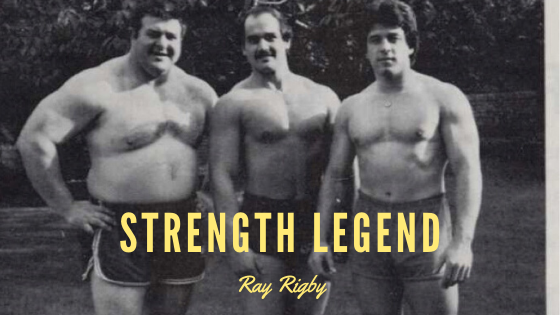 Ray Rigby was a weightlifting and powerlifting legend from the 80s. Ken Leistner was very close to him and the following article was written by him (1998, Pl USA)! – Mr. Berg

“I am very saddened to write that Ray Rigby has passed away. Ray was known widely in both powerlifting and track and field circles and was respected by everyone. He was such a genuinely good person and had such a strong influence upon the sport of powerlifting that I felt it appropriate to make comment. 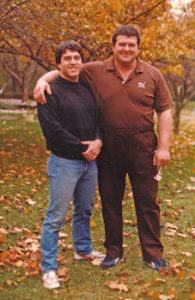 They could have benefited from knowing Ray and learning from him. Although Ray and I did not meet until the 1982 World Championships in Munich, it seemed to us, and almost everyone who saw us interact, that we had been friends for decades.

Indeed, it seemed that way. Ray was having a horrid time at the Worlds as was I for both physical and emotional reasons. He could have been a poster boy for perseverance. Ray was very much seen in his native Australia the way we in the United States view one of our more popular professional athletes.

As one member of the Australian National team told me, “Ray is looked upon sort of the way Kareem Abdul-Jabbar is seen in the U.S.”

His adolescent accomplishments were legendary. While still a teenager, he competed at the national level in both the field events and the high hurdles. He was national shotput champion, Pan Asian heavyweight wrestling champion, and then made the 1968 Olympic team as the Superheavyweight on the Australian weightlifting team.

He had a huge press and clean and jerk and a very good snatch. While his Olmypic lifts continued to rise, he remained as the premier shot putter in Australia. Overall, he made three Australian Olympic teams and won a gold medal in the Commonwealth Games as a shot-putter.

Ray, unfortunately, had a number of physical setbacks, but here is where all of us can benefit from his perspective on never giving up.

A severe auto accident almost killed him and a piece of glass severed a nerve in his eye. A very difficult course of recovery was set upon and despite numerous broken bones and damaged internal organs, he began his comeback.

Disaster struck again when the doctors surmised that a blood clot had broken loose and caused what they diagnosed as a stroke, most likely the result of a post surgical incident.

Again, he battled back from debilitation and the admonition from his doctors that he would never lift “anything heavier than a bag of groceries” ever again.

Defeat was not a part of Ray’s daily mental or verbal vocabulary. He was extremely close to his parents.

Ray and my wife Kathy were close in part because they shared a similar heritage. Kathy is part Irish and part Lebanese. Ray was also part Lebanese and joked long and loud that all Lebanese children, but especially the boys, were doted upon by their parents.

Ray was the perpetual “mama’s boy” in the most positive way possible. Until his death, he was in almost daily contact with his mother, and during his lifetime, with his dad.

When they next went into the nursing home field, Ray, as a registered nurse, licensed acupuncturist and nutritionist, led the way and it became the largest privately owned nursing home in Australia.

When they sold it to the government, Ray could have retired but as he told me,

“I want to make sure that no matter what, not only Carolyn and the children are taken care of, but it is vital that my parents have everything they want or will ever need”.

He raced and raised greyhounds and, of course, was very successful. He and Carolyn got into Amway distributing and made a million dollar or more their first year at it.

When I commented that it was “typical, you don’t need more money, but you – of course – hit it big” he encountered with, “I have to make sure my parents and family are looked after”. His heart was always for them.

Ray continued to not only succeed in business, but in his attempts to beat his physical ailments. He returned to lifting, but as he was unable to do the Olympic lifts due to knee surgery, a severe low back problem stemming from the auto accident, and then the discovery that he had adult onset diabetes, he became a powerlifter.

I was fortunate to direct his training for a number of years and he was a perfect athlete for any coach. He did exactly as he was told to do without adding a set or rep to the program. He placed third in three world championships, all under the hardship of severe physical limitation and injury, yet never complained, never alibi-ed, and continued to look for ways to help the sport.

He had a powerlifting newsletter. He served in a number of administrative posts for the Australian powerlifting governing body. 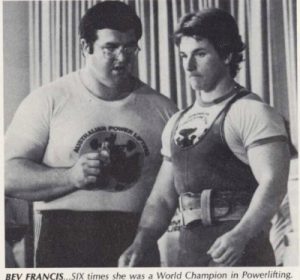 He was the coach of the women’s international team. In that capacity, he earned worldwide fame, or was it infamy, when he was handling all time champion Bev Francis and smacked her across the face prior to a big lift. He dislocated her jaw, yet got her to focus and get through all of her lifts, ending in another world title.

As he said, “I got a little carried away, but Bev was great about it. She was always a real champion.”

In the past few years, Ray was focused upon his children and their activities. All of his boys are high level or national level performers in various sporting activities.

I remember well, entering Ray’s room which was attached to mine at the 1984 World Championships in Austin, Texas, and being greeted with these maniac kids bouncing not only from one bed to the other, but from the bed to the dresser and back. The entire time they were shouting, in unison and in response to Ray’s query,

“Who’s the strongest man in the world?” “Daddy!”

After fifty such choruses, I realized that they could have done this for a full day and suggested that we head down to the coffee shop to eat. He was one hundred percent dedicated to the kids. He told me that his worst part of the day was when they left the house for school. Living in a small town, he would walk to the school yard and watch them play at recess, and then bring them their lunch. He wanted nothing more than for them to grow up healthy and happy.

Ray leaves his wife Carolyn and his boys. His mom has been awaiting major heart surgery and this weighed upon Ray heavily in the past number of months.

Ray succumbed to complications related to his diabetic condition, dying in his sleep on August 1st. He was one of the good guys and someone who proved that you could suffer severe injury and with intelligence and fortitude, battle back and enjoy the sport he loved. He will be missed by those of us who knew him well.

1 thought on “A Tribute To Ray Rigby”