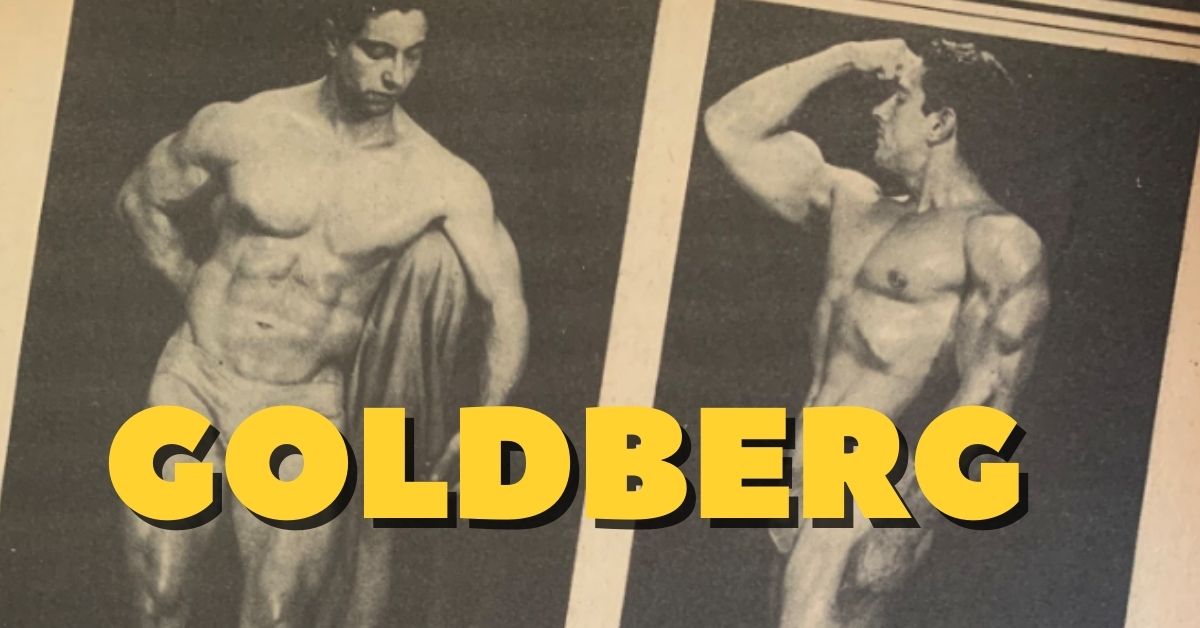 Abe Goldberg:”TO MOST OF US, dieting means eating less food to reduce weight or more food to gain weight. There are other aspects of healthful dieting, and to the bodybuilder – particularly the physique contestant – there is one diet that should make an immediate appeal; the super-high protein diet for muscular definition.

Oddly enough, little has been written about this – in fact, little is known about it even by leading nutritionists. Those who can tell us more about it are those physique stars who, by their own trial-and-error methods, have discovered a safe and effective way of achieving the “most” in muscularity.

Two of these stars are internationally-known for the highlighted delineation of their muscles. They are Jim Park, “Mr. America 1953” and Rico Tomas, “Mr. Universe, 1954”.

Rico’s diet is so simple, so easy-to-follow, that any interested bodybuilder can use it to good advantage.

His diet places emphasis on a very high protein intake with a very low fat content, and he stresses the proper timing of his carbohydrate (sugar) intake to give him the most energy for his concentrated exercising regimen. Before I discuss it in detail I shall list the diet in the exact sequence Rico himself follows.

Luncheon: 1 full pound of choice sirloin steak ground and broiled. 1 glass of skimmed milk. (rico eats so slowly and deliberately that it requires an entire hour to ingest this meal).

Dinner: Another full pound of steak ground and broiled as at lunch. 1 green and 1 yellow vegetable.

Before bed: Another milk shake made in the same manner as the one at breakfast. After each meal he takes a high-potency vitamin and mineral tablet. Note that the heaviest concentration of sugars and fats comes at breakfast. Rico waits an hour after breakfast before exercising.

By this time a complete combustion of the sugars and fats has taken place giving him huge reservoirs of power and energy. Exercise now become a thrilling experience as he lifts heavier and heavier poundages or performs higher and higher repetitions.

Now you will say that there is a great deal of protein in that breakfast, and you’re right….it’s there for a purpose. Rico knows that all night long, even while he slept, his body was working for him…his heart, lungs and other vital organs were breaking down and using protein every minute of every hour. Therefore, before he performs even the simplest chore upon arising he makes sure that all the protein his body has used is restored.

Were he to omit the protein from his diet at breakfast he would notice three things while working out. He would detect a feeling of edginess – his timing would be just a bit off – and a feeling of incompleteness, a sensation of being slightly tired would supervene.

It is in this hearty breakfast that most bodybuilders find the secret of exercising more efficiently. I remember that Barton Horvath once told me of having breakfast with another famous physique star, Gene Bohaty.

After eating this Gene would go through an extremely difficult and concentrated routine during which he would munch on apples, oranges and other fresh fruit. All to assure him of boundless energy!

To return to Rico’s diet, note that luncheon consists of nothing but a whole pound of ground beef and a glass of skimmed milk. This is to restore to the body all the protein that was used during his exercise period. He is simply rebuilding tissue and muscle at this feeding.

By dinner time Rico becomes aware of the need for a bit more energy…he may have spent the afternoon walking, playing a game or doing something that began to make demands on his “powerhouse.”

The simple addition of a green and yellow vegetable or a salad in this case is just “insurance.” He doesn’t want his body to be forced to use even one gram of protein for purposes of energy…that must come from the sugars or fats. He always bears in mind the fact that proteins are the buildings blocks of the body, while sugars and fats supply energy.

To make precious protein do the work of these other elements is to rob the body of what is rightfully its own. Sugars and fats are expendable…they were meant to be so. Proteins are not and they must not be so misused.

Rico may have an evening of leisure (he plays chess almost daily) perhaps he goes to a concert or sees a show. Whatever he does he realizes that the body still must have an evenly spaced protein intake. Hence, before bed, he whips up a high-protein drink so that his body can have nourishment for the night.

Here then is a day in the life of a superb athlete, a man who in his thirties possesses the magnificent physique, the sound health, and the knife-sharp definition of a boy in his teens.

Rico has recently opened his own gymnasium at 70 West 96th Street in New York City, and as I spoke to him about his odd but certainly effective diet, he pointed out some things that I believe are worth passing on to those who would have the greatest possible muscular definition.

“Abe, I believe in drastically curtailing my liquid intake when training and dieting for definition…the only liquid I have is the skimmed milk I drink…that averages five glasses a day. When the tissues become “waterlogged” through excessive liquid intake, definition is impossible.

“Then I would point out that bodybuilders, whether they are training for bulk, for maintenance or for definition, make a great mistake if they just depend on the good ol’ “three square meals” a day. WHY?

“Simple this…there is just so much protein the body will accept and use at any one time. Forced feeding…huge quantities of protein taken at one time will result in much of this precious supply passing off as waste. The body won’t tolerate it…can’t even use it. That’s why I take such a long time eating my meals. I take very small bites, I chew foods thoroughly, even exaggeratedly, and my body tells me it appreciates the courtesy.

“I never eat anything made of flour…even a small piece of cake has a bloating effect on the body – particularly when taken with liquid of any kind.

“Vegetables I eat for bulk ( we all need a little) as well as for their vitamin content and carbohydrate action. But a little goes a long way. Potatoes I wouldn’t touch, and I never eat anything that’s fried. I regard the skin as being the showcase that displays the body’s beauty…it should have a rich, tawny, glowing look about it, and this can’t be achieved or maintained if one eats starches of any kind.

“I think I’m even prouder of my skin than my muscles….I keep it like satin always and it tells the world more about the state of my internal health than any word I could contrive.

“Lastly, get enough sleep, and learn to lie down and just relax at frequent intervals during the day. Believe me, your body will thank you for your consideration.”

One of our most popular Mr. America’s, Jim Park, has an entirely different approach to dieting for muscular definition. I once spoke to Irvin Johnson, who trained Jim for the contest, about the diet he followed. Irv realized that Jim has a tendency to fat…he’s what we call an “easy gainer.”

Unless he stays on a constant high protein diet he “blubbers up.” The quantity of protein that Rico uses is probably less than half of what Park used. Park goes in for heavier and heavier weights and burns up energy at a marry clip plus the enormous demand on his protein supply.

To solve this problem and to make the ingestion of large quantities of meat unnecessary, Irv had Jim much handfuls of high protein concentrates, plus the addition of powdered high protein in meat loaves, stews, and the like. Many cooked dishes were liberally sparked with the protein powder, and this, plus the large intake of protein tablets, in addition to daily rations of choice roast beef, gave Jim the building blocks his body needed and the means of keeping fatty tissue at a minimum.

As Irv says, “Any fool can reduce his weight by starving, but we are greater fools when we follow so-called “scientific” diets that give full play to energy foods and give only lip service to protein. For reduction that comes merely from diminished food intake or from eating non-protein foods will only succeed in leaving the body flabby, without tone, flaccid, ropy, and loosely hanging. Protein is the only thing that makes muscle…..we are protein….let’s never forget it!”

Frequently obese persons, “easy gainers,” or those who just naturally tend toward overweight are swayed by the phrase “protein will reduce you” and they send off for a gigantic bottle of high protein tablets or powder.

But few of them really know which protein tablets to buy. They believe that just because the bottle is labeled “high protein” it will worked miracles for them. Imagine their surprise later to discover that far from losing weight they have actually gained! Here then is some food thought.

Some protein concentrates are made with a soy bean base and are impractical from the point of weight reduction. Why?

Because soy bean is extremely high in carbohydrate and fat as well as protein. In fact, the protein content, while high, is only slightly greater than the carbohydrate and fat content. Protein in such a case would assay perhaps not more than 40% of the total….the carbohydrate another 35%..the fat another 15%. These are the protein tablets that are excellent for those who wish to gain weight for they supply not only protein as building blocks, but sugars and fats in such abundance that rapid weight gaining is accelerated.

On the other hand, the protein tablets for weight reduction or for attaining the highest degree of muscular definition are those that have a base of milk (skimmed milk) plus fractions of liver and eggs.