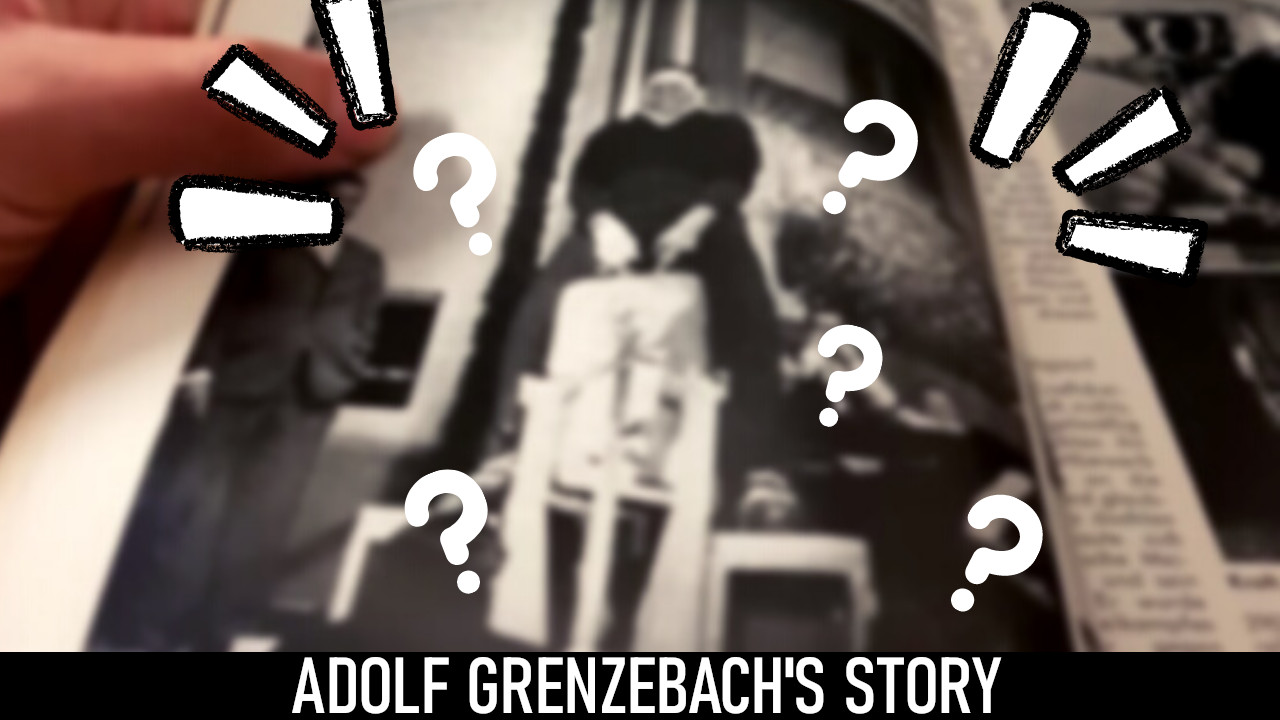 In 1968, Arnold Schwarzenegger deadlifted a record-breaking 310kg in Germany. I never cared about that record and never asked myself, ‘how long did the record last?’. One day, to escape boredom and motivate myself, I discovered a German magazine with a great story about the man who broke Arnold’s deadlift record.

The story was called, “Adolf  Grenzebach- Athlete and Farmer”. It was published in Sport Revue ISSUE 66, and was written by Albert Busek.

Busek describes Adolf as strong and the “king of stone lifting”. Stone lifting has a long history in Bavaria, where it is mainly performed in beer tents. Hans Steyrer (1849 in Allach ; † August 25, 1906 in Munich ), a butcher and innkeeper, is famous in Germany for possessing an incredible grip strength.

With the strength of his right middle finger alone, he could lift a 508-pound stone for a few seconds. Today, this feat of strength is still performed in Bavaria, with reconstructions of the original stone and its 508-pound weight.

Adolf admired the story and emulated it: he lifted the famous 508-pound stone at 11 different Bavarian competitions.

Adolf was from Hochstadt, near Starnberg and was already strong and powerful by the age of seventeen. In addition, he shared a farm with an area of 238,600 square meters with his father, which had to be maintained by physical labor. Field work, fresh air and fresh milk shaped his body and gave him great strength.

A weightlifting club looking for new members became aware of Adolf. He joined and then registered for the championship. By then, he could already press 170 pounds and snatch 120 pounds, without any special training.

In 1954, he began the famous feat of Bavarian “stone lifting” and was able to lift the heaviest stone 28cm from the ground.

The magazine “Sport Revue” was a pioneer in hosting and reporting powerlifting. There, in 1967, Adolf read about a power lifting championship in which Schwarzenegger and Columbo would participate. At that time, he was 38 years old and decided to attend the competition as a spectator. He saw real powerlifters for the first time and was amazed by the atmosphere. That was when he decided to become a powerlifter.

He converted his stables into a weight room, with a barbell and cast iron weights for exercises. By 1968, he was able to bench press 120kg, squat 230kg and deadlift 290kg, as recorded at the German Championships. He placed 4th behind Arnold, Schuhmann and Kopitz.

In 1970, he participated again and was able to improve his performance. He squatted 270kg, bench pressed 156kg and deadlifted a record of 317.5kg. As a result, Arnold held the German record for only two years: from 1968 to 1970. I could find no indication if Arnold ever attempted to beat his record.

Albert Busek witnessed the historical lift. He wrote: “He pulled with an irrepressible force on the bar, which was already bowing on the right and left. Adolf Grenzebach stood straight as a candle with this record load and laughed. Afterwards, he performed leaps of joy on the stage.”

Adolf worked on the farm and field from morning to night. He fed the animals and maintained the farm machinery. He supplied the villagers with fresh milk and eggs. In addition, he was on his own and had to do the bookkeeping. He didn’t finish his work until 7pm and only then could he devote himself to weight training. He built a lot of his equipment himself. He trained for two hours every night, and you can imagine how many calories he burned, so he was always very hungry.

Breakfast: Half a liter of milk, honey and bread, and four eggs

Lunch: His wife made, as he described it, “good home cooking.”

Drink: “farmer’s shake”, made of a mixture of half a liter of milk, four raw egg yolks and oatmeal.

Interestingly, after training he ate 1lb of oranges. Sometimes he also ate Bismarck herring. Throughout the day, he drank milk to satisfy his hunger.

After breaking the German deadlift record in 1970, he announced his retirement.

He said, “It’s hard for me, but I’m quitting powerlifting now. I owe it to my family. My four children have not had much from their father in the last year. I don’t want to put myself and my family through this again.”

But he never stopped practicing the tradition of Bavarian stone lifting. Up until his death, he lifted stones with passion!

In 2009, Adolf died, and his death came as a complete surprise. His friends said he looked a little bit unhealthy and “lost some color in his face”, but he never lost his strength. He even took part in a stone-lifting competition two months before his death.

The German website “merkur.de” wrote a short tribute to him. It said that even Arnold Schwarzenegger visited Adolf’s farm in the 60s and trained with him in his home gym, and furthermore has not forgotten him:

“At the funeral of Grenzebach, who has now passed away at the age of 75, the governor of California sent a final greeting in the form of a wreath to Hochstadt.”