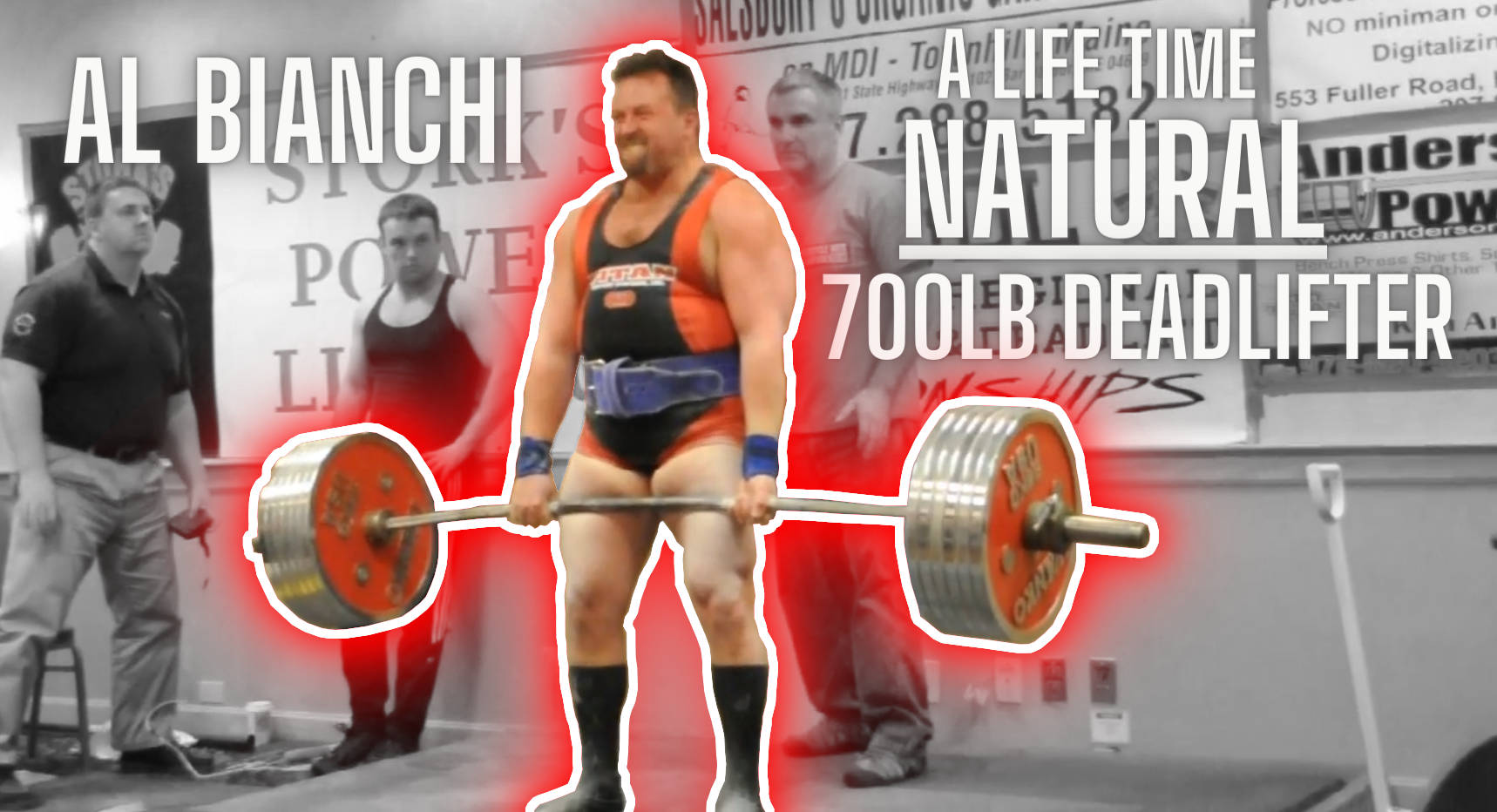 As anyone who reads my work knows, I am a proud native of Massachusetts. When I was doing local meets in the late 80s in New England, I became aware of a fellow competitor who was my age, a fierce platform warrior, and a super nice gentleman off the wood.  I left for California in 1991, and although I never did any more local meets in Massachusetts, I was able to follow Al Bianchi’s powerlifting career through Powerlifting USA magazine as well as on the Word Association of Benchers and Deadlifters Website.  I recently re-connected virtually with Al, who provided me with an update on how the last thirty years of his life has gone since we last shared a platform:

Please tell the readers your age, and occupation

I am 54 years old.  I am a personal trainer and a retired correctional officer (21 years in the state pen up in Massachusetts). I have been lifting weights for 41 straight years (started at 13). For me lifting was love at first sight.  I started immediately wanting to be strong and competing against every person in my little cellar gym.  But I entered my first on the books contest at age 15 and I’m still competing to this day and hopefully for many more days to come. The most I have ever lifted would be 715 squat (600 raw no knee sleeves ) 445 bench  (420 raw in a comp) and 745 dead lift. As far as strong man shows I only did one competition.  But I had trained a bunch of strength athletes who did well at it.

Have you ever done any other type of lifting events such as strict curl, Olympic lifting, bear wrestling, or dwarf tossing?

My max log was 265 ( wanted 300 bad …but I couldn’t make it happen).  I have competed a bunch at strict curls and I have had a lot of fun doing so.  158 at 220 and 161 in the 242 class was my best. Never tried Olympic lifting competition but I sure love watching them. Talk about precision and technical movements. Amazing.

Any best lifts in Strongman style of events or training?

As far as dwarf tossing …..almost. My best friend Mike Westerling (and best strength coach I have ever known) tried to talk me into going with him. There was a cash prize I sure could have used but I couldn’t bring myself to go.

What gyms do you currently train at?

I currently train at central Florida fitness.  A beautiful new chain gym that is far cry from the cellars I trained in of yesteryear.  My training partner who I met here in Florida is Chris’s Bradbury. I was able to talk him into competing in his first lifting contest after just a couple of weeks and we have been working on getting stronger ever since. Chriss is great guy and even invited me to his wedding last year.

Can you describe your current training system?

My training system his and has been the same for many decades.  Probably the most simple least complicated  (boring ) one out there.  I can explain it in two minutes. I train every exercise as an event  I don’t plan numbers other than wish for big ones. I warm up (lots of warms ups very light to start ) to one hard set of any given exercise and then move on to the next.  I don’t strain more than once. Always opposing muscle groups to help prevent over training and injury, I don’t train sore muscle groups. If I’m sore I’ll use muscles that are not sore or take the day off and dream of my next opportunity to make gains . That’s my whole system in a nut shell.

How would you train a 13 year old Al?

If I could talk to myself at 13…well I would certainly give this work out to young me and tell him also to enjoy the ride more. Because it goes by so quick   All those days in the gym making gains weekly. Oh man that is fantastic! If only I could still move forward like that at 54.

Any serious injuries you have overcome?

Ok now onto injuries.  Well I really haven’t had to many serious one but the biggest being a torn pectoral muscle at 23 years of age  That’s when I sure could have used my new work out plan of only one all out set.  Live and learn.  For rehab I just started back and went light high reps (one set, this is the event that turned me on to that idea.  I was able to get my bench back to almost as good as ever   Still pretty good today thankfully (I benched 315 for 7 this week ). But once you have an event like that it will never be 100 percent again   Other than that no major injuries  to speak of.

What is your diet like? Please describe a day of eating as well as a training week of eating.

Ok now let’s talk diet.  I got into this whole gym thing because of my obesity (at 13 I weighed 218).  I have been on a diet for 41 years and so far I have only gained about 8 pounds. But I’m a victim of circumstance (Joking).  But in all seriousness I have struggled with weight as far back as I can remember. The only time I was able to be at what I considered at a good weight for me was when I was young and could run like Forest Gump. Even though eating right is really a simple thing it is not one I have been able triumph over. My problem isn’t quality it is quantity. When completion time approaches though my plan is to eat more eggs than cool hand Luke and Gaston  (eggs in my opinion the perfect lifting food). And Honey and all other unprocessed foods God has provided for us.

What is a normal week like in taking care of your family, work, and training?

I live in Florida now. It’s a much slower pace since I have retired from Corrections.    I live in a nice gated community (much better than the one I used to work in, [Prison] those gates and walls where way higher and the inhabitants much less fun to be around). I train a client here and there get plenty of sun shine while think of ways to conquer the world.

I guess I’m in transition.  Transition into what …who knows. I’m thinking of going to back to college to finish my degree. If I don’t get a move on though I’ll be older then Rodney Dangerfield when I graduate.

Your state, Massachusetts , has a long tradition of strong motherfuckers and bad motherfuckers. Who are some of the baddest mofos you have trained with?

Some of the lifters I have trained with in Massachusetts. Well I’ll tell you the first introduction into the lifting world came at 13 when I walked into that little gym in down town Maynard [ “Peps gym”]. The best thing that had ever happened in my life up to that point. The man who owned it was quite a character. He had 5 sons to help him run his business. And they where all great guys and excellent athletes and lifters. Right out of the gate I knew I wanted to be just like them.  Not only did that help me reach some physical goals I never thought possible but it also helped me to my number one best thing that ever happened in my life,  I excepted Christ as my savior. 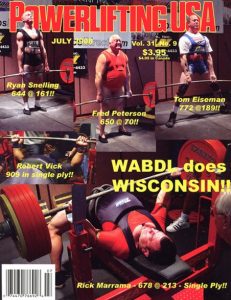 So from that little hole in the wall gym some pretty amazing lifters dwelt and emerged as champions. The list is long, but I’d say the best lifter was one I trained for many years Ricky Marrama. An all around great athlete and one of the best bench pressers ever. He was on the cover of Powerlifting USA (something  I always wanted but never achieved ).  He benched pressed 711 at 220 and 777 at 242 life time drug free in a single ply bench shirt. Not too shabby.  There are many others I have trained and work out with of high caliber elites. But Ricky was a stand out for certain.

What are you going to do to achieve your next goal?

My goals …hmm, To keep on being able to lift to the best of my ability and help inspire others to do the same. Because I believe it really enhances ones health and well being. What I do to recover from training sessions. Well not a lot other than rest sleep and eat quality food. I hit the pool and jacuzzi a time a three a week now, I love that.

Any hobbies of interest? What do you drive?

I love the UFC. When I was younger I dabbled in all kind of combat sports but nothing  like the UFC.  I love being next to the cage ….on the out side of course (I’m not that crazy or courageous).

What do I drive.  Hmm well a new Nissan  At the time of this post it’s a Nissan Kicks. But I get new ones fairly quick because my good friend Josh Keeven runs a the dealership.  He has informed me that I have the record for buying the most cars of him and that dealership as of  now. I am loyal to my friends and the only way I’d never not buy a Nissan is if Josh stopped selling them or started selling some other kind.

Tell the Strength World something that they do not know about you sir.

I guess I’ll say I’m a huge Elvis Presley fan and have him singing in my ear buds during my work outs. I’d like to thank Mike Westerling my best friend for giving me the idea and the confidence to train clients. I was doing  it for many years (for free), when he said your good at this why not devote more time help more people and make a living at it.

And with that Paul I thank you for taking an interest in me and for this interview.  And I think your question where right on the money (very good). Take care my friend and God bless.