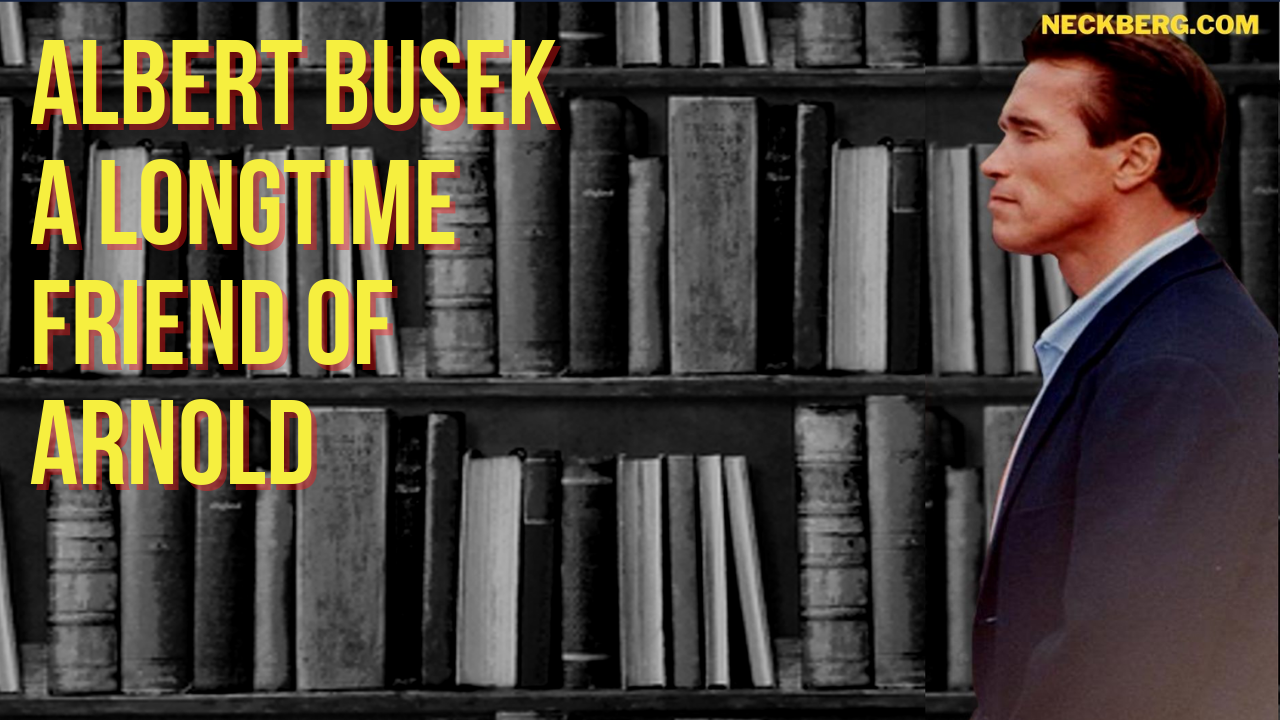 On Youtube, Albert Busek is called the “discoverer of Schwarzenegger”. In particular, the American bodybuilding journalist “Nick Miller” devoted himself to the topic Busek and published a 4-minute video about his career, which has been viewed 30,000 times.

“Joe Weider, the founder of the American Bodybuilding Championship IFBB, gets credit for discovering Schwarzenegger. (…) The man who recognized Arnold’s talent quite early is actually named Albert Busek!” – Nick Miller.

Albert Busek was born in Munich on October 11, 1943. He started strength training in the 50s, at the same time he enrolled in a technical university and started studying engineering.

The studies were financed by the state of Germany, so Albert was independent both financially and in terms of time. He tried his hand and discovered his passion for writing and photography. In addition, he and his wife had two twins and, to Busek’s dismay, his state funding was cut. Luck was nevertheless on his side, and soon after he would find employment. (1)

Rolf Putziger successfully positioned himself in the fitness market with his Munich-based magazine “Sport und Kraft”. In search of new writing talent, he came across the name Busek and offered him the job. From then on, Busek took over the research, documentation and photography of the German bodybuilding stars.

Franz Dischinger, Peter Sonnabend, and Reinhard Smolana were the German celebrities that graced the muscle magazines. Busek documented the competitions and along the way he was always on the lookout for new “bodybuilding talents”.

A short time later, Albert would find himself with his camera at the competition “Best Built Athlete in Stuttgart” in 1965. The best of the best competed there: Franz Dischinger, Helmut Fluck, Peter Wirth and Schwarzenegger.

Eighteen-year-old Schwarzenegger from Graz surprised the jury and brought home a superior victory with 263 points.

Busek took pictures, documented the competition and had a conversation with Schwarzenegger. Both Busek and Arnold pursued the goal of advancing the sport and out of this came an alliance of “give & take”.

Busek had built up a network in Germany, and was able to get him a job as a fitness trainer. In addition, he corresponded with the foreign decision makers (Joe Weider etc.) of the championships to guarantee a smooth competition-registration for Arnold.

In return, Schwarzenegger answered the letters of the readers of the magazine “Kraft Sport Revue”, sharing his training philosophy with the fans and his breakthrough as a movie star.

Schwarzenegger wrote: “As to the proper and correct execution of the triceps exercises, one can basically say: the upper arms usually remain quite still, there only the forearms move. If a barbell is used, the elbows must be kept as close together as possible. Between sets, one should not pause longer than 1 – 2 minutes.”

Over the decades, Busek documented Arnold’s physical developments and shared them with German readers. In particular, Schwarzenegger’s breakthrough with his action movies helped and guaranteed the magazine a long life-cycle.

Busek’s magazines had an exclusive market due to the exclusivity of the reports and photos and lasted successfully for decades on the market. Other bodybuilding magazines like “Sport & Fitness”, “Vita Sport” and “Athletik Sport Journal” only lasted a few years.

Even Arnold agrees that the old German bodybuilding magazines are of great value. He himself is a collector and a rather rare and expensive copy of the magazine ASJ Number 9 hangs in his home gym.

(By the way, I already published an article about Schwarzenegger’s favorite German magazine entitled Schwarzenegger – A Collector Of Magazines)

Albert Busek and the BSA Academy

Busek’s platform had a high reach and was successful in making its way into the bodybuilding market. In 1983, Busek would pursue the goal of “giving back to society.”

The BSA Academy was born and the first course was held in the “Busek Sportcenter” (1983). The highlight of this event was Schwarzenegger himself. 30 years later, Arnold would speak up again to congratulate Busek via video call.

Excerpt from the video message:

Schwarzenegger: “Thirty years ago, I met a group of young, curious people in the studio of my good friend Albert Busek. They were taking a training course. At that time, it didn’t exist at all. If you wanted to know something, you asked the person with the biggest biceps (…) That was always me (…) I liked the idea of training people properly (…) so that fitness training could meet with greater acceptance. What you developed since that time is gigantic. Today, your industry even has its own state-recognized university in Germany. That was unthinkable 30 years ago. That’s why I congratulate the BSA on these 30 years of terrific development: happy anniversary!” (3)

1 thought on “Albert Busek – A Longtime Friend of Arnold”