All You Need To Know About Calf Development 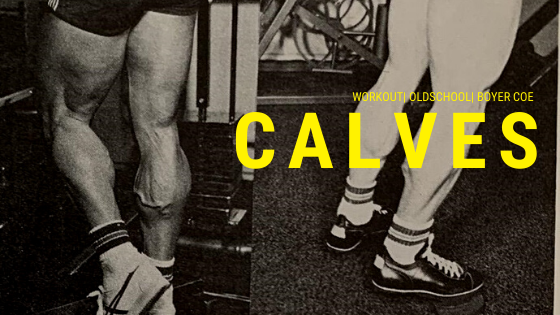 The following article was written by bodybuilding legend Boyer Coe around 1970 – Mr. Berg

“It is truly amazing, comparing the physiques of yesteryear with those of today. I can remember looking at photos of top physique stars when I was a kid, fellows like Steve Reeves, Jack Dillinger, Doug Strol, Sam Calhoun, Hugo La Bra, Clarence Ross and George Orlando.

These were the top men of the day, and at the time no one thought their development would ever be surpassed. However, if you compare them with the stars of today you will find that physiques today are more breath-taking and unbelievable. Arms are bigger, chests are deeper and the pecs are showing cuts that just didn’t seem possible before.

Backs are to a point where they defy description, abs are rock hard and some fellows have even developed them to point where they seem to have created a whole extra set. Thighs have more sweep and separation, the density is so great it leaves one to believe that you could actually put your hand in the deep grooves of separation.

And then we come to calves. You look at pictures of stars today and compare them with those of 20 years ago. And you look again because there has been very little change in this one area.

We seem to have progressed very little in the area of superior calves. Oh sure, these are a few who have developed outstanding calves, but when you compare this to the greater number of bodybuilders around today you can see that we have not been able to advance calf development as fast as other areas.

I really don’t feel that calves are any harder to develop than any other body part. Naturally, we all have parts that will respond faster than others, but development of the calves will come as quickly as any other body part if worked properly.

The biggest problem I see in developing calves is first understanding what to do.

Two years ago Chris Dickerson and I toured South Africa giving lectures and putting on exhibitions and promoting bodybuilding in general. There is certainly no question that Chris has great calves.

Invariably the question would be put to Chris: “What is your secret to outstanding calf development?” I say secret, for they truly believed that he must hold some closely guarded secret, otherwise they could develop calves like his.

However, in all honesty, Chris couldn’t tell them the secret, because there was none. He is one of the very few born with good calves. In the months we spent in Africa we trained daily and he never worked them once! If we could all be so blessed!

But then, I guess we would not appreciate it, since we had not made the great effort to attain the development. Naturally the limits of one’s calf development depends to a certain degree on heredity. In other words, where the muscle is attached. A fellow who has a very low attachment, where the calf gives the impression of running right down into the ankle, will have a much more impressive calf than one who has “high” calves.

However, each and everyone of us can develop his calves to his full potential and improve the development a tremendous degree simply by applying a few basic rules.

Before I get into the calf routine that has helped my development I would like to give you one little tip.

This tip is actually worth a kind’s ransom so consider yourself fortunate. I came across this nit of information from Rheo Blair, who was Irvin Johnson at the time, and might well be someone else by now. The secret is in the stretch. It seems that over the years all trainees have been interested in was how much weight they could lift while going up on their toes, figuring the more weight they could handle for more reps, the greater the calf development.

Now don’t get me wring, the contraction part of any exercise is very important, but so is the extension and in calf development it is paramount.

In training in different gyms around the country and overseas, the first thing I notice is that 99 per cent of all the blocks that are in front of the various calf machines are not high enough. In other words, they are just about useless.

When in South Africa I ended up having to build my own. Everyone couldn’t understand why I was such a stickler about this until they did a few sets with me. The next day they were all walking around as if they had just ridden 50 miles on a wild horse at a fast gallop.

You are simply missing half of the movement if the calf block is not high enough. By this I mean that you should not be able to let the heels touch in the down position even though you are doing calf raises with 400 pounds and feel like your arches are going to split in half. 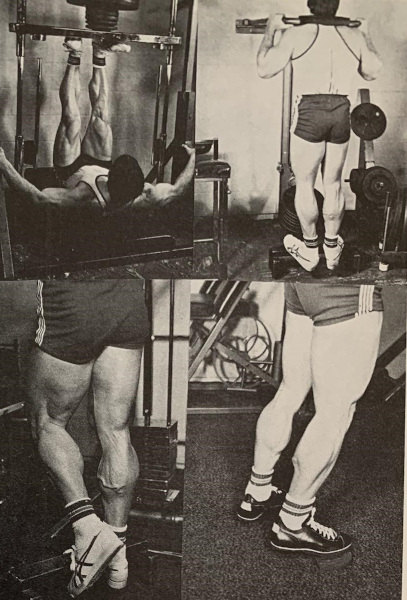 You can see what I mean if you check the photos that accompany this article; we had all the calf blocks special made.

I once asked a manufacturer of gym equipment in Houston why he didn’t make his sectorized calf machine with a higher block. He just sort of gave me a puzzled look and mumbled something about the block being the right size for the machine. It was clear to me that although his solid chrome plated, metal flake, upholstered calf machine was beautiful to look at, it was totally useless when it came to exercising the muscles properly.

Now for the routine that I am using at present. I train the calves four times a week. I like to super set calves like other body parts using as much weight as possible, making sure each rep that I go up as high as possible and stretch as much as possible in the down position.

After a few months of this you will be amazed not only at your improvement but also the great degree of flexibility in your ankles.

After a set of 10 reps on this we go directly to the standing calf raise where we do another 10 reps with as much weight as we can handle correctly. Usually we are forced to reduce the weight every other set. This is done until we have don 10 super-sets, any rest in between, it is one continuous set until we have completed all 20. Believe me, at the end you won’t have to wonder if your calves have had enough work.

The following day we will again superset the calves, but this time two different exercises. This is mainly to keep the enthusiasm up. One thing I have found in the years that I have been training is that you must constantly use a variety of exercises, not necessarily because it works the muscle better, but it keeps you from getting bored. Enthusiasm makes the difference in any undertaking.

The other two exercises are calf raises on a special leg machine we have, again super-setted with standing calf raises, but on a different machine. We do 10 super-sets using the heaviest weight possible with no rest until the full 20 sets are completed. I can’t impress on you enough the importance of getting a full, slow, complete movement, going all the way up and coming all the way down until you stretch the calf to its fullest.

Several months ago Pat Neve wrote to me asking if I could give him any advice on calf development. Anyone who know Pat surely must realize that he has a vast knowledge of bodybuilding or he wouldn’t be a top contender for the Mr. America this year. I didn’t think that I could offer any new twists to him, but I did mentioned the importance of the stretch.

Just a couple of weeks ago I received word from a mutual friend that Pat’s calves have improved and he credits the stretching.

I would like to mention another little gadget that will work wonders on the calves. I certainly can’t take credit for it, because it was the brainchild of Paul Cox of Jackson, Mississippi.

You will notice in one of the photos with this article, that I have on a pair of weird looking shoes. No, they are not left over from the Mardi Gras; we were fortunate enough to have some of the prototypes of Paul’s training shoes.

These shoes will soon be available to the public, as I think that one of the major athletic show companies will buy the right to produce them. Let me say this: if you did nothing but walk around in these all day your calves would grow. And this is a proven fact as they have been tested quite extensively for the past four years at the University of Mississippi.

Running in them is something else again. Red Lerille and I decided that we would run a half mile in them after each workout a couple of years ago.

We both were in hard training, yet we couldn’t walk right for two weeks because of the soreness in the calves. Obviously they are working muscles that hadn’t ever been worked that way before. I think I will get them out of the closet and have another got at it.”