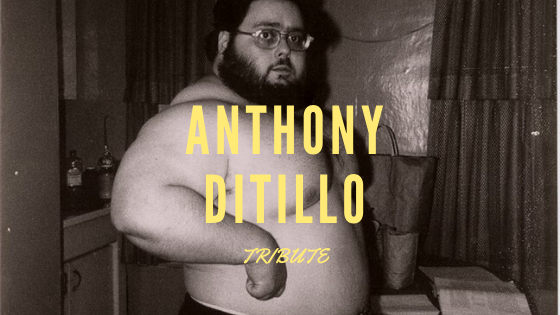 “For everyone that once knew and loved him, Anthony Charles Ditillo died on February 28, 2002 at the age of 54. He was a lifter of almost 40 years; never once even considering to stop his love of listing when being diagnosed with an enlarged heart at the age of 45. Also with this diagnostic, he suffered from his left side a ripped rear deltoid tendon and from his right side his triceps destroyed from nerve damage (both occurring from a standing press accident at around the same age of 45), and from chronic pain due to arthritis in his left ankle.

Even with all these serious ailments in is way from the age of 45 until the end of his life, he still managed to train 4 to 5 times a week and with an intensity that would put most people into their grave while being young and healthy!

But when he was younger, he was a sight for sore eyes for any serious strength athlete. At around the age of 26 and at a bodyweight of 330lb., he pressed over his head 405lb., pressed to the top of the eye while standing with 500lb. for five sets of three reps., did a seated press behind neck with the bar resting on a pin at his massive traps in the power rack with 350lb., and did a two finger in the knurling close grip bench press and a pause with 405lb. From the ages of 28 through 32 he decide to drop all his excessive bodyweight and went to a lean, muscular bodyweight of 205lb.

Even at this lighter bodyweight, however, he still manage to move some serious numbers. He benched with a medium grip and a pause with 405lb., pressed behind his neck standing with 255lb., did a standing press with 300lb., shrug pulled from the top of his knee in an Olympic style with 700lb., and squatted with 500lb., with only a tapered belt and down to a pin in a rack.

As you can tell, he believed in making his lift as strict as possible.

During all of these years he wrote for numerous lifting magazines, including Powerlifting USA in the early 80s with a monthly article entitled, “Tips From Tony D..” He also wrote two published books entitled, The Development of Muscular Bulk and Power and The Development of Physical Strength.

If there was any one key word to describe the life of Anthony Ditillo Sr., it would have to be without a doubt the word “strength”.

No matter what obstacle laid in his path, he always found a way to either climb it or get around it with all of his being. He believed and always told me, “The time is now!, to do what he wanted and to make of himself what he wanted to be. These are words that he passed on to me and I take with my soul everyday of my life. These words are also what I leave you, the readers of my father’s articles and books, as his last words of wisdom to his fellow lifters and to the sport itself that he loved so dear and was still apart of him, even the day before his death: “The time is now!”

Note:
This piece of lifting history was published in PL USA 2002 Dec, page 37