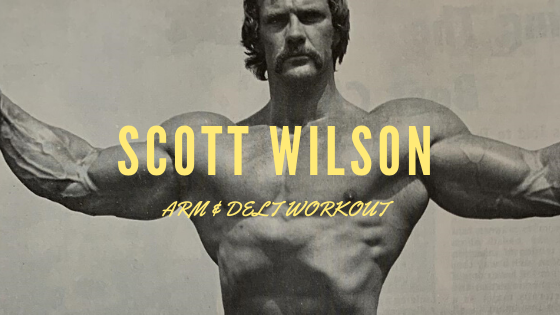 “Take a survey of bodybuilders as to what their favorite body part is and 99 per cent will says arms. Even though the arms are a relatively small and weak muscle group compared to the larger groups such as thighs, back and pectorals, they are the showpieces.

There’s no getting around it that arms are “In” and always will be. Even the average man on the street is impressed with a good pair of arms. When someone says make a muscle, we automatically flex an arm even though we have some 300 plus other muscles to choose from.

Personally, if I were to pick any muscle groups, that I would want to be overdeveloped, it would be arms and deltoids. Over-developed pectorales tend to look balloony and feminine and in some cases hang through sheer weight and in later years when some tend to slack on the workouts the pectorals tend to go rapidly. Overdeveloped thighs tend to have the same balloon effect.

However, how many men have you seen with overdeveloped delts or arms?

Good arms and deltoids look as impressive in street clothes as in pose brief.

It’s pretty much the law of diminishing returns. If a muscle is worked too much or too often it actually reduces in size. Also better progress is made on a well-rounded routine working all the body parts, rather than just specialization on a few.

Through specialization one can develop a pretty exceptional pair of arms without adding any muscle to the deltoids but by working hard on the deltoids one gets an added bonus of an impressive pair of arm. So the smart bodybuilder would be wise to combine deltoid and arm work when specializing.

Probably the prime example would be the great Larry Scott who specialized on deltoids and arms together two workouts per week.

There have been many greats in recent years with spectacular arm and deltoid development but Scott Wilson, the 1974 Mr. California can hold his own with the best of them.

Scott is relatively new to the physique game but he has taken it by storm and will be the name to watch for in the future. Take a look at his track record in only a year of competition in the hotbet of top physique competition, Southern California: 1973 Mr. San Diego as well as Most Muscular, Best Arms and Best Legs.

An interesting side note here is that Scott found out about the contest, which was the first he had ever seen, three weeks prior to the competition, therefore had no time to adequately prepare for it, yet was a standout winner, 1st place Mr. Southern California for ’74 plus Most Muscular and all the body parts as well as Best Poser, Mr. Pacific Southwest and Most Muscular and Mr. California for ’74, Most Muscular and Best Arms against the best sunny California had to offer including Dave Johns, Jr. Mr. USA., Dale Adrian ’73 Mr. Southern California and Ron Hutchinson, winner of many titles as well as recent Iron Man cover man.

Scott has never been beaten for a Best Arms award. Note that in the brief time Scott has been competing he has taken all firsts but one and that was the ’74 Mr. West Coast contest where he placed third, which was won by his workout partner, veteran physique star Ralph Kroger.

Another interesting and almost unbelievable note here is that Scott entered the Mr. West Coast contest after a three month layoff.

That’s right, he didn’t touch a weight 3 months prior to the competition and yet took 3rd place as well as the Best Arms award. This gives some small indication of the fabulous and lasting physique this man has.

I wonder how many other competitors would consider entering a contest immediately after a three month lay off? I’m sure there wouldn’t be too many takers.

One has to see Scott in the Most Muscular pose to appreciate the fabulous arms and deltoids this man has. I don’t think there are too many men around today who can look equally as impressive Scott in that particular pose.

Scott feels that the arms get a tremendous amount of work with every body part. 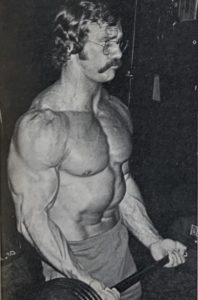 The triceps come into play during most pec and delt movements and the biceps during back work.Therefore, Scott feels it would be a mistake to do too many sets of arm work but to work hard on the movements selected and concentrate strongly on each and every repetition.

When Scott first began training at a bodyweight by the way of 100 pounds, he did only a few basic exercises; bench presses, squats, presses and curls and a few other movements thrown in for variety and trained heavy and fairly loose style.

Within four years of heavy training his bodyweight was up to 190 and the basic, heavy movements had paid off with his arms and deltoids being his most impressive body parts.

Now to put the finishing touches to his physique, he is training 6 days per week as previously mentioned, with his workout partner, Ralph Kroger.

Tuesday, Thursday and Saturday they work chest, back, legs and abs an on Monday, Wednesday and Friday they work shoulders, arms and abs.

Their routine varies from time to time and Scott feels a wide variety of exercises is necessary to put the finishing touches on deltoids and arms.

Following is the current delt and arm routine they are using and the one Scott is using in preparation for the ’75 Mr. America contest.

Every movement is done in a slow, strict style with a complete contraction and extensions of every movement. Just enough rest is taken for the workout partner to complete his set so the entire workout is done at a fast pace.

Scott emphasizes that this is not a workout for beginners and this it is a workout that has been especially beneficial for him and Ralph but may not be particularly suited for some others.”