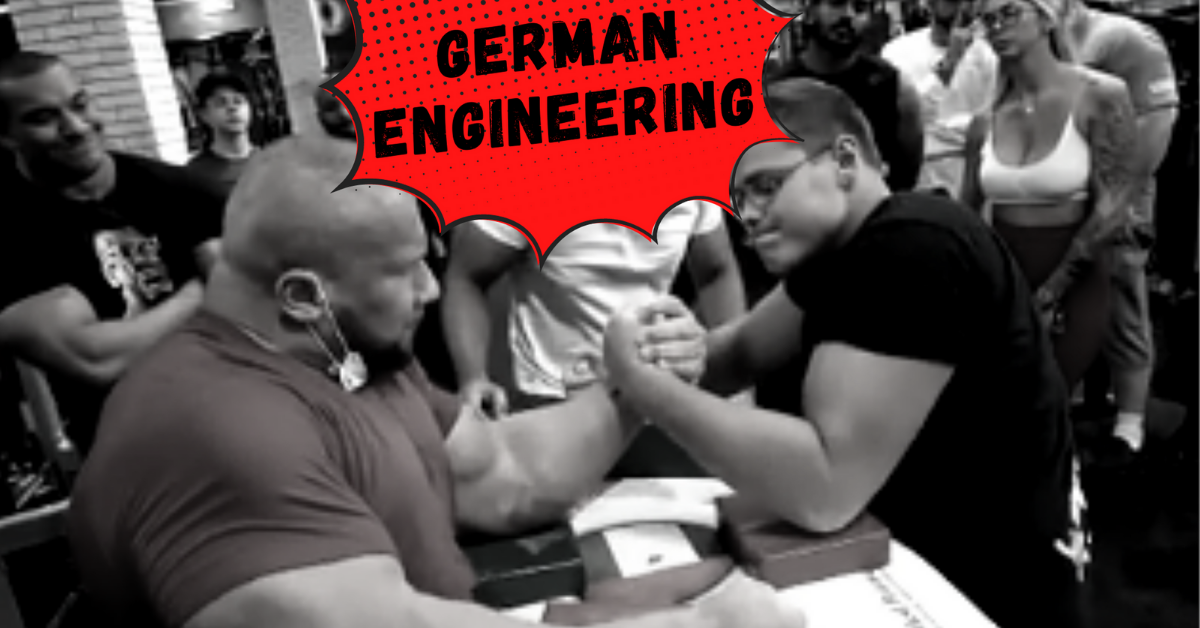 On November 2, 2020, the YouTube channel Arm Wrestling Tv uploaded a great arm wrestling match between ‘School Boy’ and Leonidas Arkona from Germany! The Youtube video went viral with over 2 Million clicks, and it’s just crazy that muscle size is meaningless in arm wrestling. Technique and tendon strength seem to be the success to victory! At Neckberg.com we treasure history and love to teach you some lessons. For a short fun fact: The most famous German speaking actor and bodybuilder, Arnold Schwarzenegger, loved arm wrestling too. He once tried to defeat Jimmy Payne, the lightweight arm wrestler.  It was the 70s, the Golden era, and Payne recalled the event very well. The young and muscular Schwarzenegger outweighed him by about 80 pounds, but still lost the match. So again, muscle size really does not help at arm wrestling.  When asked how he defeated him, Payne replied,

”I whipped his ass.”

Another fact: Most people are thinking that Leonidas is just a nickname. But he is of Greek ancestry and so that’s not a nick name, it’s his real citizen name!

Leonidas has always been hungry and is always searching for strong opponents. In the above video you see Leonidas calling out people for arm wrestling.  It’s Novemeber 2019, very cold and the match took place in Kudamm, Berlin. Leonidas exclaims for anybody who is able to beat him! To make a long story short, nobody beat him.

Leonidas is not only hungry for strong opponents, but also for knowledge! Here in Berlin, Germany we have an arm wrestling school! Leonidas is there quite often to learn and wrestle. And of course he is sharing his experiences on Youtube for free!

The above video obtained 300, 000 views and it is about Leonidas Arkona learning the right proper technique for Arm Wrestling! The arm wrestling school was established by a man named Rene, who has been doing arm wrestling for 8 years. Rene: “I am doing Arm Wrestling for 8 years, my buddy and me had the idea to create a concept just for arm wrestling.” The Youtube video starts with warming up for arm wrestling. At their training center they have got a warm up station. At first they’d do basic stuff like: deadlift, shoulder press or pulling exercises. Rene starts with an exercise called ‘capping.’ Rene: “It’s great for your long and short fingermuscles and palmar flexion of the wrist.” According to Rene, there are several grip positions. Basically you can do it thumbless too, but Arkonda prefers gripping it with his thumb. NEXT WARMING UP EXERCISE: RISING Hand, Wrist and forarm should be in a straight line. Don’t use heavy weights, it’s still warming up.  Rene’s upper body is bend forward, at arm wrestling your upper body would be bend too. 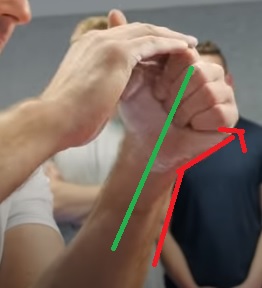 The above warm up exercise called RISING will help to stabilize your wrist during the match. 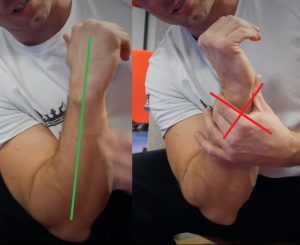 Don’t lose your technique and bend the wrist. It’s like boxing: You will generate greater power with a straight arm and wrist connection!

Only use your arm to pull the weights off the floor, your body should not do the movement. After pulling to the position in the left picture, move only a little bit of your wrist. Then repeat the movement.

Rene attached a green resistance band to the weights and said “Pronantion is one of the most important in arm wrestling and it feels very strange at first, because nobody is training for it.” Above you see Leonidas warming up and he’s pulling the weights not in a straight line, he’s pulling it to his left shoulder! 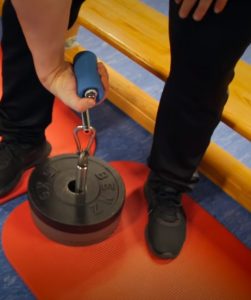 Rene: “Don’t overwhelm your finger at my thumb at the start, furthermore your wrist should be in a straight line with your forearm, but if the match starts you can bend (pronation) your wrist. “

Leonidas Arkona was concerned about the possibility of breaking his bones during an arm wrestling match and Rene said: “If you arm wrestle the wrong way… just pushing your arms without involving your upper body, then an injury can occur very fast. And further, arm wrestling is a Dynamic movement! Fast with jerky movements (without involving upper body movement) is just not great. During arm wrestling you can not switch from a static movement (not involving the upper body) to a dynamic movement (involving the upperbody). The momentum is huge and then you will break something.” Note: Thanks to Paul Leonard for proof reading Source: Jimmy Payne Arnold: starkcenter