WWC Hall of Famer Jim Pollock, of Palo Alto, California, was the first person to win five World’s Wristwrestling Championship titles. His dominance of the middleweight class was unprecedented. His reign went from 1967 to 1972. In this article you will read about Jim Pollock’s training methods!! – Mr. Berg

Jim Pollock’s arm wrestling workout
Every man has a story behind his success and Jim Pollock is no exception. In Jim’s case, the story evolves from the time his father playfully wrist wrestled with him at the age of 10.

That was 25 years ago, but nevertheless significant in forming Jim’s competitive spirit and his will to win. Wrist wrestling is not the only sport Jim’s vast storehouse. In his high school days he lettered in football, baseball, and basketball. Being selected all-conferance in all the three. Upon his graduation from Menlo High School in Menlo Park, California, enrolled at Stanford University. It was at Stanford that Jim really started to wrist wrestle in earnest.

Besides being an athlete, Jim also enjoys log chopping, water and snow skiing, and most enything that is physically and mentally stimulating. He feels very strongly about overall physical conditioning.

It’s role, he feels, is very important tohhe athlete, or anyone for that matter.

Moving back some, Jim graduated from Stanford in 1959 with a B.A in history. He later went on to form his own Life and Investment Insurance Company located in Palo Alto; james Pollock Inc., where $10,000,000 worth of insurance was written. Jim is married and the proud father of a boy and a girl. The Pollocks reside in Menlo Park. 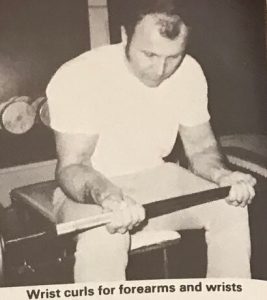 Now we come to the things that have played a major role in Jim’s success as a wrist wrestler; training, eating and living a balanced, healthful and sensible way.

Let’s take them one at a time. First, the training. Because of his very busy business schedule Jim trains at the Palo Alto Health Club twice per week; Tuesday’s and Thursday’s the workouts lasting between two to three hours.

First, Jim does four sets of 6-8 reps of dumbbell presses, deltoid pulley exercises, and chins behind neck, alternated with lat-pulls. Then comes various forms of arm wrestling for 30 minutes. For all you potential wrist wrestling champs, here’s the break down

This above routine starts in December and continues to about April, or right before the championships at Petaluma in May. Jim calls this routine a defensive/offensive, strength/endurance training program.

He believes in food supplementation and takes vitamins and minerals to assure himself of proper nourishment.

Jim is a firm believer in living a healthy life. He makes it a point to get eight hours of sleep a night. There’s one thing however, that Jim doesn’t believe in and refuses to even try; and that’s drugs. Jim claims, “I have never used drugs and I never will. I think I have a strong enough mind without using drugs. I go to an ‘awareness class’ to explore my mind.”

Wrist wrestling seems to run in the Pollock family. Besides Jim competing, brother Ted makes it to Petaluma too. Altough not as accomplished as his World Champion brother Jim, he always manages to make a strong showing. Ted has nothing but praise for his older brother. “Jim’s mind is so cool in competition that it’s hard to tell that his mind is on the subject at hand. But underneath he is more determined to win than any man I have ever met. I personally can’t see him losing to anyone. He’s too good, too fat!” admits brother Ted.

Jim himself said, “I owe more to the power of my mind than any other single factor. Of course the advantage of good tendons and ligaments help a lot, too”.