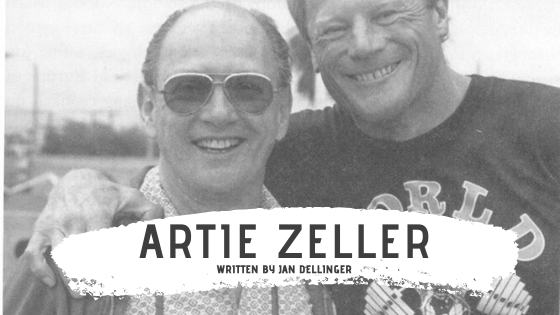 Back in the day of golden era bodybuilding Jan Dellinger worked for famous magazines like Muscular Development and Strength & Health. Furhermore he met and knew a huge bunch of oldtime bodybuilders. The following article about Artie Zeller was written by him for neckberg.com!

“Thanks to the fact that I had the only extra bed available in a Worcester, Massachusetts (USA) hotel on the eve prior to a WABBA World Championships, I was able to forge a working relationship with legendary physique photographer Art Zeller. Serge Nubret of WABBA had contracted with Art to shoot the contest for his organization, giving him a round trip plane ticket in advance, but failing to secure him a room. So, when Art arrived at the contest hotel after leaving his post office job and journeying from LA to Worcester, there were no rooms left to be had.

While staked out in the lobby and learning of his late-night dilemma, I approached Art with an offer of the available bed in my room, which was quite fortuitous for me as well. Previously, I had attempted to contact Art about shooting pics for Muscular Development after John Grimek retired, but he never responded. Well, I had his full attention after solving his lodging problems.  Art proved quite the conversationalist, having endless anecdotes and stories about his associations with everyone from Arnold to Eder to Weider and beyond. 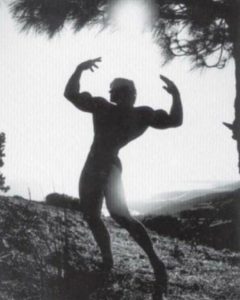 Art’s magical talents utilizing available natural lighting had captured the physical charisma and greatness of an A-list of muscle greats over the decades. Since mentioning  the “A” list,  let’s start with Arnold, who Art did have a close friendship with beyond bodybuilding. In fact, when Arnold’s mother came to visit him in California, and Arnold was busy with movies and other projects, Art would often be invited to the Schwarzenegger palatial estate to entertain Mother Schwarzenegger as he could speak German, whereas that was her only language. Plus, they would have been a little closer in age. Art also acknowledged that his big-bodied friend could occasionally become peevish on a lengthy photo shoot, or when he was gearing up for a contest.

While rightfully renowned as an impeccable physique photographer whether indoors or out, few are aware that Art was a fairly accomplished bodybuilder himself initially. In fact, Art was the coverman on the January, 1955 issue of Joe Weider’s Muscle Builder magazine. Around this same time, Art linked up with an unbelievable muscle star from that era, Marvin Eder. Of course, the two of them became regular training partners. Commenting on the other-worldly physicality of Eder, Art remarked, “I thought I was getting pretty good when I could knock out 10 sets of 10 reps in the chin with 100 pounds hanging on me. But we had this little agreement between us…he would double anything that I could do. Well, I didn’t think even he could do 10 sets of 10 chins with 200 pounds attached to himself. But he did it!”

I gathered that Art was raised in a very working class Jewish enclave within New York City.  While describing the neighborhood he grew up in, he contrasted the diversity within his ethnic surroundings, making particular mention of his Orthodox brethren, who stayed exclusively to themselves and shunning the outside world. Art’s broad point was that within their very confined sub-set of the Jewish culture, there resided exceptionally accomplished artists, musicians, educators, great minds, you name it, that the mainstream culture would never hear of. Even brought this contention down to include weightlifters. According to Art, among the aloof Orthodox Jews of his area were smaller men who could clean and jerk 275-300 pounds on standard (non-Olympic) exercise sets with non-revolving bars…when the IWF world records in the smaller weight classes were only 30-40 pounds more than that!

This brings me to the last named in the second paragraph, Joe Weider. Bear in mind that I was initiating my friendship/working relationship with Art in the mid-1980s, where as Art and Joe went back a lot longer. At least to the 1950s. Art detailed his ups and downs with Joe Weider over the decades, which from what I’ve gathered from a number of people in the muscle game is the only kind of relationship one could really have with Joe. Suffice it to say that Art found him very difficult to deal with…to the point that the former had established “ground rules” under which he would do contractual work for Joe. If Joe didn’t follow them in writing, Art would not apply his talents on Joe’s behalf.

One of the situations which prompted Art to put his foot down with Joe was that if a shot taken by Art was used for the Weider mag cover, he would get paid only once for its usage. Fine as far as it went, but what Joe would turn around and do was lend the same shot to his various satellite subsidiary magazines around the globe. They would, in turn, also put it on the cover of their magazines….free of charge. Art believed, and rightfully so, he should have been remunerated with each successive usage.

As editor of Muscular Development magazine, I had a wonderful working relationship/friendship with Art. Even got him to conduct effective interviews with his camera subjects he photographed for us. Art ably stepped from role to role within the bodybuilding scene. I think it even surprised him to a degree. One of the things I lamented the most when York Barbell sold Muscular Development magazine was losing touch with Art.

Even though he passed in 1999, the bodybuilding community still has his iconic gym training photos of Arnold, Franco, Zane, Draper, etc. as they bombed and blitzed in the original Gold’s Gym to remember him (and them) by.”