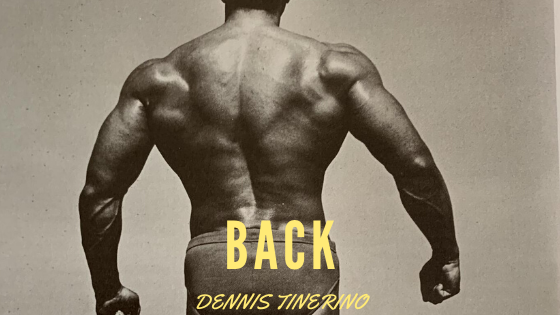 “When a bodybuilder decides that his back development is under par in certain areas – namely the trapezius, latissimus dorsi and spinal erector muscles – a back specialization program should improve these areas.

I have found that a great majority of bodybuilders tend to neglect the above mentioned areas. One reason for this is that the muscles of the back are not as visible as the other showy muscles of the body.

Since the latissimus dorsi muscle, when fully developed, can be seen as readily from a front view as from the back, more time is spent on developing this region than is spent on the trapezius and spinal erector muscles. The latissimus dorsi area is very important to back shape and also the overall taper of the upper body. But one must realize that the lats comprise only a portion of the back. The remaining portions of the back play just as great a role in the overall taper, muscularity and thickness. If one wishes to obtain a truly impressive looking back with a great amount of mass, he must develop the rhomboids, infrapsinatus, trapezius and the teres groups.

Before I go into the back exercises, I would like to relate a few personal experiences concerning my own back development. In my case I have always had to go all out in training my back to obtain results.

I was always aware that my back was one of my weaker points which had to be developed to its fullest. This has taken a great amount of concentration and various training routines.

For example, I can remember the time Joe Abbenda, Mr America 1962, and I would do sets of heavy barbell rows until one of us would say “uncle”.

We did forty sets of barbell rows in one workout using 300 pounds. If you think this is an easy training program try it some times, and I am sure you’ll say “uncle” pretty quickly. I relate this little experience so you can get an idea of the work involved in developing a powerful, well shaped back. As my good friend Joe once said, “You can’t take the easy street in training your back if you truly want it to be outstanding.”

As I have already stated, I have tried varied back training routines, from weight lifting, deadlifting movements, to high bar chins. Weightlifters have the most rugged and powerfully developed backs of all athletes.

This is due to the various lifting movements which really bring the back muscles into play. I feel that weightlifting has helped my back development a great deal. I will list 3 exercises for each muscle group that I have found to affect that area the most. 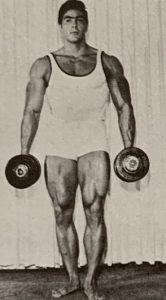 Shoulder Shrug – This is probably the most effective movement for developing the trapezius muscle. Holding the barbell to knee height in an erect position, slowly shrug or pull your shoulders up as high as possible in a circular motion.

Dumbbell Shrugs – Movements are done exactly as above, but dumbbells allow more freedom.

Upright Rowing Motion – Holding the bar with hands almost touching, pull the barbell up toward the neck in a concentrated movement. 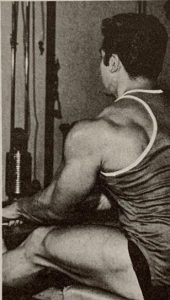 Barbell Rows – This exercise is probably the most well known exercise for developing the back and the lats in particular. Bend forward at the waist and grasp a barbell with two hands. Pull the barbell in an upward motion to the stomach. Lower the weights slowly, allowing the lats to stretch out fully.

Pulley Rows– Here is another terrific movement for the entire latissimus group. While seated on the floor with the body in a firmly braced position, grasp the handle of the pulley until your hands touch the stomach. Tense the upper back muscles before allowing the pulley to return to starting position with the arms not quite looked out. Pulling the weight in toward the waist effects the lats a great deal more.

Lat Machine Pulldowns– Grasp the pulley with both hands and pull down behind the neck as far down as comfortable. This exercise will also effect other muscles of the back as well as the shoulders. 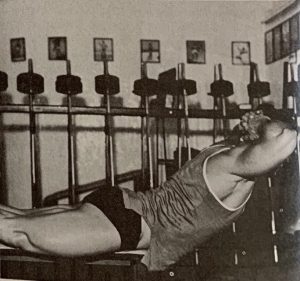 Hyperextensions Movement – Lying over a bench, lower the body as far as possible and slowly return to starting position. 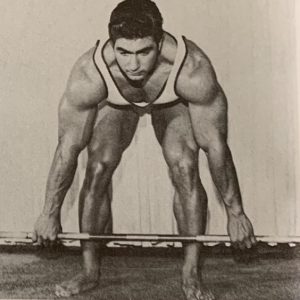 Deadlifts – This is one of the best movements for the lower back. Grasp the bar with both hands and slowly stand erect, trying to feel the action in your lower back. Return to starting position and repeat.

Dumbbell Swings– This is good for the lower back also for warming up. Bend the knee slightly. Swing the dumbbell between the legs and the overhead. The exercises I have listed are among the best exercises that I know for all-around back development.

Use self criticism and decide which area is the weakest on your physique. If your erectors or traps need work, then concentrate on them in your back workout. I usually pick out several exercises to work on whatever back muscle group is lacking.

Or you might want to take one exercise for each muscle group and do four sets each for 6-12 reps.”