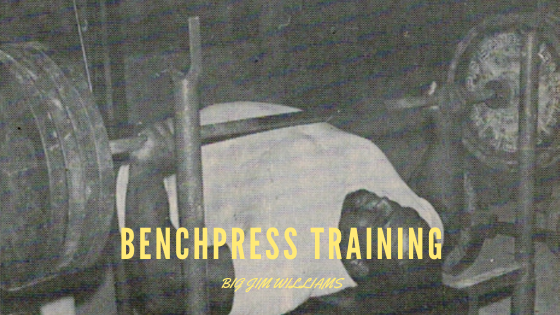 Here’s a must read. Powerlifter and Iron Historian ‘Bob Gaynor’ was friend with Big Jim and witnessed him benching. He wrote the following article in 1989 – Mr. Berg

“Throughout our lifting career we meet many individuals from many walks of life. My former training partner, Big Jim Williams of Scranton, Pennsylvania, is one of those individuals who made a lasting impression. There were many things that were unique about Jim.

He is black, very muscular and weighed about 340lb. when he was competing. Called the ‘Black Bear’ by some, he benched 675lb (1972 World Championships), and had very different training ideas and methods.

Jim also had a very different lifestyle. He grew up on the streets and lived by his wits and might. As famous as he was with the lifting community, he was infamous in the community of Scranton. His manner and activities would have been better suited for the Old West than our modern society. Jim had been known to order people out of town and settler matters with his fists.

Jim paid the price for his lifestyle and spent a number of years incarcerated. He has just recently been released and has changed his lifestyle. He wants to become a productive member of society. He also hopes to become involved with powerlifting again and is committed to writing a book on bench pressing which will be must reading. Bench pressing was what Jim was all about.

Since bench pressing may be the most universally practiced exercise, and with Jim being so great at the lift, there is a natural interest in the man and his methods. The 675lb he made in 1972 at the World Championships has not yet been officially topped  in IPF competition. When you compare other records from 1972 with today you can appreciate what a feat this was. Most of today’s records are 75lb or more than they were in 1972. At the time Jim benched 675lb there were less than ten lifters in the world over 550lb. At that competition John Kuc did 600lb., a distant second to Big Jim.

Based on this I would have to say Jim was one of the best, if not the all-time best in relation to others of this day. During my training with Jim I picked up many of his theories, which everyone could benefit from. Jim had an ability to get to the heart of a problem and make necessary corrections.

Jim was not a one lift specialist by any means. During his career he held the squat and total records in addition to the bench. However, his pressing strength was beyond belief. He could easily close grip (thumbs a few inches apart) well over 500lb. One day after completing our workout Jim stated he could military press over 400lb. We put the Olympic bar on the squat racks and loaded it to 375lb. Jim military press this weight easily. A 25lb plate was added to each side and again Jim militaried it. This was done after a workout and without any training on the lift.

If Williams had trained the squat and deadlift with the same dedication as the bench I feel he would have totalled 2500lb. He would have set records that would be unbeaten today. In a 1972 workout at the York Barbell Club Jim benched a strict 700lb.

In 1980 Jim was attempting a comeback after a seven year layoff. He was totalling well over 2200lbs. and his benchpress was close to 650lb. This was at forty years of age, with about 6 months of training.

Jim referred to benchpress as the ‘Cadiallac’ of the powerlifts. He felt the bench was the easiest of the lifts and the most practiced, but still the least understood. He knew there was a lot more to bench pressing than just laying on the bench and pushing.

Jim felt most lifters had a mental block about holding a heavy weight overhead. He often told lifters they must defeat this fear before they could handle heavy weights. Williams felt mental preparation was just as important as physical preparation.

His theories on bench pressing broke the lift into four parts:

1. Take off from the racks
2. Descent to the chest
3. Body position on the bench
4. Press itself

Jim always stated a good bodybuilding foundation was necessary to be a good benchpresser. Good triceps development, good chest development, along with the deltoids and the lats were required. To develop these areas Jim’s programs were not complicated, but did involve lots of hard work.

For the triceps he advocated a good bench workout followed by heavy triceps pushdowns. 8 sets of 6 to 8 reps. He felt no matter how much soreness you encountered you shouldn’t slack off. To be good at anything you must pay the price.

The chest could usually be developed with the bench itself. If you were really lacking in this area Jim would usually suggest some incline pressing. One thing he always stressed was heavy weights and low reps for the power movements. He felt high reps served very little purpose in building strength. To illustrate this Jim once followed a squat routine that went like this: 315×8, 315×8, 750×1, 800×1. He did not spend  any more time training than he had to. The gym is for lifting, not socializing.

Williams felt the deltoid muscles to be very important, but normally not well developed. Many specializing in the bench seem to neglect this area. Big Jim had his own special exercise for the deltoids; lowering and raising a heavy plate (50lbs and up) in front with arms straight. 5 sets of 6 to 8 reps per workout.

Start light, but add as quickly as possible. Seated barbell and dumbbell pressing were also advocated. He felt there was less chance of cheating in the sitting position. Jim said never sacrifice good form in order to handle a couple more pounds.

Bad form, by bringing other muscles into play, defeats the purpose of the exercise.

For the lats, both front and rear pulldowns on the lat machine. Again, lots of sets, heavy weights and 6 to 8 reps were what he thought was best. Large lats make a great base for launching the bench press.

‘Chimsey’, as he was called by his friends, felt all of this had to be accomplished before you could handle heavy weights. His upper body attest that he practiced what he preached.

You had to see him to believe his sheer size. I doubt that anyone, with the possible exception of Paul Anderson, had larger muscular measurements than Jim.

His upper body was as thick as some individuals are wide. He moved around as well as any 198lb lifter and had no medical problems.

Big Jim was very technical and thorough in his bench preparation. He used a one man hand-off and wanted the same person all the time. (Editor’s note by Mr. Berg: Hand-off was probably his best friend and powerlifting legend John Kuc!)

A bad handoff with a heavy weight was almost impossible to correct. Now for the benchpress with your eyes about one inch behind the bar. Place your feet solidly on the platform and forget them. The bar should be removed from the racks with aid, and lowered slowly and under control to the highest part of your chest as you lay on the bench.

At the press signal, drive the weight from your chest. Jim says the bar should travel in a ‘S’ shaped course. As it leaves the chest it will go slightly forward, then at about the halfway point it will begin to drift back over your head until lockout.

Once at the advanced stage, Jim felt there was no substitute for benchpressing. He benched five days per week and went heavy every time. He felt anyone could do this. The obstacles were mental, not physical.

That’s it. About 20 reps. If he did any more sets and reps, he could not repeat it the next day. He could be in and out of the gym before some lifters even got warmed up.

What you did in the gym would carry over the lifting platform. Lifting heavy weights is tough enough physically without adding mental barriers. You must be prepared mentally as well as physically. Williams also said: “Think, train, and lift – heavy.”

I am not recommending these routines to everyone. There was only one Big Jim Williams, but his theories contain information that is of value to every weight trainee.

I personally know many who have used his programs, His forced rep program helped 4-time World Champion John Kuc to bench press 600, for one.

What you must do with this information is determine what applies to you. Jim could bench five days per week, but I doubt if I could make it through one week on that program.

I learned a lot training with Jim as I hope he did from me. Once you stop learning you stop making progress.

Jim Williams was a great lifter and a good training partner. He certainly left his mark on the sport.”