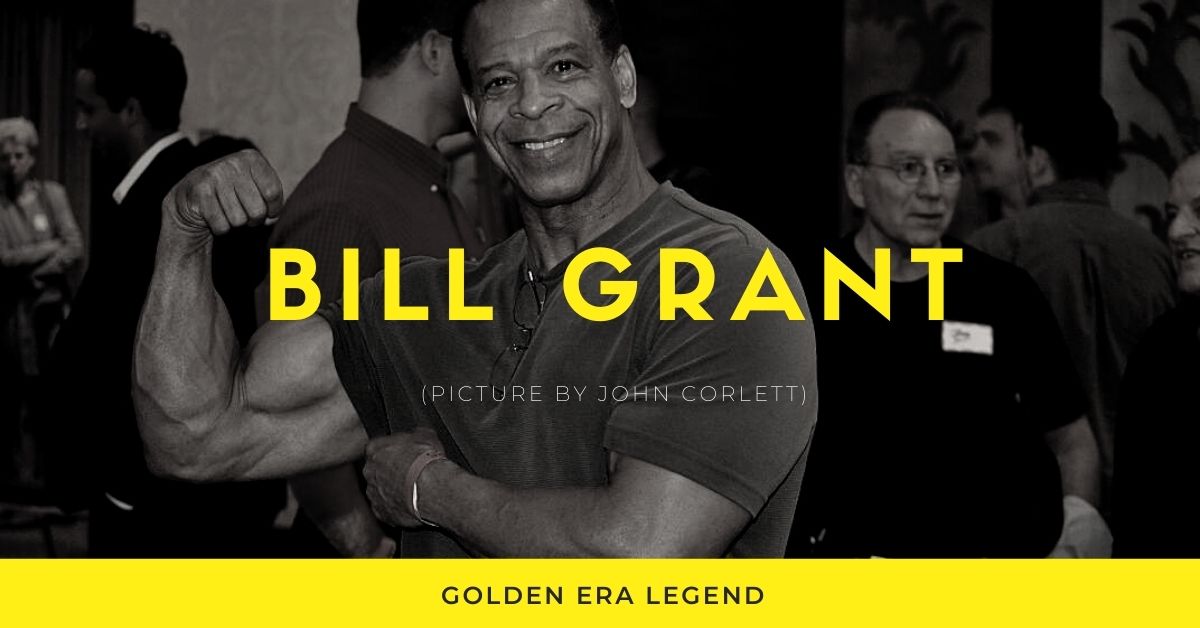 In this article you will learn the golden era legend Bill Grant. He competed against such legends Jim Haislop, Chris Dickerson, Boyer Coe and and and…Furthermore he trained with Arnold and Franco Columbo..Above you would see one of the most famous pictures! Arnold doing some calf raises and there are sitting two bodybuilders…Of course there’s Franco Columbo…and the other is BILL GRANT. Here’s Bill’s Story (Don’t forget to visit his great website and instagram account!!).

The following article was written by Bob Bendel in S&H mag 1969. – Mr. Berg

“Bill Grant, at the age of twenty-two, has already been training regularly with weights for eight years. While a freshman in high school he was inspired to begin his adventure with barbell primarily because at 110 pounds bodyweight he felt uncomfortably skinny. He soon discovered that the barbell path was indeed the road to increased muscular bodyweight. As his weight training produced muscular gains so in turn did the resultingg physical transformation further stimulate his enthusiasm to seek even more gains. Thus, it hardly strains the reader’s credulity to accept the fact that Bill would ultimately enter physique competition, Mr. Surburan Jr. and Sr., Mr. Capital City 1966, Mr. North Jersey and Mr. New Jersey 1968 are among the many titles which he has earned. He has consistently placed high in all other district, open and national contests which he has entered. This year, 1969, he placed second in the Mr. Los Angelkes physique contest, won the “best arms” subdivision.

Bill is quite impressive in a relaxed pose. Under posing lights he is terrific; he possesses an excellent physique and is expert at displaying it most effectively. Picture, if you will, a five-foot nine inch frame solidly covered with well-proportioned heavy musculature, with absoulutely no fat, tipping the scales at 185 pounds. The twenty-four inch thighs have squatted with 410 pounds and the pectoral major muscles of his forty-seven inch chest, with the help of his rugged triceps, have bench pressed 395 pounds. Bill’s deltoids have enabled him to standing press 245 in fine form, and he has proved the quality of his 18 1/4 inch biceps with a strict curl of 185 pounds.

I believe that the training program Grant is currently following will be of interest to the reader and will accurately and most clearly convey the methods by which his championship physique has been acquired. It is herewith presented complete andf in detail.

Saturday
Training on this day is designated to those areas where Bill feels need is greatest. This completes the somewhat unique 5-day split training routine which Bill believes has been most result producing. His favorite exercises include the curl, bench press, bent arm pullover and triceps press down.

There is no question that food supplements play a major role in supplying Bill with the stamina and endurance required for his strenuous workouts. His extra protein intake is quite essential in providing the building material upon which his virbant health and muscles depend.

In the process of satisfying these extra nutriotional demands imposed by his strenuous regimen Bill ingests Energol, Super Hi-Proteen, liver tablets (as much as 100 per day), bone meal tablets, Super B Complex tablets and Vitamin C tablets (from 500 to 1000 mg. per day). Bill claims that the Vitamin C is important for building internal resistance and also serces as a kind of “muscle cement”.

Lest one form the erroneous conception that the Grant diet is devoid of sufficient quantity and variety of regular foods let us examine his list of favorite culinary delights. Pork chops, steak, turkey and sausage constitute his preferred meats which he enjoys frequently.

Among other foods with which his meals are replete string beans, mixed vegetables, fruit juices and spaghetti are high on the preferential list.

Formerly a draftsman, Bill is presently an office stationer. His hobbies include playing billiards and immersing himself in all forms of music. Bill Grant is a young married man and the proud father of two very young sons whom he hopes to instruct, encourage and inspire along the lines of full physical, mental and spiritual development by molding himself as a fit example. I have faith in Bill’s ability to do this.”