The World’s Strongest Man ‘William Kazmaier’ was born December 30, 1953. Kazmaier is of german ancestry. His grandfather was born in germany and moved to america and married a native american indian.

Bill Kazmaier is well known for his pych up routine. The six foot-three, three hundred and thirty pound Kaz, saunters up to the bar, breaks open two ammonia capsules and crams them up his nostrils. He then inhales the fumes and gets an eye opening burst of exhilaration. That’s just the beginning. With his eyes bugged out and his face as red as a Georgia tomata, the enormous veins in his neck look as if they are going to burst. Kaz then lets out a terrifying scream, stomps his feet, and proceeds to attack the bar as if he was going to break it in two.

His way to the top was haphazardness. At Burtlington High, in Wisconsin’s Southern Lakes conference, Kaz was Big Man on Campus. As a fullback he was typically bigger, faster, and stronger than any member of the opposing team, and winning was easy, too easy.

One day he accepted a football scholarship to the University of Wisconsin. But as time passed Bill lost passion for football and after missing practise here and there he only played in 1975 and dropped out.

Kaz was lost inside. He tried finding himself. He went from oil ring roughneck, to bouncer at a strip joint..back to the oil rig, from there to logging in Alaska, to a shipyard in Morgan City, Louisiana..thence to a feed mill job in Millard, Wisconsin, following that he worked loading 100lb sacks of salt at a water softener company.

He was interested in archaeological aspects of Mayyan and Inca culture. For some times he lived down in Central America for 4 months. His bodyweight went from a solid 245lb to lean 210…10 months of no training. He cranked out 315lb for 5 sets of 5 on the bench. Then he knew powerlifting was the thing for him and here’s Bill Kazmaier’s story.

Kaz’ squat opener with 826lb was easy. And it seemed 887 would be also easy. But Kaz injured his lower back about 10 days before this meet.
In the bottom Kaz’ quad popped, the bar dropped and he is about to go flying forward to end up face down on the platform. He had to have a lot of assistance to get off the stage.

His opener in the bench at 584lb was missed on time, but taken easily on a second. He jumped to 633lb benchpress, which was a very hard lift. But he made it. He took no deadlifts.

1980 (July) Men’s Senior Nationals
Here’s a another story about Bill’s psych up routine:
In preparation for his winning deadlift of 804lb in 1980, Kaz’s coach “Bud Ravenscroft” was obviously as psyched as Kaz himself. To emphasize the importance of this attempt the coach hitted Kaz twice, to both sides of the head. Bill tried pulling 804lb, the bar was a good six inches out from his knees, a success defying position, yet Kaz pulled it in, and pulled it up!!

Strongman
He has not restricted his incredible attributes to powerlifting alone, he has attacked and virtually dominated every strength challenge designed. During a span of nine years he has accepted a more diverse and potentially destructive range of strongman disputes than anyone.

Bill Kazmaier vs. Doug Young!
The 1980 Strongbow Contest was a strongman contest that was held in England. Invitees included Kaz, Doug Young, Larry Kidney, Ernie Hackett and Lars Hedlund. It was a company of big wolves.

The competition consisted of a clean and jerk, deadlift (both of these events are performed to a one rep maximum weight) and as many shoulder press repetitions as possible with a pair of 121 pound dumbbells. Bill won the contest with a 374 pound Clean and Jerk, 837 pound Deadlift and 17 repetitions with a pair of 121 pound Dumbell Press. Hats off. Bill was able to beat guys with totals of 2050lb or more. And these guys used to bench press over 600lb!

1981 (January) Powerlifting Championships Total Record!
Before Kaz competed the rumors began to circulate around the country. “Kaz is in really good shape.. he will total 2500”

2 weeks before the meet, he went to Bill Dunn’s Strength Seminar at the University of Virginia.

Bill just entered the gym in which the seminar was held and took a couple of ‘public workouts’. The seminar participants were amazed by Kaz’ last deadlift and benchpress workout. Bill’s final bench workout ended with a triple with the existing World Record poundage!!

The competition was held in the auditorium of Columbus Junior college. He opened with an effortless 949lb squat, followed by 925lb.

He wanted to try 975lb but he was injured in his glute and thus he passed the third attempt.

Bench: 595lb, WR 639lb and 661lb benchpress…a World Record.
On this attempt, the bar actually wavered from Kaz’s control and he was forced to drive his elbows against his body to save the lift.
He made the lift but tore his pec slightly.

Then he deadlifted 744lb easily. This gave him the highest Super total in many years.

Second attempt: 837lb. On his final attempt he loaded 887lb on the bar. Kaz approached with his trademark of ferocious intensity and tore the bar upward, higher…until finally he locked out. But after passing the knees it was very slow. Only one light was white.

Doug’s meet seemed doomed only days before it was to take place..few entries had been received, and Doug did not want to be stuck with a load of meet t-shirts and trophies and no one to give them to. But several powerlifting stars appeared to make this meet a success.

But there were difficulties at this meet. The british lifters didn’t show. The lighting wasn’t right in the auditorium.

But Bill Kazmaier came out for his opening squat! He requested for 903lb. But there were problems with the platform..a little wobble here and there.
When Bill tried squatting the weight whipped its way right off his back and crashed the decking. He took it once again but dumped the bar at the bottom.

He stopped to squat and went over to the bench(remember his pec was slightly injured). Doug Young benched 573lb for his 2nd attempt.

Kaz made some easy reps and called for 600lb. Most folks thought this was the big single they had hoped to see.

Despite being injured he did FIVE solid reps!

In 1985 he turned his attention to the arena of professional wrestling, spending a year training for the game in Canada. Married, and also then a new father, this time spent away from home was far from enjoyable. He stopped the rough and tough world of wrestling to return to home, family and gym in Alabama. 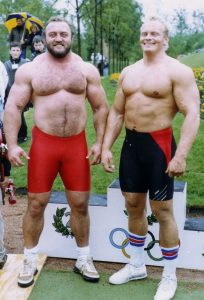 Kazmaier’s competed in six World’s Strongest Man contests. In 1979 World’s Strongest Man, he came in third after leading throughout much of the competition and beating powerlifting icon Don Reinhoudt. In the following years, he dominated the competitions in 1980, 1981, and 1982, winning all by a large margin. He was the first man to win the WSM title three times and remains one of only two men ever to win it three times in a row.

Despite being the reigning champion, the organizers decided not to invite Kazmaier to compete in the following four WSM competitions because he was too dominant

Actually Kaz’s and Sigmarsson’s paths would had never been crossed. Kaz knew little of the Iceland apart from his powerlifting performance in 1981 World Championships (Squat:744lb Bench: 485lb Deadlift:782lb).

A strength promoter in Scotland, familiar with Capes, Sigmarsson, and Kaz, thought that a challenge bringing all the together would be quite an historical event. The event was to be called the “Ultimate Challenge”. Jon Pall Sigmarsson was able to win 8 of 10 events.

For Bill it was an experience that he needed to apply himself, to be the very strongest man in the world!

October 1987 Kaz competed for first time in “Le Defi Mark Ten” International Strongman Contest, in Montral, Canada. The promoter had believed, as had many others, that Kaz had retired, but was delighted to have learned differently. Bill was there and the contest was a milestone in strongman history. 12.000 spectators paid to watch the event at the Montreal Forum. Bill was able to beat 9 opponents and placed first. Jon Pall Sigmarsson was present, but came fifth.

Today Bill is used to promoting the strongman sport and travelling through the world to hold seminars. He is also successful in making business. He is self-employed with his own coffee brand and merchandise.

Kaz has got also instagram, check it out! @kazmanaught
Coffee: https://www.kazkoffee.com/shop/