Bill Kazmaier is an American former world champion powerlifter. He was able to bench press 661.4lb/300kg. He was known for his psyching up before bench pressing. He used to break open two ammonia capsules and cram them up his nostrils. He sniffed and got an eye opening burst of ehilaration. He screamed, stompped his feet and attacked the bar! Bill’s training was also heavy and probably his key to the success. Here in this article you will read about his 10-Week-Bench-Routine. This routine lead him to a bench press record of 661lb!

Before using Bill’s training routine I would recommend to read his thoughts about technique and the importance of some exercises. But of course you can skip this short instruction and start reading the routine (it’s just below).

By the way, my writer Paul Leonard, had the pleasure of meeting Bill Kazmaier and to interview him. The article entitled “World’s Strongest Seminar” is a must read!

Technique and philosophy of lifting

For pushing movements you need well developed pectorals. Bill cites that heavy sets for medium number of reps are great for power in benchpressing. He recommended short rest 2 – 2.5 minutes. According to Bill the wide-grip benchpress (high on the chest) will build your upper pectoral and anterior deltoid.

For lower pectoral and tricep he recommended narrow grip bench press (low on the chest). Nonlockout (quick reps) for explosive power and this technqiue will build up the tension.

Opposing muscle group – lats and rhomboids. Upper back strength is important for the balance. Bill Kazmaier used always in the lighter training period the exercise “flat-bench flyes”. This exercise is also great for developing the pecs.

To train the upper arms helped Bill to excel from 300 pounds to 500lb in the bench press. He did flat bench flyes and he recommended to pay attention to the technique. You have to contract the pecs similiar during bench pressing.

How to get Massive shoulder
Dumbbell presses, front and lateral raises were great for Bill to develop power and size in the shoulder.

Dumbbell Presses technique
He turned his wrist to the proper angle, that you will be able to isolate the deltoids and to keep the triceps away. The triceps should not be too much involved.

Front and lateral raises technique
Technique and strictness is important. Bill recommended rapidly repping, rest 30 seconds for 10 sets. He used in his training 95lb dumbbell. For Bill heavy weight was important. Cable work should also work great to pump the blood through your muscle. This routine helped him to break the dumbbell press record at 165lb for 5 reps.

Triceps
He has developed an exercise ‘modified triceps press’. He lied on the back and used to bring an EZ-Curl bar three inches above his chest and locked his pectorals and deltoids. He pushed in a range of motion of 10 inches. He wanted to add constant tension in the muscle that’s great for triceps power. Most people used the exercise Nose Breaker (bar is above your head). According to Bill this exercise puts to musch stress on the ellbows.

He combined the modified triceps press with a decline triceps press, He used a straight bar and a narrow grip. He pressed heavy and rapidly.

Cable push down
It was just pumping exercise for Bill.

Hammer Curls are the most productive exercise to build up big for arms. Bill gave Mike Macdonald (600lb benchpresser) the tip to add this exercise in his training routine. And it helped Mike to build great balance during bench pressing. Bill used to mention the importance of training heavy and hard your forearms. 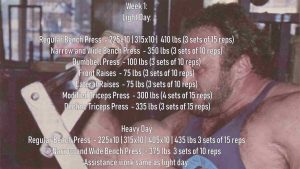 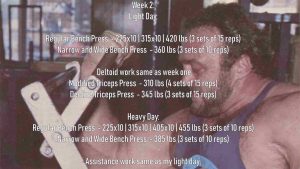 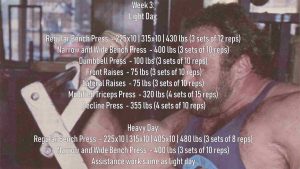 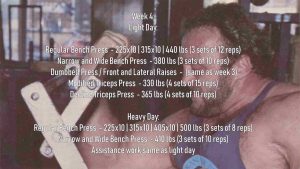 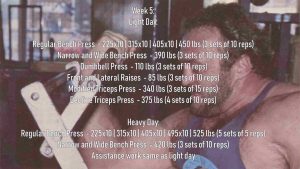 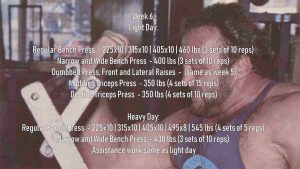 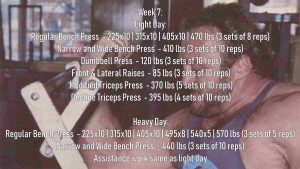 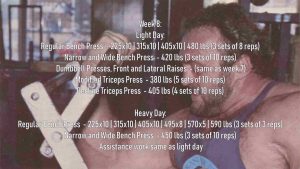 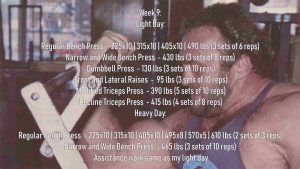 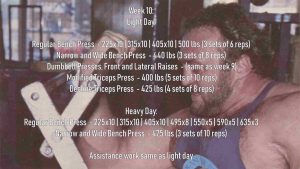 Editor’s Note
Bill has instragam with stuff about training. Check it out! And use the below tag-system and click the button “benchpress” or “world’s strongest man” for more articles developed by champions! Mr. Berg