Bill and wife, Judy, designed the layout of the club and it was a real testimony to their vision. The structure (actually two adjacent buildings) was formerly a realty office. But, with a quarter of a million dollars and much toil, Bill turned the building into complete facilities for conditioning men, women and children from 9 to 90.

The club was equipped with a sauna, whirlpool (one of the largest), steam bath, massage department, sun deck, large conditioning area, and advanced weight rooms. Adjacent to the building is a parking lot with space for parking of 36 cars, free to patrons.

He also installed a locker room with the most modern lockers, also available to members without charge.

Bill also installed a pleasantly decorated lounge area just off the locker room and showes. The lounge has a built-in stove, dish-washer and complete equipment for preparation of special health drinks, etc. Fresh bottled juices are kept under refrigeration for the members and free coffee is available for them.

Bill’s goal was to provide facilities that would fullfill the needs of all; from training for general conditioning or to become a Mister America. At the same time, he wanted suroundings so attractive that all members would feel pride in belonging to the club. To be sura that patrons received individualized instruction, Bill had limited the club’s membership to 500.

In the main conditioning room, all equipment was on selectors which made the weights available for immediate use and also kept the room neat. Among special equipment in this room was a universal gym and modern running machine.

Throughout the gym, Bill has placed antiques (Tiffany lamps, statuary, paintings and wall hangings) which gave the club a warm atmosphere. Adjacent to the main conditioning room were two counseling rooms where members may withdraw to confer with Bill or Judy on their special training programs.

In addition to the main conditioning room, the club had two spacious heavy workout rooms which were open to male members at all times. These rooms had a Spartan, atmosphere with plain walls, bright lighting, rubber tile floors and some of the most modern benches and equipment and of course heavy weights for complete conditioning. Additional showers and dressing rooms are adjacent to the heavy workout rooms which permit the men to use them when the main conditioning rooms were occupied by ladies.

From Bill Pearl’s facebook page:
“I purchased George Redpath’s Gym, located on Manchester Boulevard in south central Los Angeles in 1959. It was the first coed health club in the United States and established by Redpath in 1949. There was an apartment on the second floor were I lived for over 10 years.

The club had a reputation for attracting all walks of life. Olympic shot put champion, Dallas Long and World Champion discus thrower, Rink Babka were steady members. Jim LeFever, an infielder for the Los Angeles Dodgers seldom missed a workout.

World powerlifting champions Pat Casey and Bill Thurber set unofficial records at the gym, between major competitions, while top athletes from the University of Southern California used the facilities.

Once word spread that I had purchased the gym, it attracted even more hardcore athletes and bodybuilders. (The gym’s mission statement should have read: “Bigger and Stronger is Better.”)

Dennis Tinerino, a four-time Mr. Universe winner, prior to winning his major competitions, left New York City to spend his summers training at the gym and used an exercise mat for his bedroom.

Chris Dickerson, the 1982 Mr. Olympia, another of my prize pupils, got his start at the Manchester location.

On Saturday afternoons, from 2:00 to 5:00 the front door of the gym was open to anyone who wanted to train free-of-charge. This turned the gym into an even larger three-ring circus. People came to watch and others came to impress.

One monster, with hands the size of baseball gloves, challenged all-comers to a finger-pulling contest and ended with his finger broken.

I won the 1961 and 1967 NABBA Professional Mr. Universe titles mainly due to the intensity and craziness I trained around. You had to be good to hang with the members.” 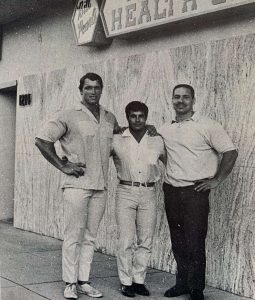 Franco Arnold and Bill Pearl. They are standing at Bill Pearl’s Gym. Photo by Robert Kennedy.

Note by neckberg: I emailed Bill Pearl and asked him if he ever coached Arnold.

Bill Pearl: “Hello Neck. I never trained with Arnold or gave him advice. I was an outsider to the Gold’s Gym Crowd. They were mostly IFBB and I was mostly AAU.”

Editor’s note: Use the tag system and click “Bill Pearl” for more articles!