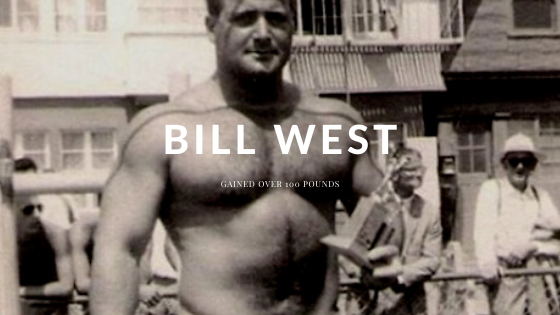 “The story of Bill West, the California strongman, is a revelation of what a special diet combined with weightlifting can make out of a thin weakling. Bill weighed but 102 pounds when his hands first touched a barbell; and after a few years this bodyweight soared to 218 pounds due to progressive lifting and living chiefly on peanuts. But let me go back to the time he began.

When Bill was 15 1/2 years old in 1952 he associated with Gene Wells, who lived near him in Pennsylvania Wells, at the time, held the physique title of Mr. Pennsylvania. And Bill at the time had never heard of health foods, vitamins, proteins or rightful living. Neither had he ever given a thought to lifting a dumbbell or any sort of weight. He was just a thin backward kid who looked at sports rather than being one of the players. However, it was Gene Walls who prompted Bill West to try some weight training and to build up his scrawny body, and so Gene got him started with very light bells. Hence Bill gives Gene Wells much credit for his start in the iron game.

In the month of July of 1952 they both became keenly interested in a copy of this magazine and became fascinated over an article about “Muscle House by the Sea” at Santa Monica, California. And so both of them immediately decided to get to the West coast pronton! They did. And right to this Muscle House they went!

Now this famous abode is owned and operated by a lovely lady, Fleurette Crettaz, who is also known around her locality as “Joy.” This is undoubtedly due to her friendly and optimistic disposition, as she is every striving to help everyone along healthful avenues and rightful ways of living. Her large house is always filled with musclemen and health enthusiasts and is strictly vegetarian. This lady looks after her flock of muscle boys just as though they were her own children. A great many of the past Mr. Americas and other prize winners have lived there, as have numerous noted lifters. Bill West and Gene Wells felt right at home when they first entered her door.

He is known as “Peanuts”

This is the nickname the gang bestowed upon Bill. And the reason for it is that he was given a rigid diet at Muscle House of proteins, chiefly peanuts. He ate one pound of raw peanuts daily, also a half cup of peanut butter each day as well as six spoonful’s of raw peanut oil each 24 hours. Of course, in addition to all this peanut intake, he had numerous protein drinks and raw milk as well as many assorted fruit juices.

Within 60 days he leaped from that 102-pound mark to 132 pounds bodyweight. And at the end of the first year he went to 155 pounds as he kept right on devouring the peanut variations. He had, however, settled down to weight training.

His experiences during the second year with weights and peanuts were a trifle discouraging to Bill as he went to only 165 pounds. Perhaps he had expected too much. But during his third year of training he increased to the 180-pound mark in bodyweight through heavier lifting.

It was now 1955. He then became interested in entering lifting events. In his initial local experience he took second place in the Muscle Beach lifting meet and first place in the odd lift meet. He was a novice then yet he managed to do a 230 press, a 205 snatch and a 280 clean and jerk. Also in that same year, 1955, he won an A.A.U. odd lift meet with a 330 bench press and a 420 squat. But he was far from satisfied. He aimed at higher goals and greater power.

He went on a heavy squat and press program
“Peanuts” next chanced to meet Isaac Berger, who advised him to increase his bodyweight to 198 pounds. Bill West then trained with Berger and also Dave Ashman, lifting heavier and heavier poundages as well as increasing his diet of peanut intake. He could almost see himself enlarging weekly. His aim was to get heavier and so he went on a more severe lifting program until one day, when chancing to weigh himself, he was amazed to find the scales showing 218 pounds! It revealed also the benefits derived from heavier training and greater protein intake; but Bill was actually far too heavy. He recalled how Isaac Berger suggested an increase to that 198-pound figure and now Bill was 20-pounds over the mark! But he felt powerful. Nonetheless, he decided to reduce.

His next step was to eliminate excessive peanut eating and milk drinking and so by controlling his protein diet and eating less, he began to reduce. It wasn’t too long before he was down to that desired 198-pound class. And he has stayed there ever since. After all, for his height of 5 feet 7 1/2 inches, that bodyweight is sufficient. It also places him in that desired lifting classification.

“Peanuts” has absolutely no desire to train for muscular effect. His entire interest lies with lifting exclusively, and he especially enjoys odd lifts.

He is now performing in training and with reps, 435-pound bench presses; 525-pound squats, and also curls of 175-pounds in strict style. He can easily power clean 305 pounds, push-jerk 360 pounds off the rack, split-jerk 330 pounds and without training for these latter events. Bill also presses a pair of 145-pound dumbbells together at an 85 degree angle. He also does three sets of 10 reps in presses with 100-pound bells together; presses 242 1/2 pounds behind the neck, collar to collar. He has also done bench squats from a 19 inch high bench with 770 pounds.

He likes everybody and everyone likes Bill West

I have found Bill West to be a swashbuckling openhearted fellow with one of the most electrified dispositions I have ever encountered in years. He seems a mass of energy. One grand thing in his favor is his honestly and truthfulness. He speaks with authority and relates facts, especially about his lifting poundages. His sense of humor is immense. Once I chanced to catch him standing and talking in the midst of a group of seven or eight fellow. Bill was gesticulating and smiling as he talked and all the other guys were continuously enjoying a prolonged spell of laughter. He’s a quick thinker and a very rapid talker; and yet remains true to himself, and that’s saying really something. One example of his appreciation for what others have done for him was emphatically requested by himself in that I kindly give full credit to Gene Wells and Isaac Berger for his earlier progress, and also to mention of the healthful benefits he obtained while living at Muscle House by the Sea.

He is a hearty eater yet lives on but two meals daily. He also trains every day with the alternate system. He performs all upper bodywork one day and all leg work the next day. He tells me that he takes about three hours for his upper body training and but 1 1/2 hours for his leg work.

He has eliminated all milk from his diet at present in order to hold down his bodyweight at that 198-pound figure. And he only drinks a lot of water during his training period, not other wise.

It was a bit difficult to learn his measurements as he hardly knew them himself. But after my request to get these, he passed a tape around himself and secured the following: Chest 39 inches; waist 35 inches; thighs 27 inches; and arms 17 1/2 inches.

He prefers home training as he finds he can secure better concentration than he could by working out in a crowded gymnasium. Hence he has his own training quarters in his garage back of his home where he and a couple of friends have their enthusiastic workouts. 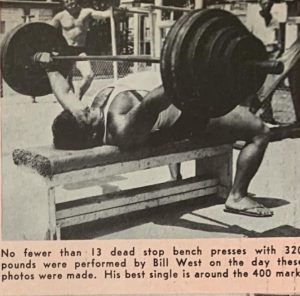 Bill West’s ambition at present is to soon make a 600-pound squat a 500-pound bench press in strict style at his present bodyweight of 198 pounds. Will he do it? I’ll wager he will! He has learned that if anyone wants strength he must use strength to get it. And I am sure that you will be reading more and more about “Peanuts” each year as he progresses with his odd lifts and attains his goals.

Bill is a shining example of how a once scrawny weak youth can transform himself into a full-fledged heavyweight with a body packed with powerful. And all through heavy weight training and the right diet. However that peanut diet adds food for thought also.

My own personal opinion regarding such a forced extremely heavy protein diet should be supervised by someone who thoroughly understands the complete functioning of the organic system, and then also outlined as adaptable to each particular individual. Otherwise a beginner might overstuff himself with far too much “oily” protein and such might have unfavorable reactions. And yet there remains always something in life to contradict logic. If Bill West’s experiences with such a peanut diet combined with weight lifting can produce a body packed with power and filled with energy, it is worth acquiring through similar methods. All barbells and other weights have been tried and proven throughout the years, therefore no further suggestions are needed concerning their usage. I merely caution a beginner against a too “oily” diet unless given under expert supervision.

Anyway, this frank and open account of “Peanuts” West has given me pleasure to impart to my worldwide congregation of readers. But let me repeat: everybody likes Bill West and Bill likes everyone.

Such a combination is bound to make this world a happier place for himself and for others.”