Board Press – A History and Practical Application 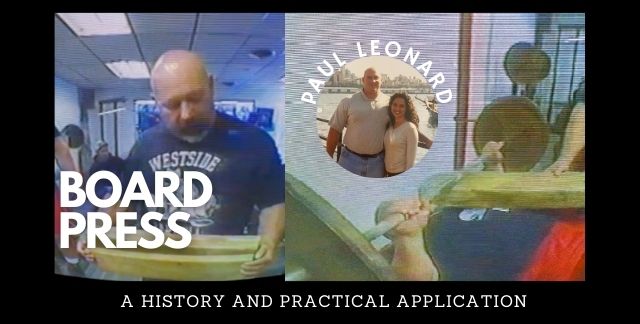 The board press is a popular exercise that has been used for over 50 years to improve bench press performance. Originally used by the Culver City Westside crew– the board press was re-introduced to the strength seeking world by Louie Simmons’ Columbus Ohio Westside Barbell in the early 1990s. Louie’s articles described how his lifters all used board presses to improve their bench presses.

Louie gave full credit to the original Westsiders for coming up with the idea to use board presses to build their benches from various sticking points. On a Powerlifter Video Magazine from 1996, Louie demonstrated how he used 2 x 4s, from 1 to 3 boards placed on the lifters chest. The lifter would take the bar down to however many boards were on the chest- not allowing the bar to sink into the boards too greatly- then pressing the bar from the boards to lockout.

Louie said in that video that he had given up on the board presses years earlier, but Jesse Kellum convinced Louie to revisit them after Jesse set an all time world record of 602 in the 198 lb class with a bench shirt. Louie explained in the videotape presentation that board presses were part of the 3 to 4 week rotation of max effort exercises used by Westside’s best benchers. The max effort method would call for a maximum single to either 1 to 3 boards, using a close grip.

Kenny Patterson is shown on the tape and Louie said he had a 600 lb board press to a board with a close grip- at the smooth of the bar, as well as a 620 press with his pinkie on the ring.

How the board press has been adapted and changed over the years. The first man to total 3000, SuperD Donnie Thompson, who benched over 900lbs, wrote an article claiming that board presses were a great assistance exercise, to be used for 5 sets of 5 reps. He said that short lifters should use up to a three board, while longer armed lifters should use a 4 to 5 board.

The rotating of the boards are to be done as quickly as possible so the set continues without any pause between boards. The goal is to complete 5 presses from 5 different levels as quickly as possible- to overload and stress the fast twitch triceps. Lifters supremely conditioned such as Mike Martin and Glen could then continue from the 5th board back down to the 4 board for 5, then the 3rd board, all the way to the 1 board- for 50 total reps!

Over the years, companies have created products such as Bench blockz and shoulder saver pads, which are devices that attach to the bar- mimicking a board press without the need for someone to hold a board on the lifters chest. I feel these are good options and I have used both. There are numerous YouTube videos from the creators of these products that should be helpful.

Like most of Westside Barbell’s max effort exercises, board presses could be varied by accommodating resistance modalities such as bands and/or chains affixed to the bar.
Although board presses have been associated with shirted bench press training, but in my experience they are useful for raw benchers as well. Matt Wenning, who benched 612 lbs raw, wrote an article how he would bench full range of motion for max effort work one week and then the next he would do board presses the next week for his max effort work, because the pectoral and deltoid tie in do not recover as quickly as the tricep/ lockout phase of the bench. As for myself, after numerous pectoral tears over the years, I have found board presses as a great way to work my bench when my pectorals felt unrecovered.

Board presses can be done with a standard power bar, an axle, a thick squat bar, a parallel grip bar, or any of the bandbell bars made by Louie Simmons old training partner Jimmy Seitzer.

Give board presses a try and I think you will see that they help you build power in your triceps that no other exercise can. This is due to the fact that the limited range of motion leads itself to the use of heavier weights than any other isolation exercise of the triceps.