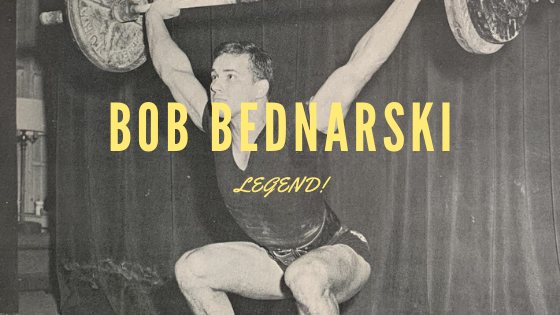 The following article was published by iron historian Jon Terpark (1965). In this article you will learn Bob Bednarski’s training program. Use the great tag-system below for more weightlifting articles! – Mr. Berg

“This young man is a true credit to the sport and if he is able to keep his bodyweight below 200 pounds, he will soon be a serious contender for the middle heavyweight championships of the United States. His name is Bob Bednarski. Recently, when talking with him about his training and background in the sport, he presented me with a very complete and comprehensive history of his weightlifting years. So, in his own words, here is the story of a dedicated young American – Bob Bednarski.

“I was fifteen years old when I first lifted a barbell. I weighed 125 pounds and was only able to lift 90 pounds over my head, so as you can see I was not a ‘natural’ in any sense of the word. However, although I wasn’t very strong, I burned with a deep desire to excel. In short, the barbell bug had bitten and bitten hard.

“Training hard I made fast progress and in about nine months I entered my first contest – The Rhode Island State Championships. I competed in the lightweight class and made lifts of 170 press, 170 snatch and 215 clean and jerk for a total of 555. This gained me a second place, but the most important aspect of the contest was that I was fortunate enough to be beaten by Joe Mills, former National Champion and record holder. From that time on, Joe took an active interest in my eagerness to lift and became my coach.

I honestly believe that had it not been for his guidance and inspiration I would never have made the progress I have made since that time. I steadily improved gaining weight as my strength increased. I made my first record in the middleweight class with a total of 700 pounds for a new Rhode Island State Record.

“I was not to remain a middleweight for long, however, for I soon moved up to the 181-pound class, where I was able to break all of the state and New England Teen-Age Records. The climax of my performance in this class was the breaking of the Senior New England Press Record with a lift of 275 pounds.

“Once again I was forced to move into a higher body weight division, the middle heavyweight class, where I hope to remain. About this time in my career, my lifts hit a standstill which was not broken until I began to train on Isometric Contraction. I built myself a simple rack using two 2×4’s with holes drilled for the bar about every three inches. I didn’t practice I.C. exclusively, but mixed my rack work in with my regular training, doing three pulls and two pushed isometrically on every day that wasn’t regular lifting day.

At this time I used weights about two or three times a week. I believe it took about two months of this mixed training before the results began to show, but within six months I had increased my total by 100 pounds. I eventually discontinued my isometric work as I found that although it gave me power, it seemed to adversely affect my style.

“That year I entered my first Senior National Championship at Harrisburg, making a 307 press, for a new Junior World Record; a 267 snatch, for a National Teen-Age Record. Upon returning home, I continued to train and enter competitions. In one meet, I was fortunate enough to break four state records, four New England Teenage Records, four National Teen-Age Records, two Senior New England Records and one Junior World Record. My lifts at this contest were 321 press, 270 snatch and 340 clean and jerk for a total of 931. I believe that my press that night of 321 was the best lift I have made to date, as my bodyweight was only 190 1/2 pounds. This was just before my 20th birthday.

1964 was a good year for me in my lifting. I managed to win the Junior Nationals at the World’s Fair and capture the Outstanding Lifter Award with a new Junior National Record. In November of 1964, I won the North American Championships at York with lifts of 320 press, 280 snatch and 360 clean and jerk for a 960 total. Upon returning home, I dug into my training more seriously than ever before in my life, and within a short time, my lifts increased to 330 press, 290 snatch and 390 clean and jerk for a total of 1000. Just after making this total, I sustained an injury and was forced to take a month off from my training, but I have completely recovered and hope to put up an official total of 1000 pounds before long.”

Although Bob is an unassuming person and didn’t seem overly fond of going out on a limb with predictions as to his future lifting, he is a youngster of considerable pride as befits any athletic champion and I was able to coach the following information from him: “Predictions are a very touchy subject, but since you asked me to stick my neck out, I’ll say this. If I receive no more injuries for a while and am able to continue training as I have been lately, Bill March and Lou Riecke will have their work cut out for them at the Senior Nationals in California.

However, even if I’m able to win the championship of my own country, I won’t be satisfied until I become the best middle heavyweight lifter. In 1968, I hope to total in excess of 1100 pounds, which I’m sure will be necessary for victory. 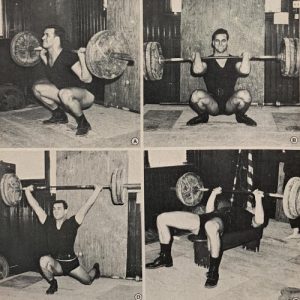 “Concerning my training, I believe that to be successful, a lifter should have a combination of things – love for your sport, fierce ambition, regular competition, training variety, and unlimited mental goals. At present I am working on the following schedule, although I vary it on the average of once every two or three weeks.

On one of these two days, I work to my limit and attempt to break my best total record.

“Each of these workouts lasts about one and one-half hours. I feel that one of the most important ingredients for progress is to train with a partner you can compete against, even if you must use a handicap.

My training partner is Jerry Ferrelli, an 18 year old unknown lifter with style, ambition and unbelievable strength, a combination which I believe will one day make him the best lightheavyweight in the world.

I met Jerry when the local YMCA asked me to train and aoch a group of boys at the “Y” gym. Jerry was one of these boys and I soon saw his possibilties, and we became training partners and the best of friends.

As an example of his remarkable potential, Jerry had made a squat cleanof 380 pounds at 180 pounds bodyweight after only sic months of serious Olympic lifting.

“My best lifts at various bodyweights through the years have been as follows:

At the present time, Bob weighs 195 pounds at a height of six feet. He lists his measurements as: neck, 18 inches; arm, 16 inches; forearm, 14 inches, wrist, 7.5 inches; chest normal, 42 inches; chest expanded, 47 inches; waist, 30 inches; thigh, 25 inches; and calf 16 inches. Bob graduated from Mt. St. Charles High School and is currently employed as a sales clerk. In 1964, Bob won the Massios Award for the third consecutive year. This is an award made yearly for the most outstanding lifter in the New England area. Recently, he won the Edward Haire Award which is a yearly award given by the Sportscaster of Rhode Island for the most outstanding AAU athlete to live or compete in that state.

He was also chosen in 1964 to receive one of two athletic awards presented by “Words Unlimited” to Rhode Island’s outstanding athletes. As you can see, Bob is the sort of young man we need in this country if we are to be able to continue to play a dominant role in international lifting. His sacrifice, perseverance, and success should serve as an inspiration to the aspiring lifters of our land.