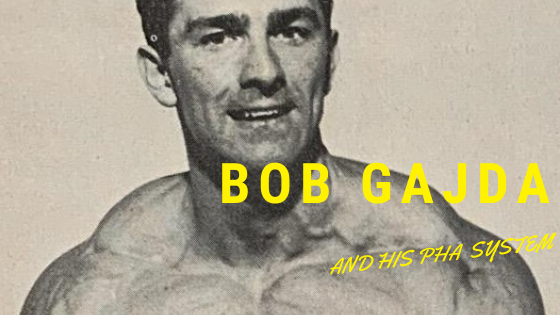 Oldschool bodybuilder Bob Gajda is considered by many to be the physique surprise in the 1965 Mr. America contest. His nickname was “The Darkhouse”. In this article you will learn how he lived, ate and trained. The workout routine at the end followed Mr. gajda prior to winning the 1965 Mr. USA contest. – Mr. Berg

Bob Gajda was born on the Near North Side of Chicago on September 13, 1940, to Marie and Steve Gajda. He is the oldest child and has two brothers and a sister. His interest in athletes was learned very early in life since his father was very active and successful boxer in the late 1940s. Steve Gajda won the National Golden Gloves middleweight title and had the distinction of fighting the great Tony Zale twice in his ring career. Young Bob’s interest turned to other areas of sport, however.

In his grammar school days at St. Boniface he was leading the school softball, volleyball and baseball teams to city CYO championships. At Gordon Techn High School Bob contends that he majored in basketball, football and baseball.

He lettetered in all three and was the captain of the football squad in his senior year. It was this motivation to become better than average in any endeavor that he participated in that guided him into taking a step that has greatly altered his life. At 15 years of age, weighing a strapping 125 pounds, he had genuine aspirations of becoming a football player for Gordon Tech. He knew, however, that he was too small to really become proficient at this rough and tumble game.

Norb Grueber, the Central AAU Weightlifting Chairman and owner of the famous Bodybuilder’s Sports Shop, convinced Bob that weight training would assist him in putting on those much-needed pounds. So, in the summer of 1955, he took the advice of Mr. Grueber and purchased a York standard set and began a weight training program. When football season rolled around he weighed in at 150 and weighttraining had another convert. Each summer thereafter he continued to train with weights and to grow both in size and strength.

It was not until he graduated and joined Uncle Sam’s Flying Force that he was able to concentrate on the full development of his potential. To be even more specific, it was not until he was stationed in Thule, Greendland, that he really became seriously interested in developing his physique to the fullest.

Thule, with all of its shortcomings, does provide two exxential ingredients for the aspiring bodybuilder – excellent training facilities and plenty of time in which to train. From 1958 until his discharge Bob traveled from base to base for the Second Air Force Command setting up and administering Conditioning Units.

Immediately upon his return from overseas he entered his first physique contest. That first year he took home a bumper crop of gold as he annexed the Mr. Pre-Novice Chicago, Mr. Novice Chicago and Mr. Junior Illinois, all in 1959. When he was asked why he selected bodybuilding over all the other sports in which he excelled he replied,

“I went into physqiue rather than judo or some other sports mainly because of the time factor. In weight training I can fit my workouts into my tight schedule. I can train by myself at any hour of the day that I might have free. I could not expect to do this in other sports”

Early in 1964 Bob made the decision to lay off bodybuilding movements completely and to devote his entire energies to competitive weightlifting. He had two motives in mind. First, he wanted to earn his athletic points for the top physique honors and secondly he wanted to attack his physqiue from an entirely different angle.

Under the careful and expert eye of his training partner, Sergio Oliva, he learned and perfected the three Olympic lifts. His improvement, with just a year’s serious training, was terrific to say the least. He totaled 740lb as a middleweight at the 1965 Illinois State Championships and put together lifts adding to 785 at the Junior Nationals that same year. Some of his best lifts are:

While he was engaged in competitive lifting he worked out six days a week for approcimately 1 1/2 hours per session. He concentrated on his form and speed by doing only singles on all of the Olympic lifts. He selected one lift per session and added one pressing movement, one pulling movement, plus some leg work.

He comments that the credit for his rapid improvement in lifting should go to his coach, Sergio Oliva.

Soon after being discharged, Bob took two other giant steps that have greatly altered the course of his life. He enrolled in the University of Indiane as a pre-med student and later transferred to George Williams College. He received his B.S. in Physical Education from the latter institution.

He was a “B” average student throughout college and is sincere in his pursuit of knowledge. He was engaged in independent research on the little-known phenomenon of “blacking-out” while engaging in heavy lifting.

The second giant step that he took after being discharged was that of matrimony. Patricia Girka, also of Chicago, became Mrs. Robert Gajda in february of 1961. The Gajda’s first and only bunlde of joy arrived Novemeber 14th 1965 in the form of a daughter, Kasha.

Bob stresses that much of the credit of his successes must be given to Pat. He confesses that without her encouragement and understanding of all of his quirks and idiosyncrasies he would not have been able to have gone as far as he has today.

“She has had to put up with my special diets, my many hours away from home, my frustrations and my disappointments. Only because of her belief in me and my aspirations have I been able to achieve the relative amount of success that I have.

She has sacrificed much in order to see me do what I want most to do and I am very grateful.”

Many of Bob’s ideas of exercising are certainly atypical. For example, he does not believe in taking measurements. He believes that the main goal of all physique contestants should be that of appearance and symmetry.

Those viewing him on the posing platform will verify the fact that he does “practice what he preaches.” He also subscribes to the theory that the body should be useful, or at least useable. Hence, he emphasizes full-range movements throughout as well as including many flexibility exercises for agility.

In his training sessions he follows the PHA system (Peripheral Heart Action). This means, simply, that he moves from exercise to exercise without rest, but he does not stay on any one body part until it becomes congested. Rather, he works in a circuit so as not congest any one part. Circulation, then, is his purpose. He will move over the enitre body, then begin at the top and work through again.

This he contends, “saves time and does not fatigue the individual muscles.” He has worked very closely with Dr. Arthur Steinhaus, the renowned Dean Emeritus of George Williams College, in setting up his training philosophy. He trains six days each week for two hours at each session. He varies the exercises each day – again, so as not to fatigue any one muscle group. 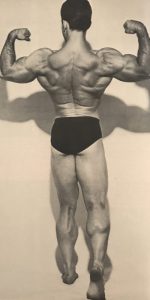 Bob believes that dietary supplements are essential for the maximum growth of muscles. He takes Vitamin C, liver tablets and a multivitamin tablet daily. His diet is very high in protein, with much attention given to eggs, meat, and  cheese. He has been able to fluctuate his weight between 165-195 over a short span of time without any great loss of strength.

Bob is a rare individual in that he does not believe in bulking up and then “sweating it off” before a contest. He admits, however, that he has very thin skin and any weight that he adds tends to show only as muscular weight. Spectators who saw him at York for the Mr. USA competition saw him at his heaviest ever when he tipped the scales at 196. He also believes that proper rest and a positive mental attitude are important if one is to rise to the top in any endeavor.

The following is the training program that he used in preparing for the Mr. USA contest. He notes that the poundages recorded here are averages since he lifts largely by the way the weights feel on a given day rather than adhering religiously to a predetermined poundage.