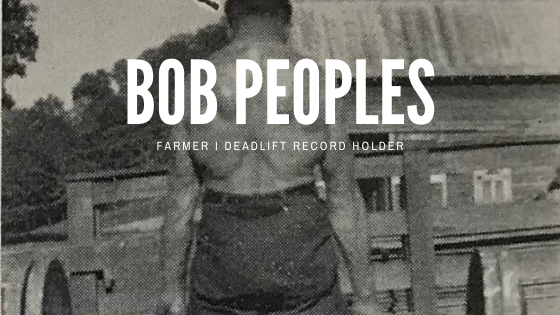 In the mountainous section of Eastern Tennessee near Johnson City in the year of 1910 Bob Peoples was born. His parents were farm people and were very sturdy people of Scotch – Irish ancestry.

Bob led a normal farm Boy’s life and played the usual games that are played by boys. In his early youth he was quite thin and his desire was to build a sturdy body. His father possessed two fifty pound dumbbells and quite often had a work out with them. Of course these heavy dumbbells were very awkward for Bob to work with but through much determination he developed his body so as to be able to jerk the fifty pound dumbbell with either hand.

Bob and his father wrestled quite often and of course Bob was no match for his father. His greatest desire was to develop his body so as to be able to throw his father. One day he noticed on the news stand in Johnson City a copy of the old Strength magazine. He took the magazine home and read and reread every article in it. As the advertised adjustable barbell were so expensive, he decided to build himself a barbell. He took a shaft and constructed a kind of a barrel on either end of the shaft and graduated the weight by placing stones and other objects in the barrels. Through this crude method of training Bob built enormous strength and soon he was able to alternate press his father’s fifty pound dumbbells with ease.

He also became more of a match for his father in their wrestling bouts.

While attending Valley High School Bob became quite interested in livestock judging. As a member of Future Farmers of America he represented his school in the Eastern Tenn. Livestock Judging Contest and won easily. He then went to Nashville for the State finals and also won that contest. He was sent to Kansas City, Mo. as the Tenn State representative and won high honors in the National Royal Livestock Show.

After finishing high school, Bob entered the East Tennessee State College located in Johnson City. He played one year of football and readily saw that he needed more bodyweight and strength.

By this time he was twenty-one years old and he started to train with crude apparatus more diligently than ever. He was a regular subscriber of all the known strength magazines and he followed first one course and then another, always specializing on the deadlift.

In 1934, Bob had some cast iron plates made at the foundry in Johnson City and he secured a steel bar and started practicing overhead lifting. By 1935 he had made gains on these lifts until he could press 170, snatch 190 and c&j 220. Bob could clean much more weight than he could jerk this being caused by all his concentrated efforts on deadlift.

From 1935 until 1938 Bob trained all alone and his lifts made some improvement. HE had never seen a contest or for that matter never seen anyone else lift other than some of his neighbors that he had instructed.

Bob entered the 1938 Tennessee State Championships in Chattanooga and made the following lifts as a light heavy: press 180; snatch 200, and clean and jerk of 230. This total failed to win in his class but Bob went home with a lot of experience and more determination than ever.

He entered the meet the following year and made sill a higher total, but the high light of the meet was his deadlift of 600 pounds. He cleared the floor with 625 but was unable to stand erect.

During the war years, Bob like all the rest of the lifters only trained intermittently. His farm duties kept him very busy supplying the much needed foodstuffs.

The 1946 Tennessee State Championships saw Bob in action again. He had been specializing on the deadlift hoping to set a world’s record. In this meet he officially dead lifted 651 3/4 pounds, the weight and Bob were weighed before ten responsible people. Bob weighed 180. Such prominent men of weightlifting as Karo Whitfield, South Eastern AAU Chairman, Leon Greene, National Chairman of weightlifting; Mood Gault, qualified Weightlifting Judge; Rye Bell, weightlifting Instructor at Frye Institute of Chattanooga; Bob Hise and five others signed the affidavit stating that the lifter and weight had been weighed and the weight was 651 3/4 the man weighed 180 1/2.

Bob Peoples deadlifted officially 710 pounds at a how in Nashville Tenn.

Bob lifted in The Southern Championships held in Chattanooga on Dec. 7 and pressed 205, snatched 220 and clean and jerked 260. Cleaned 275 but failed to hold the jerk. 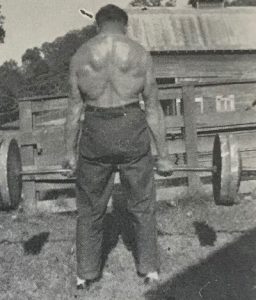 Bob Peoples is a very congenial fellow. He is also a very successful farmer. He has a charming wife and a small daughter. His wife has been very helpful in his training programs for his work forces him to train at odd hours of the day and she is always co-operative in planning his meals etc. to coincide with his training programs. Here is a lot of Bob’s measurement and best lifts.

Bob Peoples’ close friend Bob Hise tells about the training methods of Bob Peoples
“I have talked with Bob a lot about his training program and he was always specialized in deadlifting in all the various forms. He started by doing exercises to build all around strength, such as carrying heavy objects for a great distance. Early in his lifting career he would load up his home made affair and carry it down a hill in front of his house and walk across a small foot bridge, climb the steps to the road – rest a short time and retract his course.

Another of his pets has been exercising on a special device of his built to resemble a large open box with a pulley on one end on top through which he ran a rope and tied a weight to the end dropping down. Then he climbs on top and grasps a broom handle tied to the other end and performs rowing exercises just as he was rowing a boat. He has used around 600 pounds in this exercise. He has also done worlds of stiff legged deadlifts, half squats and full squats. When specializing for a deadlift contest he does only squats, deadlifts of several variations and some presses for stability. His recent program for the Boone match and his Nashville lifting was as follows:

He does part of his lifts stiff legged in training and his competition lifts are done about half way between flat backed and stiff legged.

He does all his competitions lifts with a regular OVER GRIP and hook. He has learned he can do more in this manner because a reverse grip puts his body in a twist where he is unable to do his best.

In training he has to straps his hands to bar for repetitions but always does one rep. With each weight without this assistance to be sure he can handle it. Another science he has worked out is getting set and then blowing all air out of his lungs and lifting on empty lungs. He finds this shortens his leverage and adds many pounds to his lifts.

He has also tried rocking back and forth on the balls of his feet to start the lift by calf power. Bob is the most scientific deadlifter in the world.