Bob Peoples Training Routine For A Thick Back 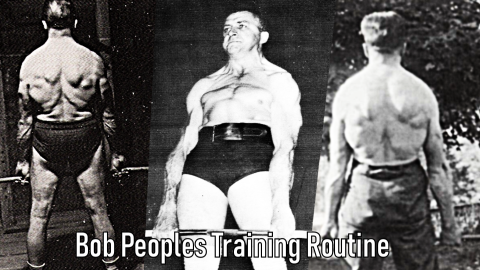 Bob Peoples was a farmer and trained after working 10-12 hours on the farm. He was a deadlift world record holder. His 700lb+ deadlift record stood for over 25 years!
He worked his balls off and he never said : “I’m taking it easy today, my CNS is wasted”. He was advocated of instinctive training. The secret of Bob’s training routine is low volume and he trained nearby to his maximum. Bob’s highest energy peak was in late afternoon. 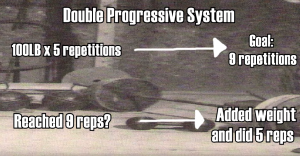 The first system he followed was the double progressive system. He took a given weight for example 100 pounds and did 5 reps. He tried increasing his rep range to 9. If he reached 9 reps he would have added weight and did with 5 repetition. It is easy for beginner to follow.

System he used in 80% of his training 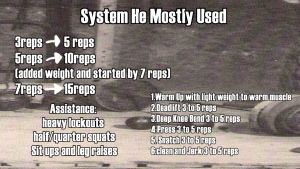 Another System that he followed in 80% of his training. He did not use the 7 to 15 very much. 15 reps are more for cardio and not strength. Sometimes he trained 4-5 times a week. When he got down to serious training, a routine of the following was used:

When he reached 5 reps he added more weight and started again. Along with this, he used to train heavy lockouts or half or quarter squats. Sit ups with weights he did too and some leg raises. Sometimes he added other exercises in his regular training: Chin ups, neck work, curls, toe rise 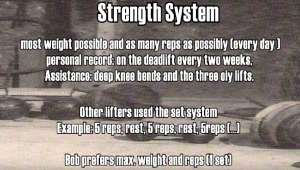 For strength he used usually the following system. He used the most weight possible and deadlifted for as many reps as he possibly could, every day. If the mood strike him he would try a personal record on the deadlift every two weeks. 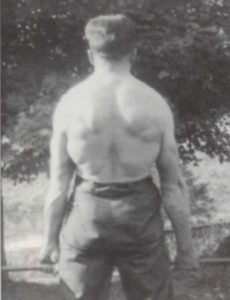 He said that another lifter used the set system and have built huge muscle and great strength. For Bob Peoples volume is boring. He did rather maximum weight and reps. He saw no advantage to lower the load and do more reps. It seemed waste of energy.

Thus this system was the fundamental development for his thickness in the back. But just remember, Bob was gifted. The average Joe would break or injury his back. I would recommend novices 5×5 or just another normal and boring training routine. 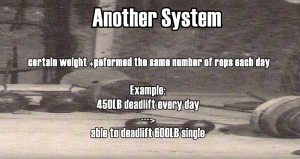 He used a certain weight and perfomred the same number of reps each day for about two weeks. He made great progress but it was difficult to increase the progress. Example if he could use 450lbs for deadlift each day for two weeks, he was good for about 600 pounds in a single deadlift.

But one day he stopped following this system.

Double progressive Bob’s Style
He used to take the deadlift from the rack at top side. He lowered to where he has the power and ability to pull out. Little by little lowered his weight about one inch. If you were able to deadlift to the bottom in full range with your weight you will might add weight and go the whole process again. According to Bob you can make progress.

Source
Book: Developing Physical Strength by Bob Peoples (worth to buy and read)