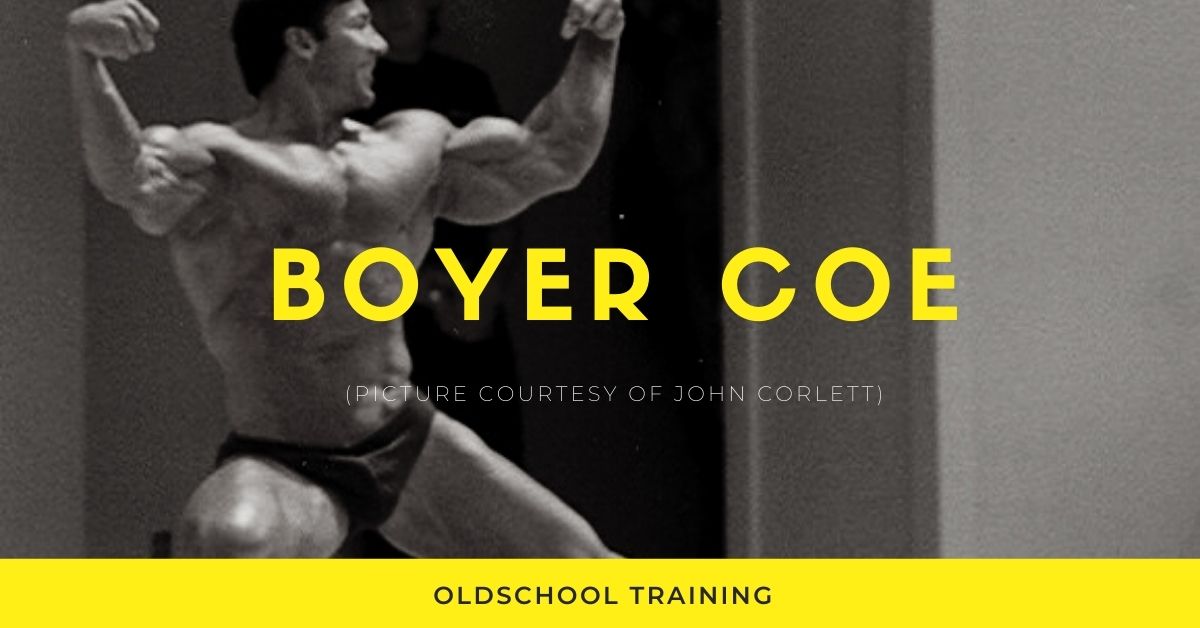 Boyer Coe was born in Lake Charles, Louisiana, on August 18, 1946. He started weight training at age fourteen at the Lake Charles Gym, where he often lifted in the cold under the light of a 100-watt bulb. As a boy he’d inform anyone who would listen that some day he would be Mr. America. At age seventeen he bench-pressed 420 pounds in strict style.

He attended college at Lafayette, Louisiana, and trained at Red Lerille’s gym, where he continued not only to improve his physique but also to perfect his posing. He worked out there for fourteen years before opening his own gym in New Orleans.

Boyer always found time to bring his fitness philosophy to others who could not come to him. He started a training program for the state prison in Louisiana and another for the children at the Louisiana State School for the Deaf.

A superstar of the 1970s, Coe also continued to be a formidable competitor in the 1980s. He brought home seven Grand Prix titles in 1981 alone. He was always a strong contender for the Mr. Olympia title and, after a decade-long hiatus from competition, stepped onstage in absolutely phenomenal condition at both the 1994 and 1995 Masters Olympia contests.

Monday 6 a.m – waist work
He concentrated on the waist first, because this is one of his top priorities; he felt that he needed abdominal work more than anything else. Also, it served to warm up the lower back. Since he has been doing waist work first he has avoided any injuries. Before, when he worked this area at the end of his lower workout he occasionally injured his back

First came seated twists to warm up the whole midsection area, including the lumbar region of the back. Done in an exaggerated style so as to rotate the whole torso, Boyer seemed to have no particular number of reps in mind here – he justs twisted until he felt the back is thoroughly warmed and the whole area stretched and ready for heavy work.

He considered this exercise very effective for bring out the abdominals. He used a strip of webbing to straps his hands out much quicker than your abs will.He pulled himself downward for a good stretch, then slowly raises his body to the  chest, tucks the knees in at thetop for a momentary cramp, then lowers the legs very slowly in a kind of negative resistance movement. Throughout the exercise he concentrated on his abs, always kept the tension on them during the full range of movement.

15 times he lowered and raised his thighs for the sets he combined in a sequence with bent-leg sit ups.

From the knee-ins he moved right on to sit ups, super setting two exercises for 3 sets.

He super setted regular standing calf raises with lying leg presses. The most important part of the calf movement is stretching.

He did 10 reps. He cites that weight is relative..

He warmed up with incline presses with a relatively light weight. He quickly moved into heavier work and Boyer positioned himself on the pec contractor (see above)..

Boyer: “Point of failure is very important here in work on the pec contractor, which I think effectively isolates the center of the chest. We begin with a good weight and go to failure, then we’ll reduce the weight somewhat and go to failure for antoher set. Then the weights is increased so that it is even more than we started out with, and we do negative reps as slowly as possible for 6 counts.”

-Heavy weight, shoot for failure in about 8 reps, immediately reduce the weight and go to failure again – this time in about 6 reps. Then more weight back on the bar and do 6 negative reps. These latter reps – the negative one – are particularly beneficial.

Boyer: “They really allow you to use an overload of weight on a muscle – something that you could not normally do in a positive manner. By increasing the weight and resisting it you work the muscle fibers much more intensely and that increases your strength.”

With the pec contractor-incline presses he super setted and moved on to vertical flyes.

He did 3 sets of dumbbell pullovers for 10 reps each set using a heavy weight.

At the end he did 3 sets of serratus pulls. 15 reps per set with a relatively heavy amount of weight.

Monday 9 p.m.
He started his session with the same waist work that he did in the morning (this is done every workout period). But tonight, rather than went on to calves and chest, he went into his Monday and Wednesday night leg and triceps routine.

Warmed up the thighs with 10-15 rep set of extensions. He added heavy weight on the machine. Reduced the weight about 20-30 pounds, he did another set to failure. Then a negative set, done by lowering the weight as slowly as possible to provide maximum resistance.

He moved to the hack squat machine and did about 10 – 12 reps. He used as much weight on the stack as he can handle properly.

He did leg curls with 3 sets. Two sets to failure, plus one negative set after adjusting the weight.

He started with heavy triceps extensions with the E-Z curl bar done on an incline bench in the set-to-failure. Reduced the weight for negative pattern of his workout, he supersetted the exercise with tricep pushdowns.

Then he did 3 sets of serratus pulls. He used to bring his Monday night’s workout to an end. It was 10:15 p.m.

After that, deltoids are first to be worked. He used to begin with some work on the traps – Boe cited that warmed up the whole shoulder area.

Deltoid shrugs got the routine off. He used the decline weight approach, he began with a fairly good set of dumbbells. Then after the first set of 15 reps, he took a 10lb lighter dumbbell for another set – and so on – for four sets.

Boyer: “I try to do the reps as slowly as possible. I gradually raised the traps up and back, cramp them together, hold them there momentarily, then slowly lower the dumbbell. A steady slow movement is very important in realizing the full benefit of this exercise.”

He began with the laterals, Boyer leaned forward put the stress where it belonged, then raised the weight slowly.

He worked to failure, dropped the weight, did another set to failure, took a heavier dumbbell and finished off with a set of negatives. He did 7 reps.

Immediately he moved on to the rear deltoid machine..

Boyer: “It is very important to peform the exercise on the machine properly. You must sit very erect and pull the handles as far back as you can, arching your back, and cramping the rear deltoid area.”

– 2 sets of failure with reuction of weight between the sets

After recovering he moved on to front lateral barbell raises, which he supersetted with seated barbell front presses.

Then he did then his usual three sets of serratus pulls.

In this evening he will hit back and biceps.
After twists, knee-ins and sit ups he moved right in to chins.
A little wider than shoulder width. Lifted himself so that the bar hitted him at chest level. He dropped down and stretched jimself as low as possible. No particular number of reps are involved..

Boyer: “I just go until I can’t do anymore.” Then he reduced the weight and he did another set. He tried doing 3 sets

After chins he did barbell rows and pulley rows. Used a medium grip, Boyer pulled the heavy barbell to him that he is using for his first rows, held it at the chest just below the pecs momentarily, then lowered it for a full contraction. This range of movement, he has found, really gave the center of the back a good workout.

Pulley rows: also worked the center section to a degree, but it really burned the lower back.

He finished his night routine with biceps exercises: preacher curls, done to failure with a heavy barbell. After recovering he quickly moved right on the curl machine. Loaded with heavy weight. Here he finished off his biceps work with several negative reps..

On Wednesday he would begin all over again with the routine he started on Monday morning. After working out on Monday, Tuesday, Wednesday and Thursday he will take Friday, Saturday and Sunday off.

What is the “real secret” of body building success?

Boyer Coe: “At the most basic level, there are no real secrets, although it’s only human nature for young bodybuilders to think that there are. You must work hard and apply 100% effort 100% of the time. Hard work is something that 99% of the people in the world shy away from. If something proves to be the least bit difficult to achieve, they immediately give up. The man or woman who doesn’t give up, who goes on despite something being difficult to achieve, always comes out on top. Over and above all this I am a firm believer in a positive mental approach to bodybuilding. I believe in the old proverb, ‘Whatever can be conceived and believed can be achieved.’ The body holds true to whatever course the mind sets as a future reality. Believing in yourself and being able to clearly visualize what you will soon become are the keys to bodybuilding success.”

Boyer Coe credits his parents with instilling in him the basic value of hard work and perseverance. At home he learned, by example, not only the value of self-discipline but also how to set and meet personal goals. This substantiates a claim that Arnold Schwarzenegger has made of many champion bodybuilders – that they had disciplined early lives. “If you think that winning a major contest will make major changes in your life, you will end up very frustrated,” said Boyer’s father. “You’ve got to do things for yourself first.” His father’s primary focus was on Boyer’s education, but he supported his son’s desire to excel in bodybuilding and even accompanied him to many of his early regional contests.

Setting personal goals continues to be central to Coe’s philosophy of living. “If you believe you will be the champion, then you have the battle half won,” says Boyer.

“I feel fortunate for the experience bodybuilding has given me,” he says. “Now I would like to put something back into the sport. I take every opportunity to talk before different civic groups, explaining bodybuilding and its benefits. It has come a long way since I started”.

Boyer still starts early every morning at the gym. He doesn’t have to train anymore. He trains for the same reason he did back in Lake Charles when he was fourteen-years-old and for the nearly half-century that followed, because he loves to. As the four time Mr. Universe says with a laugh, “Old habits die hard.”