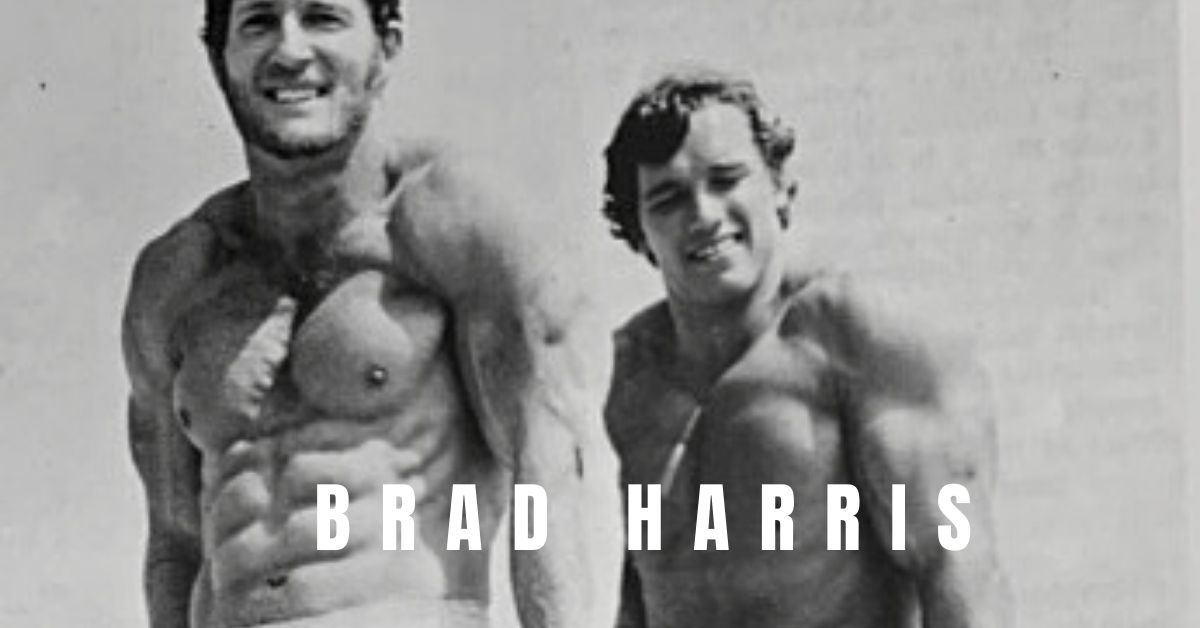 Bradford Harris was an American actor and stuntman. He appeared in a variety of roles in over 50 films, mostly in European productions.
That movie star met and trained with Arnold Schwarzenegger!

Arnold once said if Brad Harris decided to train for bodybuilding contests he would be a WORLD BEATER. Bred was a kind of idol of him. He was involved in a very lucrative film career in Europe and you could say that Bred was kind of a movie star to Arnold.

Bred Harris: “Arnold did once tell me that I was a great inspiration to him, but strangely enough I’ve never had any interest in physique competition. If I had been interested then I would have done it.”

Bred was born in St. Anthony, Idaho, his family moved to California, where he attended Burbank High School. In High School he started training and then received an athletic scholarship to UCLA where he studied economics. When he injured his knee playing football he was advised to take up weightlifting to strengthen the injury that developed his interest in lifting weights.

He did not any super sets. He trained for 30 years and during that time he has used every type of system that’s ever been conceived. Heavy weights and low reps, light weights and high reps. He just used what was suitable to him and what gave him the best results.

Reps/Sets
He was not training to get bigger or super defined, he did 6 to 9 sets per bodypart and 12 reps per set. For triceps he would usually use 3 different exercises for 3 sets each using 12 reps each set.

Thus Bred Harris did not do any leg work in the gym. He liked to get his leg exercise from tennis, running and basketball. He found that training his legs with weights gave him the kind of development that was unsuitable for these type of sports. His legs were very strong and powerful. He did not enter physique contests he he did not see the need to develop legs.

He used to run on the sands, the hills and sometimes on a track. It just depended on where he was at the time. He carried everything he needed for training in the back of his car. So whenever he got a few minutes free he just dressed and went out and did it!

Diet
He used to wake up at about 7 a.m. in the morning, because he liked to catch some news programmes on television. While he watched he liked to have some breakfast which usually consisted of either fresh grapfruit or fresh orange, so that he made certain he got his natural ‘C’ from the citrus fruits.

Then he had his hi-protein shake, which was a combination of natural yogurt, honey, nuts, protein powder, raw wheat germ, maybe an egg, fruit and some milk.

Protein Powder Bred preferred
That were various kinds of protein powders that he used from time to time but he mainly used a milk and egg type and usually a milk and egg plus fibre. He also took a handful of a wide variety of vitamins and minerals included B “Complex”, ‘C’, Iron, Multi Vits an so on.

He used to eat very well balanced meals. He did not eat sugar nor did he eat high cholesterol type foods. He did not eat red meat because he lost appetite for it. He preferred fish, turkey and chicken. Basically these foods are rounded out with nuts, grains, fresh fruits and fresh vegetables and that’s it really.

Evening Meal
Sometimes during afternoon he may had a little cheese and fruit. And a very small snack. And sometimes he had a mixed salad with vinegar dressing, some caught on the day fish, or chicken or turkey cooked in various kinds of fruits.

He loved to run and treated his running program equal to his lifting. He was healthy and vibrant till the end. Bred’s daughter said her dad lived by motto, “Stay fit. Have fun. Harm no one.”

In 2015 he was awarded the University of Arizona College of Humanities’ Distinguished Lifetime Achievement Award in the Humanities.