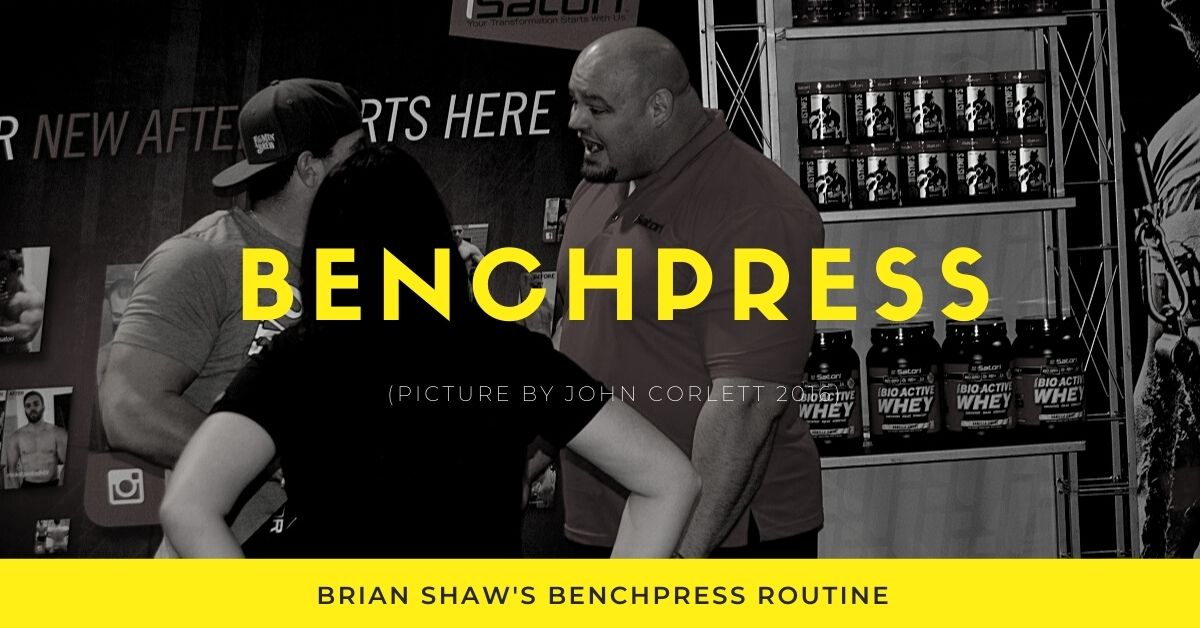 Brian Shaw is the most prolific U.S. Strongman, currently with 4 world strongest man titles under his belt as well as 3 Arnold Classic Strongman wins. In 2020, Brian began showcasing on YouTube the building of his new residence in Colorado with a focus on the incredible home gym he has earned through blood, sweat, tears, anesthesia, and co-payments. With the pandemic of the COVID virus shutting down the entire world- to include Strongman contests, Brian decided to switch gears and focus on his bench press for a 12 week period. I am somewhat bias, but I believe that Brian made a great choice in deciding to hire Josh Bryant as his coach.

I began training with Josh when he was a teenager. If you listen to the latest Underground Podcast with Pete Rubish from June 19, 2020, you can hear Josh describe our years training together. I learned much from him as apparently he did from me.

Standing on the Shoulders of Giants
Before today’s Strongman giants like Eddie Hall, Thor Bjornsson, Robert Oberst and Brian himself, there were physical culture icons such as Paul Anderson, Anthony Ditillo and Big Jim Williams who blazed a path of incredible strength. Myself and Josh Bryant have always been students of the game, as has Brian. If you saw the Television Show the Strongest Man who ever lived, you got to watch Brian at Paul Anderson’s house and gym in Georgia- as well as the reverence that Mr. Shaw has for his strength forefathers.

Anderson, Williams, and Ditillo had no coaches, no franchise gyms, few written training materials and definitely no online coaching or internet/ social media to connect with the strength stars of yesteryear. They had to become their own instinctive coaches, building their own gyms and training systems. All were open minded, dedicated and inquisitive as to what they needed to do to develop their own strength. Thankfully all three wrote down their discoveries to share with the strength world their knowledge- to give back to the iron game in the true spirit of physical culture. 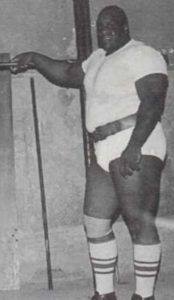 While incarcerated, Big Jim discovered that benching every day with a high level of intensity mixed with low volume increased his bench exponentially. Like Brian Shaw, Jim was no one trick pony as he held the world record in the squat with an 860lb effort as documented in Ironman Magazine in 1972. In a 1993 Powerlifting USA Magazine article Jim defended his need for daily benching by saying what a mess the world would be if football players, carpenters, and surgeons only applied their skills infrequently. As documented in the March 1971 Ironman Magazine, Jim held the world record in the bench at 660lbs. 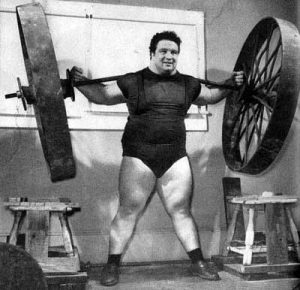 Paul Anderson, the Father of American Weightlifting, was documented in the May 1976 Ironman Magazine as using assistance exercises such as handstand push-ups and heavy dumbbell benching to make him strong enough to bench press 600lbs. This sounds quite similar to Brian Shaw’s and Josh Bryant’s conjugate style of training as we shall soon discuss.

Anthony Ditillo was a long time author for Ironman and Milo Magazines- as well as a self described bulk fanatic. Long before we all came to know CT Fletcher, Anthony wrote two amazing training books which emphasized power rack training and isometric work to build size and strength. A 2002 PLUSA Magazine article described how Anthony’s system allowed him to strictly bench 405lbs with a pause.

Now back to present day:

On March 24, 2020, Brian released a YouTube video entitled “The road to 701.” This title was a friendly dig against Eddie Hall, who posted a road to 700 bench YouTube series as well but it stopped due to injury, limited gym access due to COVID, and finally Thor’s boxing challenge. Brian and his long time training partner Tyler began this video series by sharing their bench press workout with the world. All of their warmups on the bench press are shown, with this week 1 culminating in Brian benching 470 lbs for three strict repetitions. Brian and Tyler obviously have known and trained together for years and they provide an entertaining experience for the viewer with their light hearted banter. This video series also highlights the amazing home gym Brian has created, at a time when many wish they had a home training facility as gyms around the world have remained closed.

Following Brian’s top bench work set, he and Tyler are programmed to do a superset of a 6 second isometric bench in the power rack against pins, followed,by a triple in the bench with approximately 80% of their maximum. Brian details in the video how these supersets have different levels in the power rack, chest, mid-point, and at lockout. Next up for the workout is Brian doing seal rows on a raised benchpress. Brian uses a set of dumbbells which allow him to get the fullest range of motion while pulling the bells up with a parallel grip. Flat bench dumbbell presses with the 170lb dumbbells for 2 sets of 6 reps. DB flies on the floor are next, with 3 sets of 15 reps being employed so that Brian could get the greatest range of motion possible.

Standing dumbbell hammer curls, four sets of 8 continued Brian and Tyler’s training on this date. The dynamic duo next does dumbbell floor tricep extensions for 5 sets of 12 repetitions.

On March 31, 2020, Brian released the second video in this series of his following Josh Bryant’s program while Brian is focused on improving his bench press. The video is entitled “485 lb bench for reps/Road to 701lbs.” Brian begins the video by describing how his new training program under Josh is going to provide him with so many opportunities to grow and improve. Josh ended up calling into the gym via FaceTime so that he could critique Brian’s bench form. Brian humbly stated that he is no expert when it comes to bench technique that is why he has hired Josh as a coach. Josh corrects Brian’s head position when he is on the bench, directing Brian to not lift his head off the bench as he lowers the bar. By forcing your head into the bench as you press, a lifter is able to have the tightest upper back possible.

Tyler engaged in a set of 420 for repetitions. Brian worked up to 485, which he did for 3 straight pauses. After this set, Brian works in 6 sets of 3 repetitions with 430lbs- which he does following a 6 second isometric in the power rack at various positions. Brian and Tyler employ compensatory acceleration when they press, a concept made famous by Josh’s mentor, the late great Frederick Hatfield. Brian then completes 4 sets of 7 seal rows- a Josh Bryant staple for upper back muscle building as well as effectively providing traction to the shoulder joints following heavy benching. Strict flat dumbbell benching with a slight pause and elbows out to the side was next accomplished with 170lbs for 2 sets of 6 repetitions. Brian’s form is always textbook and he never misses a rep. The remaining assistance work completed was 5 sets of 12 flyes on the floor, hammer curls, and dumbbell triceps extensions on the floor.

On April 6, 2020, Brian uploaded a video called 500lbs bench press. Brian begins the video by saying that he wants to focus on doing pause bench presses because he may eventually decide to enter a bench press contest. Brian works up to a triple with 500lbs, then follows that up with superset of isometric benches in the power rack paired with compensatory flat benches.

Brian and Tyler placed a scale under the bench for their isometric sets and had a friendly competition with who could generate the most force during their respective 6 second isometric contractions. Josh’s clients are so successful because their training is smart, productive and fun. Assistance work is dumbbell seal rows, dumbbell flat benches, floor dumbbell flyes, standing hammer curls and floor dumbbell tricep extensions. The video ends with Brian’s always positive message to go out and be great as well as most muscular pose by Brian which exhibits the high level of muscular development he has obtained.

Brian uploaded a video on April 13, 2020, in which he narrates that the workout this week is going to be a reload week. During his reload Brian proceeds to bench 405 for 3 sets of 5. Brian’s training videos are always so informative because he will speak his mind as to how he feels while he trains, what his mindset is and he is always talking about setting goals and being competitive with himself.

I do not want to ruin the surprise for any readers out there but Brian posts weekly bench workout videos all with Josh’s programming and the results have to be seen to be believed. My words do not do them justice. Suffice it to say, if you take the time to watch the bench video series that began in March and culminated in mid- June, I believe you will be educated, inspired and highly entertained by Brian’s effort, personality and training partner.