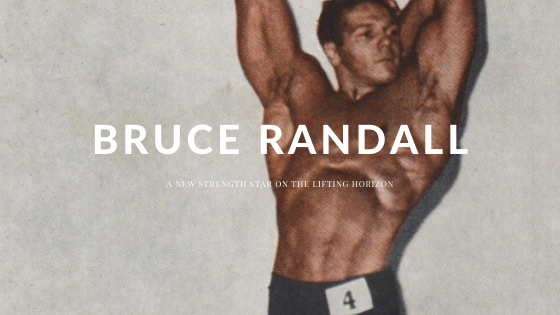 “Big Bruce Randall started weight training at the Naval Air Station Gym in Norfolk,Virgin, January 2, 1953. He is in the Marine Corps and is assigned to the station. He had never used weights before last year and weighed 203 pounds at the start. In one year’s time he “bulked-up” 110 pounds! 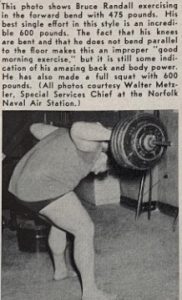 Bruce handles such tremendous weight we’ve had to strengthen our equipment at the N.A.S gym. In his short acquaintance with the quarter squat he moved up so fast in poundage that we ran out of weight and a bar big enough to hold it. In addition he broke a pair of squat stands. Before he finished, or rather before the equipment gave out, Bruce worked up to 1,010 along with powerhouse 198-pound lifter Steve Massios.

Bruce’s bodyweight as this is written in March is 325 and he has a schedule worked out in which he plans to “bulk-up” to 350 by the time of the national jr. AAU championships in Norfolk in May, and to 400 before he enters college in September.

Some of his best strength feats so far a single press on bench with a pair of 200 pound dumbbells a clean (pulling the weight up as he falls back) and press on inclined bench (45 degree) with 370 pound barbell, a forward bend with 600 pounds, full squat with 600 pounds (although he has practiced the squat on only a few occasions), dead lift 590, press overhead from stands with 325 and a jerk overhead from stands with 370.

In December of 1953 he entered his first contest, the Capital District meet, and although he had not practiced the three lifts made 300 press, 230 snatch and 315 clean and jerk to total 845. The snatch was done with a high pull and with a high pull and little split; the jerk was a push-press. At the Tidewater meet in February, still without three-lift training, he made 300-240-325 for 865. When he attains the bodyweight he has set as his goal, Bruce plans to specialize on the standard Olympic lifts.

Bruce was a tackle in high school football and made the second All-County team of Weschester County, N.Y. He has put the 16-pound shot 50 feet, 9 3/4 inches. He has good athletic ability and is very fast on his feet for a big man. He has run 100 yards in 11 seconds.