Big Bruno Sammartino, the amicable Pittsburgh giant, was born in Italy. Shortly before the outbreak of World War Two his father came to America, planning to find employment and then send for his ample family. But the war erupted, and it was not until 1949 that the Sammartinos were all reunited and in their adopted land.

Privations and near starvation were Bruno’s lot during the terrible war years in the ravaged Italian hills.

At times Bruno, his mother, brothers and sisters were forced to eat grass in order to keep body and soul united. Three of his brothers and sisters perished under these conditions. His own survival points to the fact that young Sammartino inherited a marvelous constitution.

Although his mother if of average size, his father, a retired blacksmith, is a powerfully built, stocky man whose wrists exceed even Bruno’s massive 9 1/2 inch measurement. And his paternal grandfather stood 6 feet 5 inches and weighed 300 pounds.

From the first days of his weight-training experience Bruno Summartino’s goal was to develop superabundant strength and power. The more he trained, the bigger he grew, and the bigger he got, the more his power increased.

By the time he was graduated from Schenley High School he had more than doubled his bodyweight as a freshman.

Most of his training, then as in the future, was done in the well-equipped weight room at the East Liberty Y.M.H.A. The time and energy he devoted to his workouts didn’t allow too much time for other activities, but the agile strongman practiced a great deal of wrestling while in high school and frequently worked out with the wrestling squad at the Univerity of Pittsburgh. The coach there offered him a scholarship, but Bruno turned it down in order an apprecntice carpenter for a number of years. 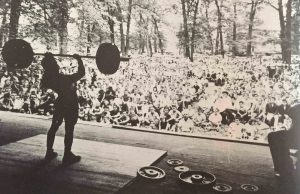 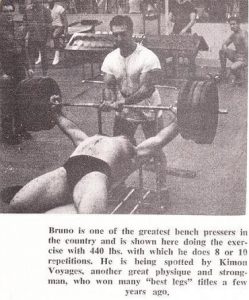 He used to work genererally a six-day week on construction projects. Thus his workouts were restricted to two or three days a week. When possible, these sessions in the gym lasted as long as five hours and it wans’t a case where a good deal of the time was spent resting or batting the breeze with training mates. 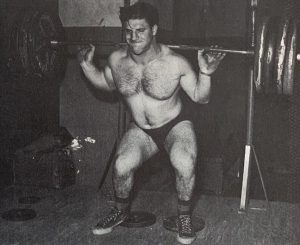 Exepet for the time needed for travel, his wrestling career allowed more time for training. Bruno liked to work, liked to sweat. He believed in many sets of the basic exercises are shown in the photos.

As this stage of his career Bruno didn’t bother with a rigid course schedule, preferring to vary his workout tu suit his mood and immediate goals. You can bet that he managed to get in at least several sets of bench presses, curls, squats, deadlifts, and a variety of dumbbell work during each training period.

Bruno employed heavy poundages in all of his movements. Unlike too many of the present day strongmen who specialize in the so-called “odd” lifts, Bruno is not afraid to show what he can do in public in open competition. He has entered and won a number of power lift contests. As far as the Olympic lifts are concerned, his best performance has been, as one might expect, in the two hands press.

At one time Bruno considered taking a fling at professional boxing. Several local heavyweight pugilists suggested in public that the weightlifting giant was “musclebound” and implied that he couldn’t do a thing with his muscles other than lifts weights.

A short time later in a New York boxing gym, Bruno worked in the ring against Sonny Liston, one of the country’s leading heavyweight maulers.

It took weeks before the big Italian boy’s cuts healed. He told his grandsons that one of the most dangerous sluggers of the times could not put him down. Exit thoughts of the prize ring! The promoters who were auditioning Bruno advised him against boxing for several reasons, among which was the fact that they considered his chest too big.

At age 22, he turned to professional wrestling. The first step was not an easy one for him because he was still unknown and could not get the big money bouts. Then he got a break and wrestled for the Canadian Heavyweight Championship, which he won.

Then he was on his way. He owned the title two years and gave it up when he became World Champ in 1963, defeated Buddy Bodgers. He held the World Championship title for eight years.

1963 – 1971 during those years he not only wrestled in the United States and Canada, but places such as South Africa, India, Japan, Australia, New Guinea, Tasmania, Europe and China.

One of the biggest thrills of his life was when he wrestled Haystack Galhoun when he weighed 605lb and lifted him above his head and body-slammed him to the mat.

Paul Anderson also tried to Haystack but failed! This gave him much confidence in his strength and ability.

Some of the records he has setted are as followed: He had 133 consecutive sell outs in Madison Square Garden. He held the record for 21 straight sell-outs in Australia and the largest crowd in Japan 190,000 peope setted the all time record of 125.000 in India- He was the only pro wrestler to sell out the Bull Fight Arenia in Caracas, Venezuela. 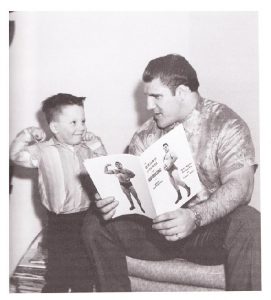 Bruno published a book about training and wrestling. Jan Dellinger (worked with John Grimek) made a short review.

Jan Dellinger: “Speaking of low benches, and benches made out of wood, apparently in the early 1960s and prior, lifters thought both readily acceptable. The first exercise course involving a barbell I was exposed to was the Bruno Sammartino Bodybuilding Course, which was  sold during the aforementioned period of time. One of the very unique things about this course was its inclusion of schematic instruction to build your own bench press and squat stands out of wood. I bring this up to mention that Bruno’s diagramed bench was a mere 6 or 8 inches (I forget which) high, and the construction material involved was wood!  ”

Bruno’s personal habits were moderate and he kept a good body builder’s  diet. He did not smoke. In spite of his irregular hours he tried to get all the sleep he can. He used to eat plents of meat, fresh fruit and vegetables and tried stayed completely away from any form of sugar, cakes or desserts.

Starch, too, was out as much as possible. He said. that in the past he used to drink large quantities of milk in an attempt to bulk up and gain weight rapidly, but he had cutted milk out completely because of the many article he has read denouncing the exccess cholersterol caused by consumption of animal fats. He also found that drinking milk made him sluggish in the ring. He walked a great deal, which he believed improved his endurance.

Although he did not drink strong alcoholic beverages, he admitted to liking an occasional glass of beer or two, particularly in summer.

On one occasion he shyly confided that he drank a “huge quantitiy” of beer – six whole bottles!

By early 1957 he weighed 285lb. Even moreamazing than his rapid growth of muscularity was the growth of his bone structure. His wrist went from 6 1/2 inches just a shade under 10 inches. Here is a chart of his comparative measurements.

Sammartino underwent heart surgery in 2011. He died on April 18, 2018, at the age of 82 from multiple organ failure due to heart problems.

Editor’s note: Do you want to read more about Bruno or his role model John Grimek? Then use the below tag system for more articles – Mr. Berg