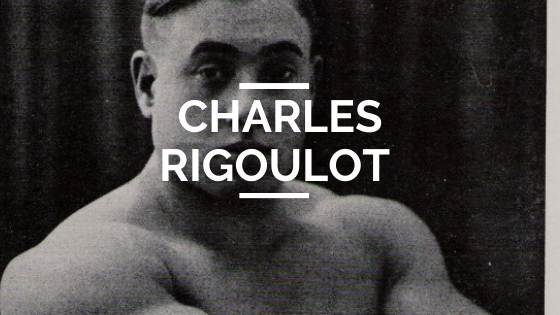 Charles Rigoulot was born in 1903, at Vesinet (near Paris), France. His father and grandfather, butchers by trade, were extremely vigorous. Charles was a tough and robust lad, a scrapper, and parents of his victims during school days used to complain to the Rigoulot family. At nine he was leader of a youthful gang engaged in street warfare.

Later, he became apprenticed as a printer and part of his job entailed carrying heavy lithograph stones; due to his obvious strength (he was 16 years old) he attracted considerable attention.

Charles was very fond of athletics and he joined the Sporting-Club de Paris. He practiced running ad jumping and specialized in football, a game at which he was considered a powerful and dangerous player.

One of his club mates was very much impressed with Rigoulot’s strength and prevailed on him to accept an invitation to visit the gymnasium of Armand Saulnier, a well known trainer. He was reluctant to use the weights but after some persuasion he made a few attempts which were very good – even for a novice.

The following information has been obtained from a letter written by Cayeux in 1950. According to him Charles Rigoulot trained not very regular. He had in his life many personal troubles, which did not permit him to lead a life of calm so necessary to a champion.

Rigoulot would decide, 8 days, 2 months, or 3 months in advance, the date and the hour in which he would make a record; he never failed to keep his promise. He always had at hand one or two records that he could make without previous training, such as swing, jerk or snatch with dumbbell.

Charles Rigoulot: “I have my particular method of training. I train when I feel like it, then I am unfettered. I do not force myself when there is no need for it. I have never tied myself down to specialized training. If I am to be in competition I train seriously and if I have no competition in view my training is haphazard.”

Rigoulot practiced very little pressing, believing that it detracted from his lifting speed.

Sometimes he included running and jumping. His eating habits were as simple as his training; when not in training his appetite was not unusual, “nothing to do to eat” was Rigoulot’s explanation.

When in training his caloric demands increased and the replacement of cells from proteins was greater, therefore, he ate with gusto such things as rare beefsteaks and suffered no digestive disturbances. He adhered to no special diet. 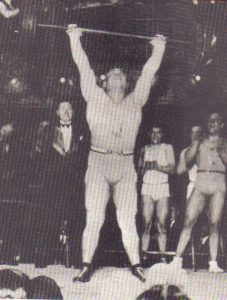 On March 3, 1930, Rigoulot displayed his unusual power in a most unique manner. Before 6,000 spectators in Wagram Hall, Paris, Rigoulot did a two arm cleaned and jerk with the famous Apollon bar, said to weight 365 pounds. The Apollon bar is a set of iron wheels on a thick axle, from a railroad car.

For a man who could jerk more than 400 pounds the difficulty was mainly in cleaning the bar because the axle is so thick.

Rigoulot trained on the bar for several weeks before he attempted to do it in public.

After retiring from weightlifting Charles Rigoulot went in for wrestling and automobile racing. In 1953 he became sports director at the Cognac Distillery Ricard.

Strength & Health magazine reported Charles Rigoulot had become a casualty in a battle at the beginning of World War II, but the report proved untrue. However, he did spend time in a concentration camp for striking a German officer. Sadly, it was not WW II, but a battle with cancer that took his life in 1962, at age 58. His daughter Dany Rigoulot became an Olympic figure skater. 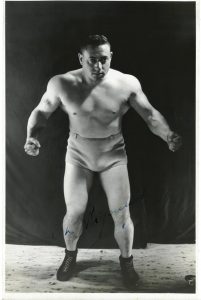