Chuck Sipes was the real bodybuilding hero. He was Mr. America, Mr. Universe, and Mr. World. He was not only a bodybuilder; Chuck Sipes was also a role model. He changed, helped, and shaped the lives of troubled men and youngsters.

Chuck Sipes’ story
He was born on August 22, 1932, in Sterling, Illinois. As a youngster, Chuck wanted to gain weight for football. Thus, everyday, he did basic exercises: squats, bench presses, deadlifts, and military presses. He made rapid progress, and he decided to buy some strength magazines.

He saw the photos of Steve Reeves, Jack Dellinger, and Reg Park. These legends inspired Chuck to train harder and become better. He had the idea to build his own gym, but his living room did not have enough space for the equipment. Thus, he asked his father to turn the garage into a gym.

Luckily, he was allowed to realise his plan. His first step was to build some rugged benches out of heavy timber. Chuck’s gym consisted of an incline bench, a sit-up board, a press bench, and some basic iron. He had no fancy stuff and was not sponsored for his effort.

He even used the parallel bars and horizontal bars at school to train his upper body. Early in the morning, Chuck used to bike to school. At around 7 AM, he trained on the horizontal and parallel bars. He was also disciplined during lunch hour. While other students were eating junk food, smoking, and wasting time, Chuck used to run to the local stores and buy bread and milk for power!

Time passed, and Chuck made the varsity football squad, and he gained many honors.

Norm Komich was a friend of Chuck Sipes, and he wrote some remarkable stories about him. According to Norm, “We were very anxious to see Chuck’s famous home gym, and we headed for the garage. I cannot tell you the shock we experienced when we saw the basic and crude setup he had. The primary piece was a wooden power rack. He explained that he had learned of the overload method in Montreal, and he did a lot of partial movements on the rack. He had a no-name Olympic bar, and he went to the local trainyard and got some old train car wheels to use for the extra weight in the overloads. I’m sorry I did not ever ask exactly how much weight he used. He had a solid bench, and a couple of big, solid dumbbells—I’d guess over 50 pounds—and folks, that was it! No lateral machine, no squat racks because he used the power rack, no dumbbell rack, no nothing! The only other piece he had were two nylon straps set wide apart on the rafters, which he would hang from and stretch his lats, but that was it. It was the ultimate example of making the most of what you have. This was 1969, so he had trained for the ‘68 Mr. World in this gym. He did have some friends who trained with him, but none were big names, just local people. Consider the equipment and atmosphere with other nationally ranked competitors at the original Gold’s or Vince’s or Bill Pearl’s, and then look at what Chuck achieved in this Spartan facility, and his uniqueness is even further verified.” 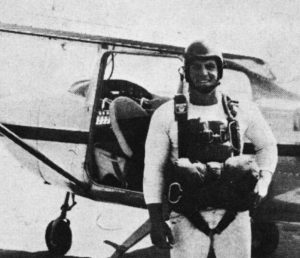 After high school, he didn’t really know what he wanted to do with his life, but he was looking for adventure, so he enlisted as a paratrooper. For three years, he was a member of the 82nd Airborne, an elite division noted for hard physical training, which, at that time, was also the President’s honor guard. That was when he met Mary, the love of his life.

Norm Komich: “Regarding Chuck’s military service, he told me that as a paratrooper in the Army, he was doing a jump one day in which he and a bunch of other guys jumped out together like they do in the movies and his chute got tangled up and he was descending far faster than normal (he didn’t comment on whether or not he had a reserve chute) and as he descended, he literally “ran into” one of his buddies who grabbed hold of him. Now there were two men under the one good chute and they were coming down much faster than normal plus they couldn’t perform the normal “landing” so they hit hard and Chuck got some injuries for which he was receiving some sort of “disability” pay. Now remember he was in his late teens or early twenties and he had been training since his young teens. So he described going into this military medical facility for a “check up” on his injuries and when he took his shirt off, the doctor freaked out and hollered “You’re DISABLED???” and they quit paying him. Today, Arnold has made a great build a household concept but back in the 50’s there weren’t a lot of men with that kind of physique so one can only imagine what that doctor thought.”

After discharging from the service, he went to school at Modesto Junior College, where he played a couple more years of football before deciding to open his own gym in town. At that time, his friend Bill Pearl lived in Sacramento. Since he trained some outstanding talent and had been successful in the gym business, Bill helped Chuck make a living with his gym.

Chuck raised three daughters: Daphne (born 1954), Kathy (born 1955), and Patricia (born 1962). During this time, he decided to get into youth work. He left the gym business and began to work in the toughest institution in the state, Preston.

It was an uphill battle for Chuck to get anything done in the California Youth Authority. In 1969, he was struggling just to get permission from the CYA to start a bodybuilding club, in which he would provide equipment for the kids to work out with. He was not getting a lot of support, so he asked his friend Norm Komich if he would put on his Air Force uniform and come with him to meet with the director to pitch Chuck’s suggestion for the club.

His friend listened to Chuck’s enthusiastic presentation, and then the director’s laundry list of why he could not support it e.g., (money and liability). So, at this point, Norm chimed and told the director that there were literally thousands of young men around the world who were eagerly looking forward to each month’s bodybuilding magazine, just so they could read about Chuck Sipes and his suggestions for training, and that Chuck had travelled around the world as an ambassador of bodybuilding, yet the director had him live and anxious to provide the same knowledge for free!

The director responded, “Well, I guess it would be like having Willie Mays as the groundskeeper for the local Little League,” but he still would not back Chuck.

Norm was ready to explode, but Chuck was always a humble and patient man, and he accepted the lack of support.

However, he kept trying, and eventually someone came along who was willing to acknowledge what a resource he was, and Chuck achieved his dream of having a bodybuilding club and giving out “#300” bench t-shirts for those who achieved it.

Norm Komich reflects, “A while ago, I received an email from a man in Oakland, California, who told me the following story. He was an avid mountain climber, and he had just finished a climb to the top of a mountain in the Sierra Nevada range, and he was sitting there, exhilarated after completing the climb and taking in the beautiful view. He was also enjoying the solitude of just him and nature, and so he was a little disappointed when he saw two figures below, approaching the summit that he was on. The two eventually made it to the top, where he was; the first to arrive was Chuck Sipes, wearing a red cap, and the writer described him as ‘the most muscular man he had ever seen’. The second was a young man, just out of adolescence. They introduced themselves to the writer, and then the young man said, ‘Don’t you remember me, Judge?’ The writer was a judge in the juvenile courts, and he had sentenced this young man to the California Youth Authority for some major infraction. The young man was fortunate enough to get into Chuck’s Outward-Bound rehab program, in which Chuck took juvenile delinquents into the mountains for a month. After taking part in this program, every one of the youths was eventually released and never committed a repeat offense. It was a commendable record.

So on this mountain top, fate had brought together a Judge, a juvenile and Chuck. When the youth asked him that question, the Judge looked at him closely and eventually remembered him. The Judge was thoroughly impressed at his change into this clean cut, fit, nature appreciating youth and when he asked about the transformation, he was told about Chuck Sipes and his work with wayward young people. The Judge never saw Chuck again; they exchanged some correspondence but then lost touch. However, the Judge never forgot how impressed he was with Chuck and so many years later he Googled Chuck’s name and my email came up and that was how he contacted me. Chuck was so humble and yet he had such an impact on every person he ever met. What a GREAT legacy.” 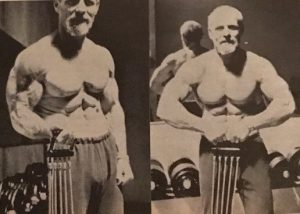 The above picture is Chuck Sipes in his 50s. He never stopped working out and being active. He trained continually because he loved it, and he loved the results of looking and feeling good. He was a true Mr. America. He was always in great shape. He took part in many outdoor activities (e.g., hiking, backpacking, and mountain-climbing), but he also used to paint, scuba-dive, black-powder shoot, trap, hand-craft leather goods, fly-fish and play the banjo! He also built a marvellous library for himself over the years. He never began any new hobby without first reading up on it.

Chuck pursued several careers, including gym owner and lumberjack, during which time, he and Clint Walker’s brother hit the weights on their lunch break between cutting logs! However, he eventually settled into a career with the California Youth Authority. He dedicated his life to teaching the healthy habit of weightlifting to youths. Chuck changed hundreds of lives.

Chuck had problems with depression, which resulted in an unsuccessful suicide attempt, and then a successful one. Chuck was buried on February 27, 1993, in Jackson, California.