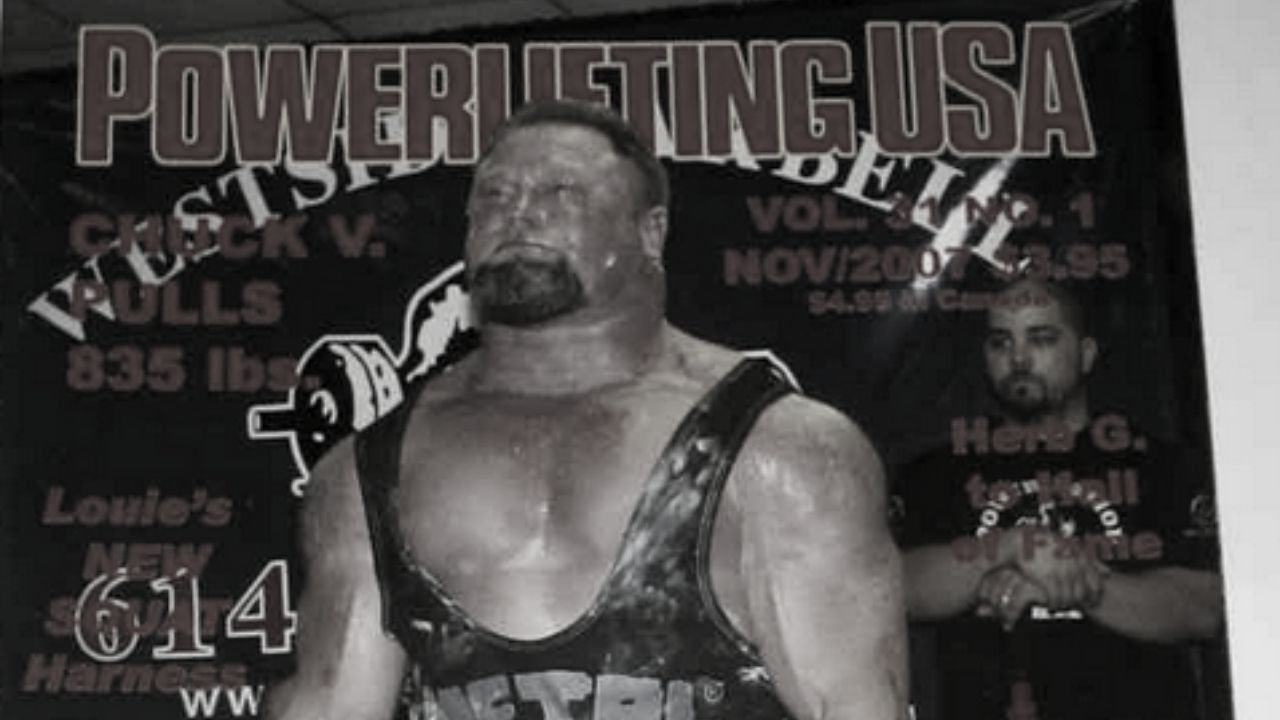 Chuck was a National champion by the late 1980s, a World Champion in 1995 but injuries kept him from fully realizing his potential until the early 2000s and once professional meets with prize money and championship belts were created in the mid 2000s, Chuck entered the zenith of his career.

Chuck is known for his incredible squatting prowess, but as Louie says it is improving your weakest lift will make you a champion. There is a video on YouTube entitled Chuck Vogelpohl 633 bench at the 2006 Arnold Classic which shows what an incredible strength athlete Chuck is. His bench presses, including his final one of 633 were all done as strictly as any shirted bench press I have ever seen. Chuck has had numerous upper body injuries to overcome to include a broken neck which caused severe nerve issues in his upper body. None the less, Chuck overcame these potentially debilitating injuries to win the WPO by being incredible at each of the three powerlifts. Chuck squatted 1118 and deadlift after his 633 bench to total 2506.

Another YouTube clip shows Chuck squatting the all time world record of 1110 lbs in the 242 lb class. This video shows how gritty Chuck was on the platform.
During one of the wonderful Dave Tate Tableltalk podcasts on YouTube, Renowned strength coach and former Westside Barbell lifter said that he had seen Chuck miss a weight in the gym, go up in weight and he would smash the greater weight for a triple. Jim says: “Chuck was serial killer intense” and he had “ a reverence for that place (Westside Barbell).”

Dave Tate has said during multiple YouTube videos that Chuck was always the first person in the gym setting the lift of the day up and he was the last person to leave the gym, in order to make sure that everything was put away and cleaned up properly. Dave said that Chuck was an incredible training partner because he respected the gym, the weights and the equipment greatly. Chuck was taught by the legendary powerlifting coach Louie Simmons to have a critical eye in order to coach every one of this team mates.

Geared and raw All time world record holder Matt Wenning described how Chuck led the greatest squatting crew of all time from the front by an emphasis on technique and ferocity. Six lifters that trained with Chuck at the Lexen Extreme Gym averaged a 1025 squat. Matt always speaks extremely highly of Chuck, the viewer of any of these videos can tell how much reverence Matt has for Chuck. There are a number of YouTube videos on Lexen Extreme, Brandon Lilly, and 360 Cut channels which showed Chuck training ferociously after he left Westside Barbell in approximately 2009. If you have seen the amazing documentary Westside vs the World, you know that Chuck returns home to train again with Louie Simmons and Westside Barbell.

Powerlifting entrepreneur Mark Bell posted a great tribute video to a 1260 lb reverse band squat that Chuck did in preparation for another world record breaking meet shortly after this overloaded training lift. Mark notes that Chuck squatted over 1000lbs in the 220, 242, and 275 lb class.