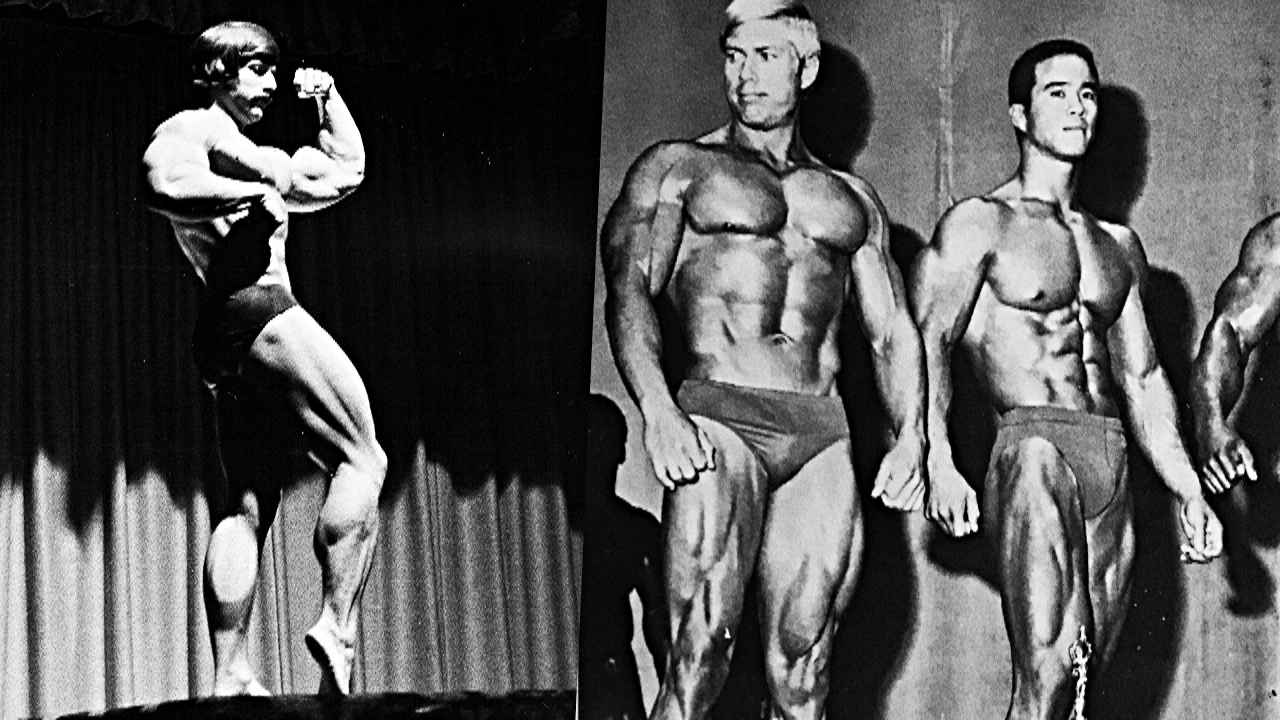 Oldschool bodybuilder Dale Adrian was born in 1951, in Oxnard, California. His first win was the 1974 Mr. Los Angeles contest. In 1975, he won the Mr. California title prior to the Mr. Ameria crown. He then placed second in the medium class at the NABBA Amateur Mr. Universe. In 1976, he placed third at the Universe and second at the WBBG Pro World.

He worked out twice on Mondays and Fridays. This was due to the time factors. Due to his living style (job, home life etc.) He was too rushed on these particular days to perform the exercise schedule all at one time, so he broke it up.

He would begin his training for the contest 6 to 9 months ahead of schedule. He would train 7 days per week about 4-5 hours per day. He worked every body part as heavy as possible and 3 or more times per week.

This following program was just used to peak out and did not build his Mr. America physique. It was a long accumulation of workouts and diet that did this.

We will start off with his diet. About five months before the contest he began a diet primarily of salad, some fruit, meat, poultry and fish with plenty of vitamins and protein supplements. He drank only water in quantities up to 12 – 14 glasses daily. Four weeks before the contest, his diet was intensified to bring out the maximum possible degree of separation and muscularity.

This was basically a beef and water regiment. He ate five to six pounds of meat instead of the popular six small meal plan that many follow. He took supplements with each meal, particularly vitamin-mineral supplements, but he cutted out the protein drink during the last two weeks. This four week diet is used only for a major show and he certainly did not eat this way consistently, but instead partake of a normal and balanced food schedule.

Note: The first three exercises are done without putting the bells down.
Leg Press: not always done 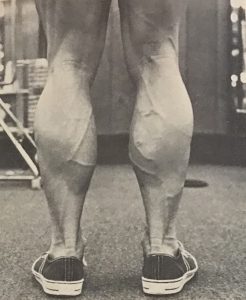 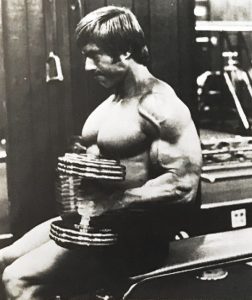 That is the basic routine for his final six weeks of training, but for the last two weeks he made some additions so that he would be training most body parts every day for maximum hardness. These were the additions:

Note: He did not work the lower back, thigh biceps or upper arms every day prior to the contest. The hamstrings are stimulated with squats and the upper arms with back, chest and delt work. According to Dale the lower back can be too easily injured by overwork. This schedule is not for beginners, but only for advanced bodybuilders preparing for a big contest.

His diet would have from 300 to 400 grams of protein, 60-100 grams of carbohydrate and very little fat is included in his diet. About 6 weeks before the contest he will cut my carbohydrates down to 30 grams or less per day and cut out all the fat in his diet. This really has helped him to get cut up. These ever so slight changes in diet seemed to give him the best results when training for a contest. 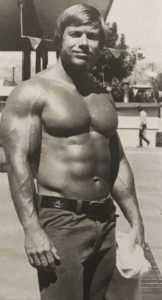 Posing
He only practiced his posing about two weeks prior to a contest. He did his posing routine separate from his workouts. He used to spend 10 to 20 minutes per session every day. Most of the contestant are pumping before posing routine but Mr. Adrian didn’t do that. He cited that it takes away from the cuts.

During off-season he specialized training on weak points very hard. It can take a lifetime sometimes to correct a weakness. Adrian’s back was his weakness, but this was no longer so. After hitting the back very hard it was as muscular as all of his other body parts. During the SPECIALIZATION period whether done in the off season or the competitive season, he would work his back 4-5 days per week.

He used to get stale or burned and that’s why he changed his exercise schedule often. He changed routines every six weeks.He liked to work from the largest to the smallest muscle groups.

Training
After retiring from competing he used to run 6 days a week for a total of 4-5 miles. He performed situps and leg raises daily.  And when was not training for a contest I will train about 2 hours per day and work all body parts 3 times per week. He would not follow any set routine.  He trained according to his mood at the time.

He believed that the majority of the muscle groups are stimulated on reps anywhere from 6 to 10 reps. On the denser muscle groups of the body, such as the calf and forearm, the muscle area responds best to 20 reps or higher per set. Dale did not use very heavy weights in his training programs.

But Dale was indeed very strong when he was at a bodyweight of 210 pounds. He has benched 475lb; squatted 500 pounds and overhead pressed 300 pounds.

Dale Adrian:  “Too many young men train for size’s sake (I was once this way), Biggest doesn’t mean best; train for appearance, not size. It is far better to be a well built (or best built) man than a MUSCULAR MONSTER. There is more beauty in “CUTS” and “SHAPE” than in sheer mass.”

“The MIRROR is the only true guide to PROGRESS. After a while you also get to know your body and this will help you realize your PEAK at the proper time.”