The first thing you notice about Dave is his huge forearm; it is easily in a class with that of Scott, Bill Pearl and Chuck Sipes. He is a believer in working on the forearms as a separate body part and has made them outstanding. But how did he train his arms?

He concentrated each movement so he was getting the proper feeling or pump, as he believed this is vital. He admitted he had trouble with the triceps and noted that he has a hard time getting a pump in it. Here is one of Dave Draper’s routines: 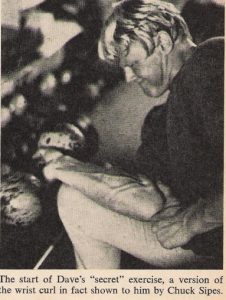 Dave favourite exercise used in the above picture. Dave did not creat this secret movement. He cited Chuck Sipes developed it. It is a variation of the old fashioned wrist curl, using a dumbell. The starting position is the same – the forearm is laid along the top of the thigh, with the hand and lower part of the wrist extending off the end of the knee. The torso is now twisted a bit, to bring the shoulder of the working side closer to the wrist.

Continue leaning forward and to the outside until the upper arm of the curling hand is parallel to the floor, or as near as you can make it.

Dropping the shoulder and upper arm forward in this manner, puts the forearm in an unusual position too. You will notice a much stronger effect on the inner part of the arm and a quick improvement in the “gooseneck” formation when you flex the forearm.

Note: Use the tag system below and click “arm workout” or “Chuck Sipes” for more oldschool training routines! – Mr. Berg