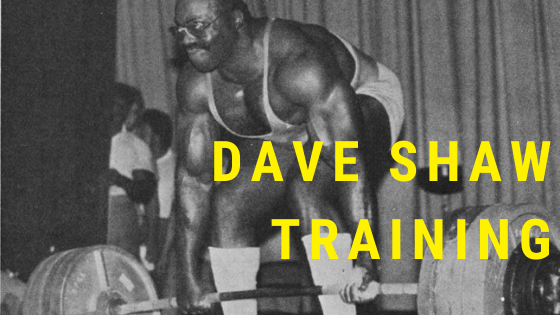 Dave Shaw sent a letter to strength legend Anthony Ditillo. Here is Dave’s training philosphy. He favored the combination of powerlifting and bodybuilding. May he was the pioneer of ‘Powerbuilding’! Have fun – Mr. Berg

When I first picked up the weights, I bench pressed 125lb and squatted 175lb. As most beginners, I wanted to become as huge as possible with muscular size. And I might add, that in the beginning, I didn’t have much trouble putting on muscular bodyweight and as a result of my training, I grew to 235lb by the time I graduated from high school.

I also bench pressed 350lb and had 18 inch arms at this time. Initially, I wanted to train with the weights so as to aid me in shot putting (my high school record still stands,) but the more I trained, the deeper I got into this new preoccupation and in the long run, I finally decided to join a commercial gym. My first choice for a gym was the Pasadena YMCA. It was at this time that I met Richard Kee.

At the time I first met him, he looked to me like the widest shouldered man I had ever seen. And his strength was phenomenal. He wrote routines and diets for all the younger interested trainees and was always willing to give of his free time. It was from Richard Kee that I received my first routines and diet plans. I really owe him quite a bit in the way of thanks. He really helped me a lot.

A popular gym in California at this time was Joe Golds’ in Venice. It was here at Gold’s Gym that I met Steve Merjanian and I credit him with much of my training inspiration and current progress.

Up until I met Steve, I believed anyone who trained solely for power would wind up fat and sloppy, but big Steve really opened my eyes! For here was a man of immense size and strength with excellent muscle shape. It was then that I decided that muscle shape and strength could be combined with somewhat miraculous results in power and physical impressiveness and since this time, I have trained with both these concepts in mind.

I have also come to know Steve quite well over the years, and I must add that although he never trained on three powerlifts with any diligence, he DID train for years with “Peanuts West.” Pat Casey and other Californian pioneers of American powerlifting.

His training knowledge is vast and whenever I have a training problem, he is one of the first people I contact.

I no longer train at Golds’ since it has changed hands. I now train at the World Gym with Dave Johns, whom I credit as helping me in many ways with my training.

My powerlifting goal is to achieve the maximum potential my body is capable of. After I achieve this, I would like to concentrate on other movements, such as the Seated Press, Dumbbell Press, and other heavy pressing movements which are not presently competitive lifts, yet are still impressive and make a person strong.

I feel the powerlifts are fantastic for strength, yet true strength goes beyong three lifts.

I believe muscle size is increased through repetitions with a progressively heaviert work load. I believe in mixing up repetitions. For quality muscle, move from light weights with high repetitions to heavy weighs with lower repetitions.

After you have reached the last set, remove 50 to 70lb. and do several sets of 6 to 10 reps. A well-balanced diet, emphasizing all the food groups will guarantee growth.

Supplements are important, but with the high pitch commercial sales, you could spend your paycheck buying supplements and you still have to purchase groceries. So if you can’t afford the massive supplementation you supposedly need, get a milk and egg protein B complex and wheat germ oil, along with some digestants and some C, and you should be able to get along fine.

As far as diet is concerned, I generally eat but 2 meals per day. I do NOT overemphasize any one food group to the exclusion of others. For optimum health and strength, you must eat those foods that are nutritionally sound.

Try to stay away from junk foods of all kinds.

If you want to improve a lift, go to someone who is good in that lift. This way, you will not train in a hit or missfashion which often leads to disappointment and confusion.

After training for some time with Marv Phillips, I squatted an easy official 760 meet record at the Nationals at Little Rock.

The benchpress to me is the best upper body developer there is and I always make sure that I include enough work for the Bench to insure continual progress. Whil it is not possible for everyone to bench press 500lb, I am sure that everyone can improve beyond his wildest dreams if he will only train regularly and sensibly.

My present bench routine consists of one heavy day and one light day on the bench along with dumbbell bench presses and seated barbell presses.

I work the deadlift once a week, after the light squats on Tuesdays. I do not do reps in the deadlift, since I feel that reps in the movement cause poor recuperation and overtraining.

I believe good deadlifters must continuosuly watch their style for flaws, etc., which may be picked up along the way. Foot and hand spacing are are also very important. 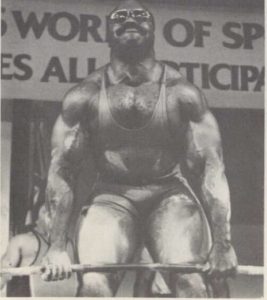 At the ’77 Nationals, I deadlifted 688 with no prior coaching as to my style. One year later, at the ’78 contest, I deadlifted 804lb. This improvement was due partly to training with Marv Philips for the past year and having him analyze my style and correcting any mistakes.

I have used only one other exercise movement for my back. This is the Bentover Rowing exercise with barbell and dumbbell. I believe this is a tremendous exercise for developing for pushing and pulling strength for the bench press and deadlift.

It also spreads ther back, giving it a wide taper. I have used up to 400lb in this movement.

I believe in self discipline and training dedication. You must make up your mind what it is you wish to accomplish and not allow anything negative to stand in your way. You must control your enviroment so that it becomes conducive to steady progress!” – Dave Shaw