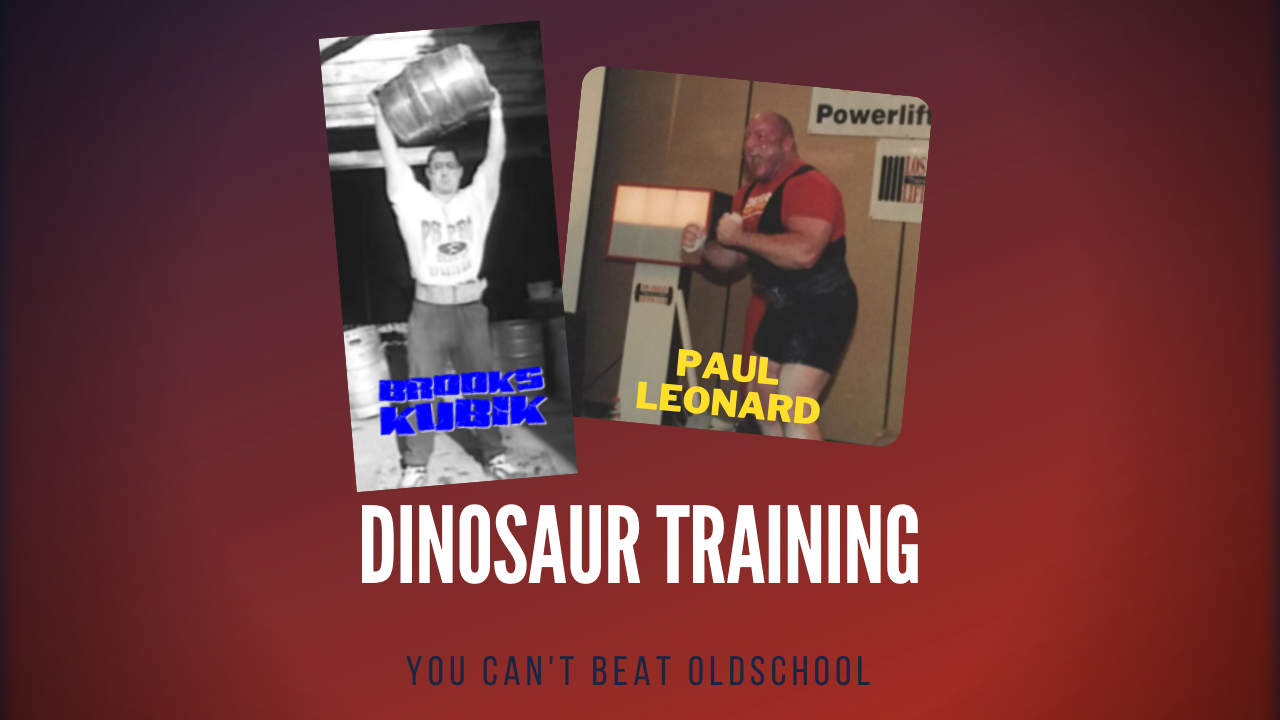 2021 marks the 25th year of the release of Dinosaur Training by Brooks Kubik. Although Mr. Kubik has gone through publicized changes in his training style during this quarter of a century, this article is going to focus on his 1996 book which has had such a profound influence on strength training.

The book is an examination of the correct philosophy that needs to be applied by anyone that seeks to improve their physical strength. Brooks, a lawyer by trade- i.e a paid arguer, certainly knows how to examine an issue from every possible angle. The result of Mr. Kubik’s analysis is a thorough description of all the possible training methods and programs that can applied to forge a body with strength, power, and muscular development.

Dr. Ken Leistner had written about, demonstrated on video and championed hard, intense training in his writings published in Ironman, Powerlifting USA, Muscular Development, Milo, and his own Newsletter The Steel tip- beginning in the early 1970s through the 2000s. Leistner influenced a generation of trainees to include Kubik, and received mention in Dinosaur training, specifically in a fantastic chapter entitled “Death sets!”

The training landscape in 1996, as evidenced by the contemporary Bodybuilding magazines escalating arms race with total pages published along with ESPN,which had numerous bodybuilding training shows in the am were not promoting intense training, odd object lifting, power rack work, grip strength, partials, heavy singles, or thick bar implementation.

Dinosaur training is a self described throat punch to the weak, mainstream training philosophies that were being promoted in the glossy magazines and training shows filmed on the beach.

Just as Dinosaur training rolled off the printing press, ESPN 2 was launched and the broadcasts of the Worlds Strongest Man began, introducing the viewers to log lifting, barrel lifting, sand bag pressing, stone lifting and thick bar implements such as Ironmind’s Appollons Axle.

Milo was promoting dinosaur style training, so a revolution in training began. Today, shows that document how MMA fighters and star football players train have their roots in Dinosaur training. The palatial weight facilities of today, with chains, tires, sleds, odd objects, thick implements, farmer’s walk equipment, and sand bags all were popularized and promoted by Dinosaur Training.

Dinosaur training has programs that are applicable to every level of trainee. When I was totally focused on competitive powerlifting, the chapters on mental training helped me the most, allowing me to total elite in 1998 and finish in the top 5 in the United States in contests between 1996 and 2006. I attribute my competitive successes in the decade following first reading Dinosaur Training to the philosophy of embracing training as hard as physically possible.

Later in my lifting journey, after I had suffered serious injuries requiring surgeries, I was able to come back and set State Records thanks to the rack work programs derailed by Brooks. Allowing me to train without minimal eccentric stress allowed my numerous tendon reattachments to heal and be as strong as prior to my injuries. Rack work coupled with thick bar work, dissipated stress over my joints which took a beating for 20 years to reach the top. I can do higher volume pressing with an axle as well as develop a stronger grip with thick bar curls. The current trend in strict curls was written about extensively by Kubik 25 years ago!

The chapters in Dinosaur training are short, focused and as subtle as a sledgehammer. The book culminates with multiple chapters stressing the mental aspect of correct weight training, with a focus on extreme concentration.

One of my favorite chapters is entitled:

“Do it for yourself.”

In this day of lifting for Internet likes and Instagram posts, this chapter certainly is a common sense approach that is beautifully brutal in it’s simplicity.

I cannot stress enough how much knowledge, inspiration, and physical culture history a serious trainee can learn from owning this book and referring to it frequently. As I mentioned at the beginning of this article, Mr. Kubik sells numerous training books and programs, but you could have a lifetime of guidance in how to correctly change just by following the information in Dinosaur Training alone.