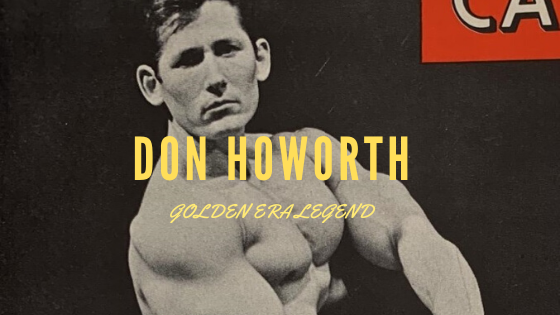 “Twenty-seven year old Don Howorth has blossomed on the horizon as one of the brightest physique stars from the West Coast in many years. Not since the days of Lynn Lyman had a Californian swept the Mr. Los Angeles, Mr. Southern California and the Mr. California contests all in one year.

An early indication of his potential in the bodybuilding game was revealed in September of 1962 when he defeated a field of twenty-six bodybuilders in the annual Mr. Fiesta contest. Don also captured the Best Back and Best Arms subdivisions.

This year, after annexing the Mr. Los Angeles in January, and the Mr. Southern California in February, he capped the climax by defeating such notable physique stars as LeeRoy Saba, Al Sousa, Chuck Pranke, Mike Dadigan, Joe Nista, Von La Mon, Dick Sweet, Alan Albert, Jim Fox and Leon Burks in the biggest and toughest contest in the West.

Ray Van Cleef, one of the best known weightlifting and bodybuilder authorities in the county, commented that he thought the level of competition in this contest was the best he had seen since the ’61 Mr. America. 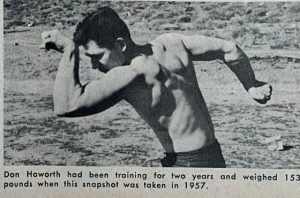 The bodybuilding career of Mr. California began in his garage in the summer of 1955. It was a set of York weights, inherited from an inactive buddy, that launched Don on his way. Progress was slow but encouraging that first year of training at home.

He later joined Vic Tannny’s Alhambra gym and was helped along by Bob Bardmess for a year or so.

Don was still training rather casually at this point with no definite plans other than gaining weight.

He continued to work out three times a week for the next couple of years and he began to show real promise as a bodybuilder. In May of 1960, he joined the Pasadena Gym and began to think seriously about entering physique competition. Four months later he entered his first contest and placed a somewhat disappointing fourth in his height class.

This I believe was the turning point in his bodybuilding career, for he began training in earnest right after this contest – six days a week!

His training partner, Richard Kee, a 240 pound giant with a fantastic physique, who has bench pressed 525 in strict style, helps Don with his training programs.

Kee, who is one of the best bodybuilding trainers around, has planned nearly all of Howorth’s workout schedules for the past three years. The amazing progress Don has made since joining the Pasadena Gym is certainly proof enough that Richard Kee’s advice was sound.

Originally, it was gymnastics that first made Don aware of his physical development. At Mark Keppel High School in San Gabriel, California, Don competed on the gymnastic team for four years and was a standout in free exercise, high bar and tumbling. Along with weightlifting champion Lee Phillip’s younger brother, Jim, he placed his team to an outstanding dual meet record in his senior year.

He placed fifth in the California Interscholastic Federation Gymnastic Championships (over 300 high schools represented) in the thumbling competition. He also placed in the top six in the Southern California Novice Championships in the free exercise event.

A rather promising future in gymnastics awaited Don until he received a severe back injury one day while tumbling. It seems that after years of doing some of his more difficult stunts, the strain of always taking off from the same side of the mat created an uneven development in his erector spinae muscles resulting in frequent back injuries.

His doctor advised him to give up the sport or his back would never be normal. It was at this time that he started barbell training to strengthen his back and improve his physical development.

This likeable physique champion is currently as a precision parts machinist. He has a real knack for anything mechanical and one of his hobbies is building radio-controlled flying model airplanes. His interest in this was no doubt cultivated while serving eight years in the Naval Air Reserve. Although he was assigned to ordnance, he has flown in the famous “Shooting Star” jet on several occasions. 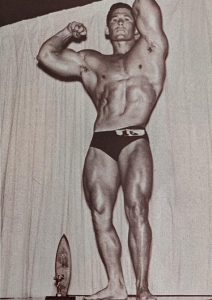 He credits weights training with saving him from serious injury during a routine sixty-hour check of a special ejection seat from one of the jet fighters. It seems that his assistant forgot to apply the safety lever on the seat and it suddenly ejected from the cockpit while Don had a very secure grip on it. He traveled about fifteen feet up in the air before he could let go of the seat and landed almost head first on the wing of the plane; the ejection seated landed 200 feet away on top of a hanger. Don jokingly mentioned that he was almost our “first man in space.”

Don’s plans for the future include following in the footsteps of his father, who is employed as a Chief Engineer for Northrop Aviation. Don is currently attending college (evening classed) to obtain an engineering degree in the eletronics field.

This month’s Strength & Health coverman has several interesting hobbies other than the one mentioned, including a gun collection which he shares with his father (one of their guns is a squirrel rifle which was made during the Civil War), and skin diving.

Don once descended to the depth of 150 feet with a diving lung. He recalled that while making this deep dive he received the scare of his life when suddenly a big black sea bass, which must have weighed over 200 pounds, began moving in his direction. Fortunately, the giant bass took only a brief look at him and wandered off, to Don’s great relief.

One of the qualities about Don that I admire a great deal is his willingness to help others.

He readily answers the questions posed to him by beginners at the gym and is most helpful with advice on both exercise and diet.

His interest in helping the local youngsters at the Jefferson Park Recreation Center in Pasadena is evident by the fact that he often assists Director Bob Riher with the nightly weight training and physical fitness classes.

Don has also volunteered his services on a number of occasions for weight training demonstrations at the local YMCA and Boys’ Clubs.

Don’s beautiful wife, Patricia, is quite proud of her famous husband. In addition to being an excellent cook and preparing only the most nutritious foods (primarily organically grown foods whenever possible), she also encourages him in his bodybuilding aspirations.

Hard, fast workouts are preferred by Don and he uses maximum poundage in every exercise as evidenced by his strict 380-pound bench press, a perfect strict 180-pound curl and a press off the rack of 270 pounds. His workouts last about three hours.

One of his favorite exercises is the power clean in which he works up to five singles with 250-260 pounds.

Don’s impressive 5-foot, 10 1/2 inch frame carries 195 pounds with amazing balance and symmetry. Massive, yet extremely well proportioned and shapely with good definition, he looks every bit a champion whether perfectly relaxed or on the posing platform.

His shoulders, which are exceptionally broad and impressive, feature perfectly developed deltoids. Don seldom picks up the tape measure and is rather modest about his huge measurements, which include over 18-inch arms, 50-inch chest, 26 inch thighs and 17-plus calves.

Where ever he goes, Don sets an example that all bodybuilders would do well to follow. A gentleman, family man, industrious and intelligent, he has a warm friendly personality that all admire.

He is quite modest about his accomplishments and is continually striving to improve both mentally and physically. In addition, his great physique and fine athletic accomplishments certainly make him the ideal “All-American” man. He is well suited to that old Greek axiom, “A sound mind in a sound body.”

Many he continue to be successful in all his endeavors…no one ever deserved it more.”