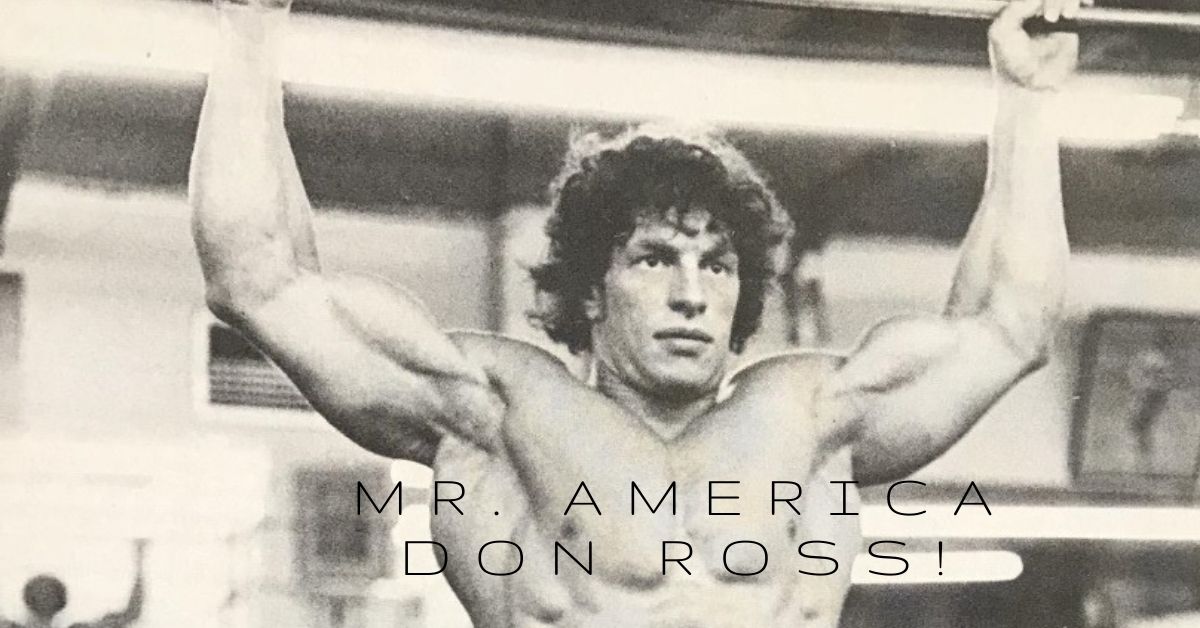 Don Z. Ross (October 6, 1946 – June 2, 1995) was a professional bodybuilder, wrestler and weight training coach from California. He performed under the names ‘Ripper Savage’ and ‘The Bronx Barbarian’.

He has won numerous bodybuilding titles throughout the United States, including Pro. Mr. America; America’s Most Muscular Man 1975, 76 and 77; IFBB Pro Universe 1975 for his class.

He started lifting weights when he was 14, mainly to get in shape for sports. Then his interests turned to competitive lifting, but he did not get serious until he was about 16. He began reading the national magazines. At the time he remember reading a lot about Bill Pearl, Harold Poole, Larry Scott and Freddy Ortez.

The following training and nutrition philosophy was developed by Mr. Ross. Have fun!

Diet
The main foods in your definition diet should be high protein foods: eggs, meat, fish and fowl. Eat these three times a day and just after your workout. Eliminate exceedingly fatty cuts of meat, pork and breaded foods.

For extra protein take a 90 per cent (or more) protein supplement. Also include liver in your diet. Desiccated liver tablets will do as your daily liver ration.

This food is high in protein and contains an element for increasing your stamina. Milk and dairy products are high in protein, but go easy on these, as they have a tendency to smooth you out.

Use low fat (not skim) milk and low fat yogurt. Yogurt with fresh fruit is a good substitute for ordinary dessert.

A typical day’s eating on your definition diet looks like this:

Use very little salt while working for maximum definition. Salt will cause you to retain water and cause bloated, puffy tissue.

According to Do Ross to burn off the excess fat that hides your definition, you must run. This is the best single exercise. It exhausts the largest muscle groups of the body, the legs, causing fulfill the demand for your rapidly burning oxygen supply.

For bodybuilding purposes, Don Ross has found it best to run one mile, three days a week. Begin by running a quarter mile and increase your distance each time until you are doing a mile.

After you are used to the mile run, try to imrpove your time on this run. When you complete your run, do three sets of high repetition pullovers while you are still winded. Use a light barbell and breathe as deeply as possible. A huge inhale as you let the weight back and a complete exhale as you bring the weight back over your head.

Don Ross liked to run on his training days immediately after his workout.
with your weight training program, you will also be developing your cardiovascular system. This is done by cutting down on your rest periods between sets. Make a conscious effort to breathe deeply between sets.

Training Routine
The exercises you use to attain the greatest cuts and definition have to be the most specific. They have to bring out each and every muscle fiber of each group. To do this, you will utilize two workouts.

The first workout will be done three days a week with at least a day in between. In it, Don Ross has chosen exercises designed to isolate each muscle group. Start each exercise using a weight that you can do ten reps with. Force as many reps out of it as possible on each and every set. Rest only seconds between sets. When you are down to five or six reps, use less weight for your next set. Really concentrate on each and every set; force those muscles to the surface with each effort.

* Don’t stop at this number of reps if you are capable of more maximum reps with each set!

Two of the alternate days, use isometric exercises. These will really force those little-used fibers generally missed by standard exercise, into use.

Do each exercise at three positions. First, a little ways into the movement. Second, half-way into the movement. Third, near the end of the movement. Time yourself with a clock with a second hand, or better yet, have someone else tell you when to start and stop. Hold each movement at absolute maximum tension for eight seconds – then release slowly. This entire routine will last only a few minutes, but the pump is great.