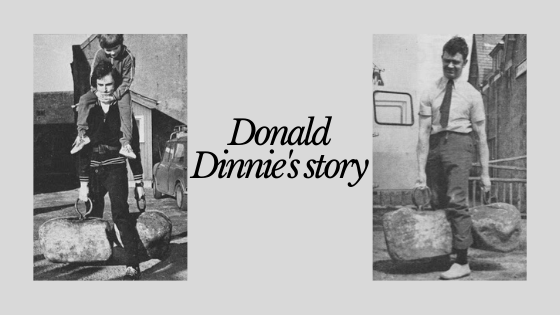 At the end of the 19th century Donald Dinnie was king-pin of professional athletes. In Scotland there are only a few national heroes of sport, but the name of Donald Dinnie is legendary.

To every true Scot the name conjures up visions of a well built kilted figure such as is seen on the popular Sots poridge packets and to followers of Highland Games his records are well known.

Most of Dinnie’s record have been broken and such theories advanced by his supporters as improved sports ground and equipment. However one feat of Dinnie’s remained unequalled.

At the bridge of Potarch, outside the Hotel, lie two big boulders with iron rings attached. Originally used for tethering horses Dinnie had picked up one in each hand and accried them quite a distance, each stone weighing over 3 cwt.!

At the Music Hall in Aberdeen the crowd was on its feet roaring as a young hercules ran, yes RAN, round the stage with one of the boulders carried in his left hand!

That night big Henry Grey, a strong man athlete of the modern school proved that good though Dinnie was his feats were not byond the enthusiasts of the present day with knowledge of progressive training at their disposal.

One thing however must be acknowledged, Dinnie was one of the best, if not the best all round athlete ever produced in this country.

He could put the shot, toss the caber, jump, run, lift weights, swing clubs and wrestle with the best of them.

The might professional travelled all over the world to America, Canada, New Zealand, South Africa, Cape Colony and Natal winning a fortune in the process.

Quite often he would win hundreds of pounds in a single day and would receive 25 – 100 £ to appear at sport and to his fee the prize money was added!

Frequently he took first attempts only in the field events and proceeded to compete on the track. His feats of strength were much admired and after being inspired by the Italian strong man Napoli he went on to win over 200 weightlifting contests.

In all over 11,000 competitions were won by this amazing ahtlete and his many trophies and medals are still popular display pieces in pubs and clubs throughout Scotland.

Dinnie was a sun lover and invariably had a wonderful tan which went well with a physqiue which would be envied by many of our present day stars. His chest stretched the tape to 48 inches, biceps 16 1/2 inches, calf 17 1/4 inches, thighs 26 1/2 inches at a weight of 15 st. And height of 6 ft. 1 inch. Remember lads this was at the end of the 19th century when Bench Presses and Slow Curls were unheard of.

From all this you will gather Donald was quite boy but how does his perormances compare with present day stars?

This brawny lad could put the shot 50 ft. 6 inches, throw a 56 lb. Weight 29 ft. 7 inches. Without any preliminary travelling across the circle as allowed in present day events he put a 28lb stone 32 ft. 10 inches.

Threw the wooden shafted 16lb hammer 138 ft. 8 inches. Held a 56lb weight for 45 secs. Horizontally in the palm of his hand. In the high jump his best performance was 6 ft. 1 inch.

Amongst other feats Dinnie is reported to have performed are 100 yards sprint in 10.4 secs. He also shouldered a pair of dumbbells, one weighing 128lb. And the other 112lb which he lifted overhead.