Doug Hepburn: King of the Curl! 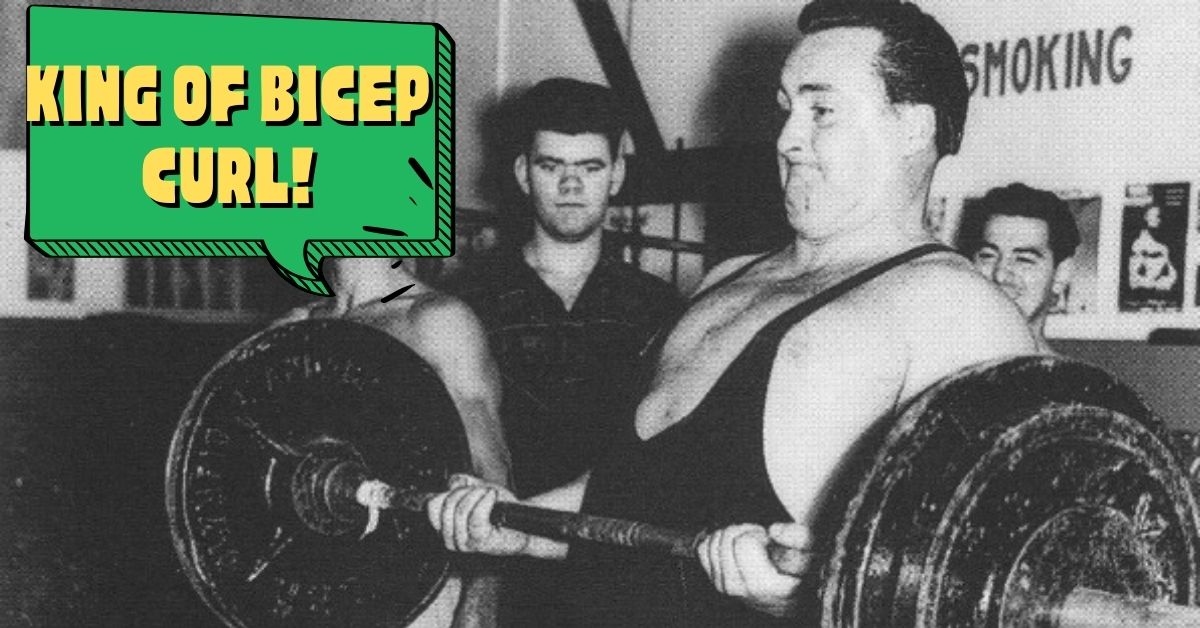 Over 70 years ago, one of the strongest men of his time, Doug Hepburn was able to curl 255lbs/115kg! This curl was done in 1959. For contextual purposes, Doug Hepburn was the 1953 World Weightlifting Super Heavyweight Champion, with a then highest total ever of 1030 lb total. I think that gives the reader a good understanding of the strength of Hepburn. Doug’s all time best strength performances all occurred while he was 285lbs and had an arm measurement of 21.5.” 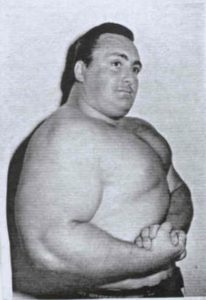 An Ironman article ‘Developing Curling Power’ written by Doug in March, 1961 explained his training philosophy in building such amazing curling strength. This fascinating article begins with an extremely detailed description of how to grip the bar, specifically the best grip width and wrist position to take to begin a correctly performed set of curls.

Hepburn described curl grip width as different for each individual, with the hands being just outside contact with the thighs when the bar is help. Doug said that a false grip should never be used when curling and that the bar should be gripped as close to the wrist as possible-this will give the lifter the best leverage possible.

Doug’s words from his 1961 piece, tell the lifter to perform each rep with as much explosive power as possible. The faster you begin a repetition from the starting position, the greater the chance you will power through the sticking point. Also when you curl explosively there is less chance that your form will deteriorate to a lean back position. Keeping the elbows in as close as possible to the sides was stressed by Hepburn, as well as not exhaling the breath you took prior to picking up the bar until you were past the sticking point.

As for sets and repetitions, Doug found that a series of low repetition sets combined with a limited amount of heavy singles will result in the greatest lifting strength. To warm up for his series of repetition sets, Doug would begin with a set of 5 reps then increase the weight so that a single can be comfortably curled. Hepburn told Ironman that he was rest for 3 to 5 minutes between repetition sets and singles. Doug would add weight and do a single, then add more weight and do three singles. His goal was to build up to 5 singles with the weight he curled for 3 singles. Hepburn heavily stressed progress and said that the lifter should continue with the 3 singles- progressing to 5 singles indefinitely. The aforementioned warm up curls should be adjusted proportionately as a lifters singles increase.

Hepburn described a variation of his curl program in which he would focus on 3 sets of 3 reps- building these sets up to 5 sets of 5 repetitions. Both Doug’s programs were as simple and brutal as a throat punch.

How many lifters today do you see strict curling 255 lbs? 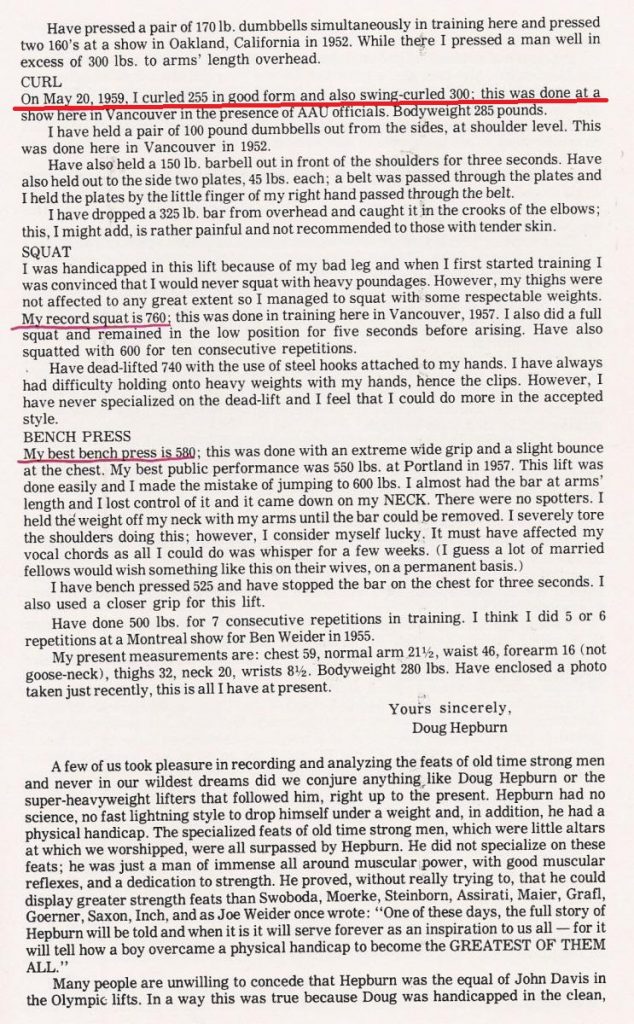 On that day in May 1959 he did his monster strict curl,

Simple works and is beautifully brutal. Hepburn’s curls are documented as the heaviest on record done with a straight bar, as many heavy curls were done with EZ curl bars.

A history of the curl

I had the pleasure of training with CT Fletcher at the American Eagle Gym in Norwalk, California in 1993 at the time he held the recognized world strict curl record of 232lbs. CT’s arms were in the same class as Ted Arcidi, Ryan Kennelly, and Greg Kovacs as the biggest arms I have ever seen.

Bill Kazmaier, Arnold Schwarzenegger, Larry Wheels, and CT Fletcher are known for their ponderous curl poundages, with Russian Denis Cyplenkov receiving credit for the all time heaviest strict curl with 249lbs, as seen on more than a few YouTube channels because everyone loves the curl. Although it is rumored that Kazmaier curled 440lbs, there is no documented proof of this alleged feat, as opposed to most of Katz’s strength records which occurred at the WSM or National Powerlifting Championships and are beyond question.

The owner of neckberg.com reported that he recently watched a YouTube video in which Golden Era Strength historian Ric Drasin interviewed Chuck Mahoney who claims he saw Strength legend Chuck Aherns do three concentration curls with 185lbs. There is no documented proof of this claim but it is interesting none the less.

Arnold Schwarzenegger curled heavily to build the best looking biceps in history, with noted German strength historian telling this website’s owner that in 1966 Arnold did a Powerlifting contest at which he squatted 150 kilos, benched 140 kilos, and curled 100 kilos.

Hepburn is credited by Wikipedia with a 260lb curl, while he did a 255lb curl at a competition that was administered by the AAU in 1959. According to the website American Powerlift Evolution. Net, the first AAU sanctioned curl contest was in 1954. Within 5 years of it’s origin, the Canadian Colossus of Curls was the World Record holder!

Magazine mogul Joe Weider said this to describe Doug Hepburn: “A few of us took pleasure in recording and analyzing the feats of the old time strongmen and never in our wildest dreams did we conjure up anything like Doug Hepburn. Hepburn had no science, no lighting fast descent to drop under a weight and in addition he had a physical handicap. The specialized feats of old time strongmen, which were altars at which we worshipped, were all surpassed by Hepburn. He did not specialize on these feats; he was just a man of immense all around muscular power, with good muscular reflexes, and a dedication to strength.” Weider continued: “ He needs no experience, no years of specialized training, he can just do them.”

3 thoughts on “Doug Hepburn: King of the Curl!”