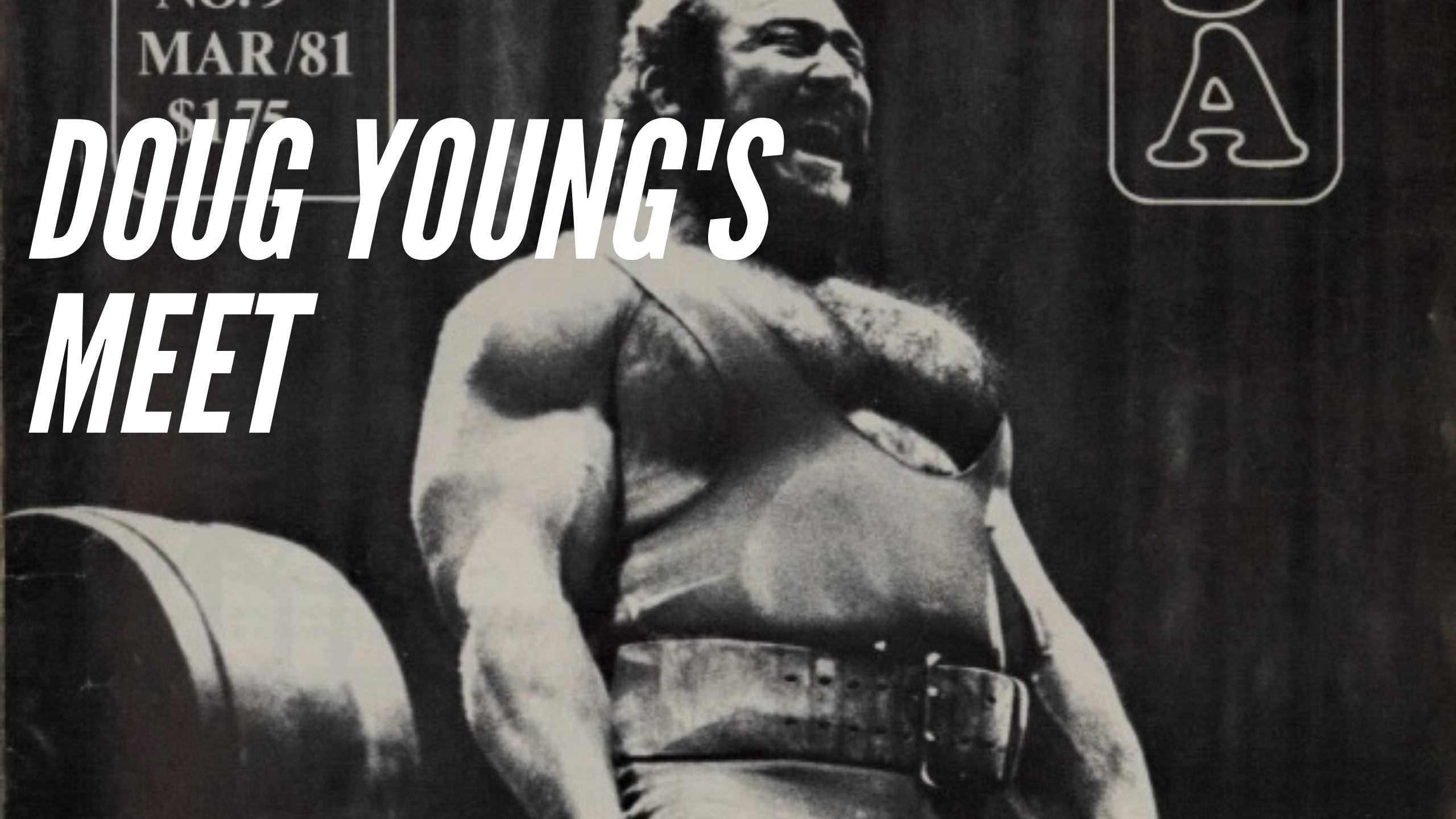 Everyone who is seriously interested in powerlifting history will be familiar with names like Doug Young and Bill Kazmaier. The following cover-shot of Doug Young is famous but it seems nobody knows the story behind this picture. The picture was taken during Doug Young’s Powerlifting meet and here’s the background story (source: PL USA 1981) – Mr. Berg

“Doug Young’s meet seemed doomed only days before it was take place…few entries had been received, and Doug did not want to be stuck with a load of meet t-shirts and trophies and no one to give them to. Fortune smiled, and several key people kicked in their support to make the meet a success. Taking care of business at Doug’s ortnate gym in Brownwood also dominated his time in the two weeks prior to the meet…effectively eliminating any productive training for Doug and his new partner Tony Johnson in that time period…(as Tony said ‘we may not be strong, but we’ll be fresh..when meet time rolls around..’).

Even as the meet was underway, difficulties continued to plague Doug..the British lifters didn’t show…Bennett Clayton and Marv Phillips were not coming…the lighting wasn’t right in the auditorium..seemingly a million loose ends had to be taken care of.

As many of the finest Texas lifters went through their paces…(Dean Becker looked gigantic at a full 220…may have torn his biceps on a big DL attempt…Paul Brodeur seems like a real corner at 275). Kaz seemed to be in another meet altogether. 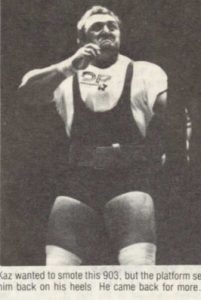 Discussions with Tony Fittin for the past few days had centered on whether he should go for 975 at this meet or take a shot at a full grand..1003. He came out for his opening squat after all the dust had cleared and requested 903. Problems with the platform…a little wobble here and there, had foiled Tony Johnson’s WR attempt of 815 in the squat…and, in shocking fashion, it did the same to Kaz. He hadn’t even begun his descent with the weight, when it whipped it’s way right off his back and crashed to the decking. He took it once again, descending awkwardly..and dumping the bar at the bottom. He arose, embarassed, and told the crowd that was all for the day. 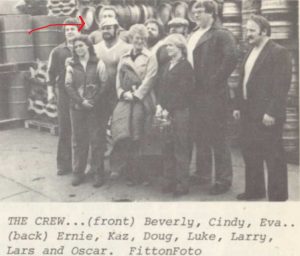 Fortunately, he meant that was all for the squats. Despite the pec pull, he wanted to get in some benches, and as Doug Young worked his way up to a nice 573 2nd attempt success, Kaz jumped in for some easy reps.

Then, he called for the poundage of 600..most folks thought this was the big single they had hoped to see, but Kaz had much more in store..with this amount of weight he could flare his elbows out, take the stress of injury, and go for some big reps.

And that’s what he did. Five solid reps..with his cannonball delts steering the bar up and over his face and his slablike pecs and triceps providing the thrust…for rep after rep.

After passing his 3rds in both squat and bench, and pulling 666 rather tenatively, Doug Young’s comeback effort looked bleak. He need a 744 deadlift to qualify for the Seniors and showdown time brought out the fire in Doug….he ripped the weight up, letting loose with something between a laugh and a roar at the top..the Bear from Brownhood is still in the hunt.

Kaz continued his exhibition with 815 and jumped to 887. Not an official World Record, but the card holders were seated anyway. The weight moved up strongly to the 3/4 mark and stuck..thus ended the odyssey that had taken him half way across the country. At Doug’s post meet banquet, Kaz laughingly spoke of finding another meet, perhaps Vegas, to have another go at the bench mark, but the magic period in his life had passed, and he had grabbed much gusto he could…Long Live the New King of Supers…BILL KAZMAIER..”

Above Man Alive! 600lb for Five! Here Kaz is seen driving out that last rep of a most magnificent set.