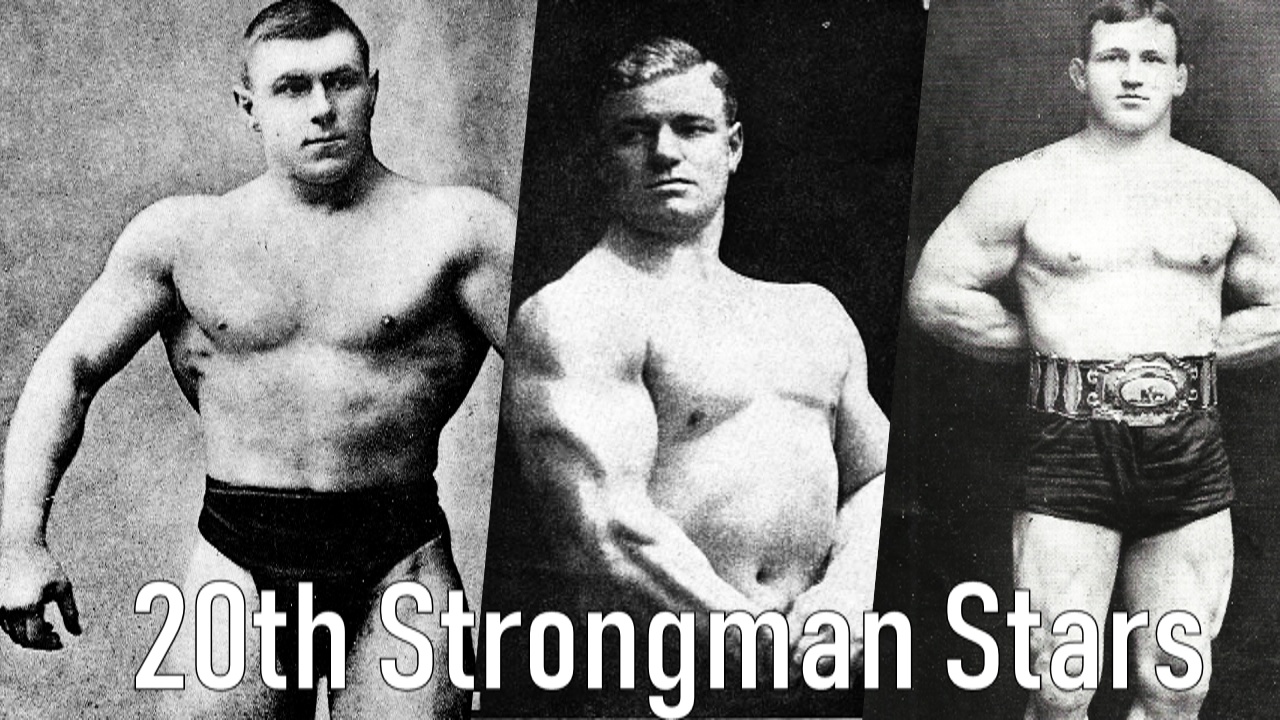 As America entered the 20th century, squats and deadlifts were relatively neglected movements and a bench was something you sat on to tie your shoelaces. Weightlifting as a sport wouldn’t be well organized for at least 30 more years and the strength arena still belonged primarily to professionals.

Over in Europe things were a little different. Although strongmanism was likewise in full flower overseas, amateur weightlifting had also been around since the 1870’s. Prior to World War I however, there was still considerable debate over which lifts to sanction. 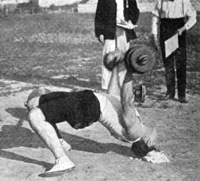 Above: American lifter Oscar Osthoff at the 1904 St. Louis Olympics.
From its mid 19th century roots through the close of World War I, weightlifting in America continued to stumble along in relative disarray. In 1904 America hosted the third modern Olympics in St. Louis and even had a curious 11 lift amalgam as part of the “light athletic events”. The Olympic weightlifting participants would have to perform a total of 9 one-handed lifts, a single two-handed lift plus an additional optional movement in order to post a total!

Despite its Olympic involvement, American weightlifting was still badly in need of a national governing body. For several more years however, the sport remained locally organized by various athletic clubs. In particular, clubs from New York and Los Angeles had a significant impact on iron sport evolution during these years.

In his 1911 book The Truth About Weightlifting, American physical culture pioneer Alan Calvert states that he had never seen a deadlift performed in this country although he thought that the Germans and French practiced the lift. He also mentions the deadlift world record being around 650 lbs at the time. (It’s possible that he was referring to Julius Cochard’s record.) That same year deadlifts were listed as one of 42 official lifts recognized by the newly reorganized British Amateur Weight Lifting Association. 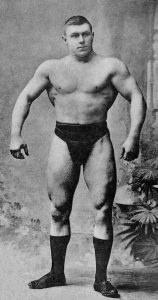 While bench pressing as we think of it did not exist until the 1930’s, two variations of the supine press (often erroneously referred to as the “prone” press) were being practiced long before the turn of the century: the press on back either with or without a “bridge”. Both lifts were executed while lying on the floor and ended with the weight locked at arm’s length above the chest. A back and leg arching maneuver or “belly toss” was how one started the press with bridge. 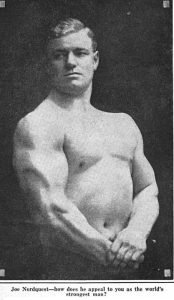 One of the first acknowledged record holders in the press on back w/o bridge was the famous Russian wrestler/strongman George Hackenschmidt. In 1898 he pressed 361 lbs in this manner (with 19″ diameter plates) and it stayed in the record books for 18 more years. He was eventually exceeded by Joe Nordquest, a heavyweight who pressed 363 lbs in 1916 (while using 18″ diameter plates). 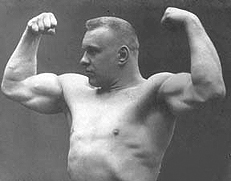 A year later Nordquest would also set a record of 388 lbs in the belly toss, breaking the previous 386 lb record of German strength phenom Arthur Saxon. Among the heavyweights, an early record holder in the belly toss was George Lurich, a Russian wrestler who did 443 lbs in 1902.

And what about the back squat? In America at least, it seemed very few people were practicing this lift before the 1920’s. To build up their legs, physical culturists of this era preferred alternatives like the leg press, hack squat, and straddle lift. America’s attitude towards the squat would soon change however, thanks to some folks from the other side of the Atlantic. 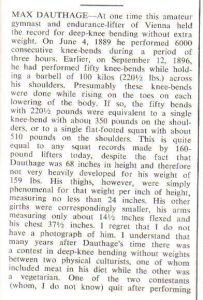 Over in Europe, the back squat had long been a training mainstay for strength athletes. One early squat record was set by Max Danthage of Vienna Austria, who did 50 deep knee bends with 220 lbs in 1896. Three years later in Copenhagen Denmark, H.P. Hansen bettered this mark by doing 65 squats with 277 lbs. Why were Europeans working legs with these “ultra-high” rep schemes and relatively light weights? One reason might have been the lack of squatting apparatus: there would be no racks or stands to put the bar on for several more years to come! For further insight into training methods from the turn of the century. 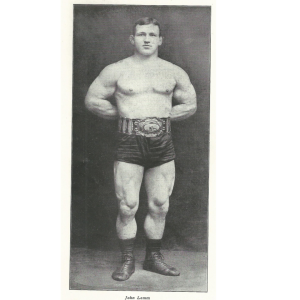 Lemm wrestled 15 minutes, to a draw, with Frank Gotch, Champion of the World, who had defeated Hackenschmidt for the world title. He was one of the first men to place, unassisted, over 500 pounds on his shoulders and do deep knee bends. Lemm’s world’s record of 517 pounds in this lift stood for over 20 years. 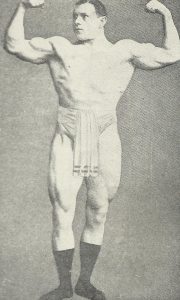 Turning the power of his mind and body to wrestling. George won the European Greco-Roman heavyweight title in 1898 and world title in 1901. In just two months in 1901 he won three world class tournaments in Moscow, Vienna, and Paris.

A good deadlifter, in 1917 he pulled an oversized barbell weighing 638 lbs several inches off the floor. Adolph stood 5′ 8″ and his weight fluctuated between 200 and 230 lbs.
He was one of three weight-lifting brothers of the Nordquest family of Ashtabula, Ohio, The other two athletic brothers were Arthur, who was older than Adolph, and Joe, the one-time world’s record holder in pressing weights in a ying position 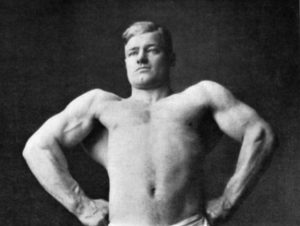 The brother of renowned strongman Adolph Nordquest, Joe (1893-?) lost part of his left leg in a childhood accident. This did not stop him from developing into one of the strongest men of his time: a left arm bent press of 277 lbs, a world record press on back without bridge of 363 lbs in 1916, and a world record belly toss of 388 lbs in 1917. 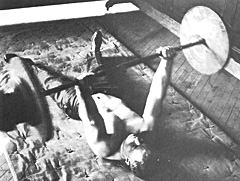 Later that year he also did an unofficial 401 lbs in the belly toss. Nordquest did both records while weighing 180 but eventually rose to over 200 lbs bodyweight. He was 5′ 7″ tall. Pictured above is a 371 world record press on back set in 1916.